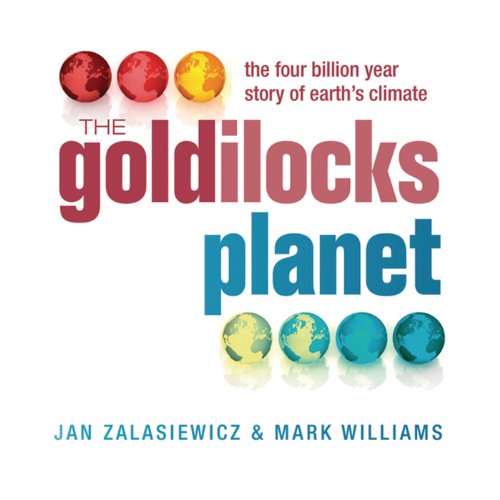 By: Mark Williams,Jan Zalasiewicz
Narrated by: Mark Ashby
Try for £0.00

Climate change is a major topic of concern today and will be so for the foreseeable future, as predicted changes in global temperatures, rainfall, and sea level continue to take place. But as Jan Zalasiewicz and Mark Williams reveal in The Goldilocks Planet, the climatic changes we are experiencing today hardly compare to the changes the Earth has seen over the last 4.5 billion years.

Indeed, the vast history that the authors relate here is dramatic and often abrupt - with massive changes in global and regional climate, from bitterly cold to sweltering hot, from arid to humid. They introduce us to the Cryogenian period, the days of Snowball Earth 700 million years ago, when ice spread to cover the world, then melted abruptly amid such dramatic climatic turbulence that hurricanes raged across the Earth. We hear about the Carboniferous, with tropical jungles at the equator (where Pennsylvania is now) and the Cretaceous Period, when the polar regions saw not ice but dense conifer forests of cypress and redwood, with ginkgos and ferns. The authors also show how this history can be read from clues preserved in the Earth's strata. The evidence is abundant, though always incomplete - and often baffling, puzzling, infuriating, tantalizing, seemingly contradictory. Geologists, though, are becoming ever more ingenious at deciphering this evidence, and the story of the Earth's climate is now being reconstructed in ever-greater detail - maybe even providing us with clues to the future of contemporary climate change.

And through all of this, the authors conclude, the Earth has remained perfectly habitable - in stark contrast to its planetary neighbors. Not too hot, not too cold; not too dry, not too wet - the "Goldilocks planet".

What listeners say about The Goldilocks Planet

A well presented synthesis of evidence for the earths climate history. It brought my knowledge of the subject of the roles of tectonics, celestial events, geological, and natural processes such as weathering, and much more together to help me understand the various positive and negative feedback loops that are believed to keep our climate within habitable ranges. And it provides information as to how our habitable climate may have developed. But most of all it discusses how us humans might be presently disturbing this balance by releasing carbon which has been sequestered at different ages within a tick of a geologic time.

I wish some of the graphics had been released with the audible book as an accompanying PDF. That's the reason for the overall. The reader was a bit too fast for me to consistently catch all the information presented.