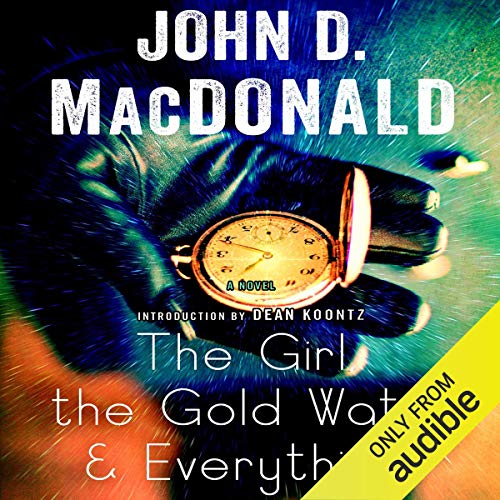 The Girl, the Gold Watch & Everything

By: John D. MacDonald
Narrated by: Stephen Hoye
Try for £0.00

Once an ordinary math teacher, Omar Krepps developed a knack for gambling, amassed a fabulous fortune, and spent the rest of his life traveling the world and giving away his millions. Upon his death, however, Krepps bequeaths nothing to his nephew and only living blood relative, Kirby Winter - nothing, that is, except an antique watch and a sealed letter to be opened after one year. But Kirby has much more in his possession than he realizes. The watch has the power to manipulate time. Not only does this revelation shed light on the mystery of his uncle’s life, it puts Kirby on the path to unimaginable wealth and a new lease on love - as well as a whole host of deadly troubles. Even in a universe where time is no issue, Kirby must tread carefully to stay one step ahead of danger.

What listeners say about The Girl, the Gold Watch & Everything

A word of warning to the uninitiated -- this is NOT an unabridged reading of The Girl, The Gold Watch & Everything. The novel begins in epistolary fashion, with a letter written by one Sam Giotti, to his superior, a man named Fred. It is completely omitted from the Audible version. The letter runs a full four pages in my paperback edition,and lays much of the groundwork for what comes ahead, especially in alerting the reader to how the book will end. It's absence in inexplicable.

Otherwise, this is a fine reading, done in a nice, somewhat laconic fashion, by Stephen Hoye, with one major exception: his take on Bonny Lee Beaumont. A "hillbilly" from the South, Bonny Lee speaks with a strong accent, and it reads wonderfully on the printed page but comes across as stilted and mannered when acted by Hoye. He seems to be using a standard "southern" accent for Bonny, and in never really works. I live in the South and I don't know anyone who sounds like this.

A Touch of Sci-Fi and Romance

This is one of the two works of Science Fiction written by the author in his long prolific career. It also contains elements of Romance and Fantasy genres. Toby Kwimper awakens to the loss of his Uncle Omar and the knowledge that his inheritance consists of a warehouse full of junk and an Uncle Omar's stopwatch. As he stumbles through the next few days trying to figure out life until he meets the 'Hillbilly Girl' Bonnie Sue Beaumont. Bonnie Sue who has lived the opposite lifestyle from the protected, directed Toby. A teenage runaway she's had to make her own since she was a young teen and isn't about to be bamboozled by this city slicker Yankee. Thus their adventure began.
This book isn't just about a magic watch; it's about finding friends and people you can depend on in tough times. More than fifty years later there is still a message of value in this book.

I had never read any John D MacDonald books before Audible introduced me to Travis McGee. After devouring the Travis McGee series, I have set out to read everything that I can that was written by MacDonald. I had heard rave reviews about this book from a friend years ago but until recently I had no idea that John D MacDonald had written it. Listening to this book was pure joy. Yes, some of the romantic dialog sounds silly today, but that doesn't make the book less enjoyable. I was also pleasantly surprised that the physics of altering time was so well thought out. I certainly did not see any of that in the made for TV movie, but being a Larry Niven fan, this touch made me enjoy this romp of fantasy all the more.

Would you try another book from John D. MacDonald and/or Stephen Hoye?

I have read read all John D novels, including this story, and I enjoy revisiting his characters in audio form. I would not try another reading from Stephen Hoye, however. Fortunately, the narrator of the Travis McGee novels is excellent so I will continue to listen to those as they become available.

What was one of the most memorable moments of The Girl, the Gold Watch & Everything?

What is this, a test to make sure I listened to the book?

Stephen Hove is a talented reader but in this case his overly dramatic reading was unsuited for the story -- needs to dial it down a few notches.

Did The Girl, the Gold Watch & Everything inspire you to do anything?

Who wrote these questions, what inspired them to do so, and what in the world are they seeking to accomplish? Seems to me this just discourages comments. The Amazon comment system makes much more sense.

A fabulous tale that still works in spite of being 50 years old. I've loved it since I first read it in the 60s. A great complement to the Travis McGee series.
Narrator was not quite up to snuff, but didn't ruin the story either, thus the 3 star rating.

A dated but fun story

If you could sum up The Girl, the Gold Watch & Everything in three words, what would they be?

The concept is well thought out and works well as a story device. The possibilities are endless.

Have you listened to any of Stephen Hoye’s other performances before? How does this one compare?

I have not listened to his other performances, but he seemed to take this, since it was a John D. McDonald book, as a hardboiled detective story. The performance was fairly rapid and clipped - as you might expect in a pulp detective story. This was, while unique in this genre a little odd at the start. However you quickly get used to it.

It was made into a film and I believe the tag line was: Time Takes A Time Out

As stated in the foreword by Dean Koontz, some of the characterizations of women are quite dated and border on the misogynistic. If you can get past that and accept it for a story from that period of time when this was considered normal, it is a fun read. This is a light and pretty enjoyable fantasy story. If one has to compare it to the mystery genre that the author is best known for, this would be closer to a Cozy rather than a hard-boiled detective story. Recommended if you can get past the early 60's characterization of women.

I first read this in High School and enjoyed it immensely. I as so happy to find it again and that it had los nothing over the decades. aa joy to young and old.

I was the happiest of audible customers to find John D MacDonald. I grew into adulthood reading and re-reading Travis McGee novels. Mac Donald can with economy of words create a character that jumps from the page to fully formed being. His characters and stories are timeless yet the sexism entrenched in these books allow a glimpse of the coming of age atmosphere for women in the 60 - 70’s.
A disappointing inheritance springs us into a world of a missing 27 million dollars. The secret of the watch and red time leads the characters to a romp of fun. What is the secret of the watch?

Read this and everything the author has written. You will be pleased and meet characters that still lived in my heart after 50 years. Jump into Florida and the sexual revolution.

I love this author but this book was just so tame and so boring I almost couldn't finish it but for the recommendation by Dean Koontz.

I probably would've loved it in the 70s but a lot has changed since then and I require a faster pace and a lot more excitement.

Fun story, so so narration

What did you love best about The Girl, the Gold Watch & Everything?

The humor was fantastic; so many times I laughed out loud.

The narrator's tone for different characters didn't differ enough for me. Sometimes it was difficult determining which character was speaking due to the lack of difference