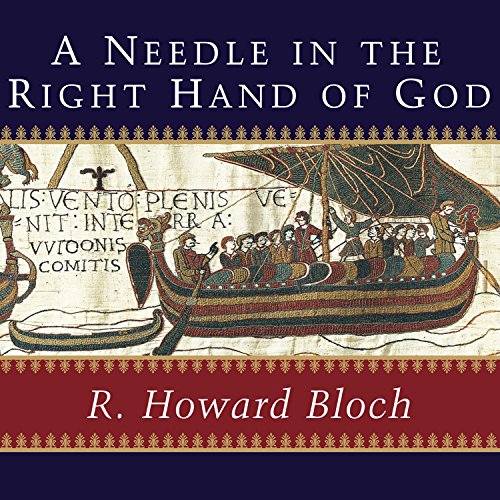 A Needle in the Right Hand of God

The Bayeux Tapestry is the world's most famous textile: an exquisite 230-foot-long embroidered panorama depicting the events surrounding the Norman Conquest of 1066. It is also one of history's most mysterious and compelling works of art. This haunting stitched account of the battle that redrew the map of medieval Europe has inspired dreams of theft, waves of nationalism, visions of limitless power, and esthetic rapture. In his fascinating new audiobook, Yale professor R. Howard Bloch reveals the history, the hidden meaning, the deep beauty, and the enduring allure of this astonishing piece of cloth.

Bloch opens with a gripping account of the event that inspired the Tapestry: the swift, bloody Battle of Hastings, in which the Norman bastard William defeated the Anglo-Saxon king Harold and laid claim to England under his new title, William the Conqueror. But to truly understand the connection between battle and embroidery, one must retrace the web of international intrigue and scandal that climaxed at Hastings. Bloch demonstrates how, with astonishing intimacy and immediacy, the artisans who fashioned this work of textile art brought to life a moment that changed the course of British culture and history.

Every age has cherished the Tapestry for different reasons and read new meaning into its enigmatic words and images. French nationalists in the mid-nineteenth century, fired by the Tapestry¿s evocation of military glory, unearthed the lost French epic "The Song of Roland", which Norman troops sang as they marched to victory in 1066. As the Nazis tightened their grip on Europe, Hitler sent a team to France to study the Tapestry, decode its Nordic elements, and, at the end of the war, with Paris under siege, bring the precious cloth to Berlin.

"With estimable clarity and evident enthusiasm, Bloch delivers variety, surprise, and understanding for history readers." ( Booklist)
"The tapestry, now in a museum in Bayeux, brings history to life, and Bloch's splendid account does the same for the tapestry itself." ( Publishers Weekly)

Half of this book for me was enjoyable. The other half, largely tedious. This dividing line comes when the author moves from the historical/political/cultural and on to the details of the stitching, the cloth and the manual techniques involved. This to some extent is interesting, but within this book for me it went on for too long.

Either way, a good book with many interesting ideas. Would be 4* if it was edited for about 1 hours boredom.

on a positive note the books content regarding the actual making of the tapestry and the materials and skill involved was careful and interesting.
It is the historical content of events where the book falls short... silly mistakes like calling kent the ancestral lands of Harold Godwinson are simply untrue (although at the time of battle Leofwine was earl of kent). Other 'school boy errors' are present in the book and hint at a lack of knowledge of events on the ground.

Hard to get the picture

I have listened to books about art before; but this one, while competently narrated, and while apparently well researched and written, was difficult to follow. Even using various on-line sources for viewing the Bayoux tapestry, I was lost most of the time. At points in the text, there are references to specific images in specific panels, and I found no good way to follow along. The tapestry is 230 feet long (nearly 80 yards!) and viewing it online was simply not very satisfactory. Parts of the story, however, do not really require following the tapestry. The tapestry tells the story of the Battle of Hastings, (1066) where William of Normandy conquered the English King Harold. The book tells what is known of the tapestry; explains some of the artwork; notes that it is the source of much of the written history of the battle. There is also some interesting history of the tapestry itself, such as the fact that the Germans were interested in it during World War II to show that the Germans had a historical right to Britain. Other facts, such as when it was made and by whom are the subject of much debate.

I enjoyed much of the book, and think I would have enjoyed it more had I a decent copy of the tapestry to follow along with.

Recommended for textile historians only

If you're deeply, deeply interested in historic textiles, this is a wonderful, well-written book. I don't believe it will have much appeal to other readers, for example those interested in the details of the Norman invasion or biographical information about the dramatis personae of that era.

To appreciate the subject, you must have a detailed image of the embroidery. There are amazing images, visual puns and puzzles, and so much storytelling in the needlework.

I was lucky enough to have access to an old book with large, multiple fold-out images, and as a more useful alternative, there are many sections which can be viewed online. Without visuals, this book is about as useful as trying to read about Van Gogh without ever seeing one of his paintings.

Note: "The Bayeux Tapestry Embroiderer's Story" by Jan Messent is a hand-written and illustrated book which may also be of interest to the textile-obsessed who wish to delve deeper into the artistic elements and craftsmanship of the embroidery itself.

I would certainly recommend it to someone interested in history. The author brings together a lot of small pieces of history and arceology to paint a very thorough picture of the tapastry and the history behind it.

The piecing together of very small parts of a great puzzle.

The narrator was awfull, indeed. I think other reveiws also pointed that out. It took me a couple of hours' reading to adapt to that diction. It annoyed me.
It sounded like he was reading from a long long list and was terribly tired of having to do so.

Needs to be seen and not just heard

The book was very interesting, but much of it describes the Tapestry. Without being able to see the illustration, it was hard to follow the description. This is a book that needs to be seen and not just heard.

already familiar with the tapestry, i enjoyed the heck out of this audio book! the author covers historical events depicted, as well as background information, technical aspects of the tapestry's construction, controversies regarding the origin of the piece, the importance of the piece as history itself, and the role it has played in international politics into the 20th century. i found it to be a fascinating and enriching journey, and well read. thank you!

It was quite an effort for me to simply finish listening to the entire book. I would say about 30 percent of the book describes the tapestry itself and the rest talks about the history surrounding the tapestry.

The author does have a passion for the tapestry, which is enjoyable. I have no idea why someone thought this book would make a good audio book. It did make interested enough to learn the difference between an embroidery and a tapestry and a few other points in the book.

I did want to learn more about the tapestry and I purchased the book "The Bayeux Tapestry" by David M Wilson. This book has half scale color pictures (10" tall) that show all of the beautiful details of the tapestry including the stitching. It is vastly superior to even the images found on the internet.

I suggest skipping this painful audio book, and purchasing the impressive real book.

The author captures the art of needle work in representing the Battle of Hastings (1066) as the most significant cultural and historic event at the end of the first millennium.
He successfully places this icon in historic and cultural perspective.

The details and information are the best part of this book, from the author standpoint. I sometimes got lost when he would digress to another time frame, and sometimes all that information was just too much to keep track of. The performance was wonderful, though, and I will look for more of his readings.

A focused history of the Bayeux tapestry, in the larger context of French and English history, and national identity. Well-read.