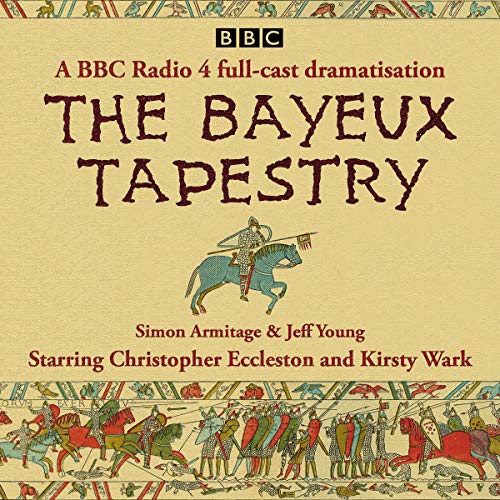 A combination of verse from Simon Armitage and prose from Jeff Young lends a voice to the chain of events depicted on the famous Bayeux Tapestry. This production chronicles the history surrounding the Battle of Hastings in 1066 and the ascension of Duke William of Normandy to the English throne.

Harold, Duke of Wessex, takes the English throne, despite Edward the Confessor's wish that William Duke of Normandy should be his heir. Seeking retribution, William sails to England and heads his troops towards Hastings, where the battle eventually concludes with Harold's death by an arrow shot to the eye. Poetry and prose are interspersed with war correspondent-style reports on the action. As the royal dukes ponder their lot, assorted commoners of the day discuss fear, heroism and grief.

What listeners say about The Bayeux Tapestry

Who on earth approved Kirsty Wark for the job of narrating this audiobook? She absolutely destroyed this excellent play for me. Kirsty is cold, has no clarity with no idea of how to voice project. Her way of speaking is irritating. Such a shame for this is an excellent account with great acting from all. This is Kirsty Warks first audiobook, I hope this will be her last.

This drama balances the stories of ordinary with the story we usually know This is something I will listen to again.

1066 - every schoolchild knows the basics, but history is given a contemporary spin here in this short but detailed biography of the persons and circumstances leading up to the Battle of Hastings and the change in fate of Britain.

Using the Bayeux Tapestry as its synopsis, poet Simon Armitage brings us verses about the kings, lords and commoners involved in the documented battle. The personal perspective of the characters is quite fresh-feeling as we learn of their emotions and lives, knowing the outcome of the story.

The most startling aspect of the audio, however, comes when the familiar voice of Kirsty Wark brings us news updates from the period, from the scenes of battles, giving us a journalistic perspective that these events have never seen before. The idea of this voice and style describing the events in this way was quite gripping, brought the action of the past into the present.

Some famous voices are in the cast, the poetry was at times very beautiful and stark. It all made the production very professional, smooth and curious.

Anybody with an interest in medieval history might want to consider listening to this novel approach to reporting and recording history for a contemporary audience.

I really loved this, it gave me an atmospheric afternoon. Will definitely listen to it again.

Impressively done but hard to keep track of who’s speaking

The format of this story is presented here and there from a very modern approach as a newscaster narrates the power struggle between King Harold and King William the Conqueror in the events of the Bayeux Tapestry surrounding the battle of Hastings in 1066. It did jar the immersive side a bit for the modern approach but I eventually came to appreciate the outside perspective to establish the settings of each piece. Each chapter except the last is placed in 15 minute slots while the last is one whole hour to cover the battle that decided the fate and identity of Medieval England. The acting is impressive and the musical pieces add a haunting poignant detail to the grim, gritty and unrelenting aspects of medieval warfare waged by two kings who want it all. The perspective shifts from homesick bloodthirsty soldiers to terrified peasant bystanders caught up in the fray, but without a consistent narrator to name the characters who are involved, it is hard to tell who’s who in this historical production. Occasionally, the voices of nobles and the kings themselves are heard as they share their take and thoughts, and while the script and acting is very convincing and to be expected of their greedy, vainglorious and ambitious personalities, it took a while for me to identify who was who or how to tell them apart without distinguished accents. The french Normans were played by very English actors just as Harold’s men were, which only added to the confusion in identifying who was speaking.
This was an impressive audiobook that did not shy away from the horrific aspects of medieval warfare and the mindsets of all involved. No innocent is spared and Jeff Young and Simon Armitage, who wrote the Last Days of Troy and the Odyssey, two adaptations of longstanding classical stories that can also be found here on Audible, combine their adaptational skills with the voice acting talents of the cast to present a very convincing and gritty recreation of the events depicted in the Bayeux Tapestry. The lack of a more concise narrator instead of the day to day and minute by minute reportings of the newscaster prevents this from becoming an outstanding audio production. Instead, I would call it impressive and bolstered well by its tone appropriate script and authentic action and music.