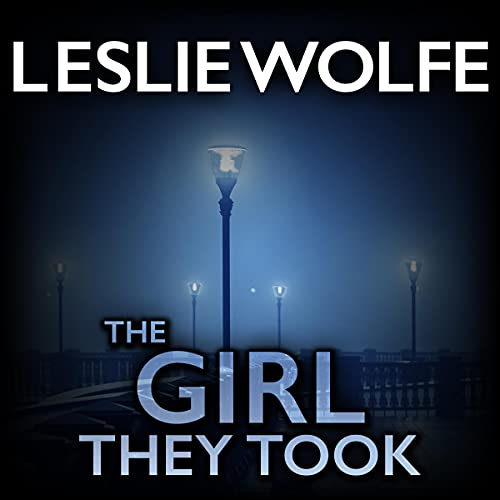 The Girl They Took

By: Leslie Wolfe
Narrated by: Gwendolyn Druyor
Try for £0.00

Where her daughter had played Gretel in front of a cheering audience, only two faint stage lights remained. The theater was deserted and eerily silent; the only sound she could hear was her own heart, pounding in a frenzy against her chest. She rushed outside and stopped sharply at the top of the stairs, stunned, her blood turned to icicles. Darkness had fallen, thick and filled with ocean mist, lampposts like ghosts sprinkling yellow haloes in the sky. Paige was gone. They’d taken her little girl.

After eight-year-old Paige disappears without a trace, FBI Special Agent Tess Winnett is called to investigate one of the boldest kidnappings the bureau has seen. The girl was taken from a theater filled with witnesses, in the middle of a children’s play. And no one saw anything.

Starting a frenzied search and following leads that seem to suggest a link to the girl’s father, the state district attorney, Tess is stunned to learn of a ransom call that points to an entirely different motive, old as time itself: money.

Frantic for answers and painfully aware of each passing moment, Tess has a choice to make: trust her instinct and follow the leads that seem to indicate an organized crime connection? Or give in to the demands of the parents and assist with the ransom payment? The odds of finding Paige alive drop with every passing second, and making the wrong choice would seal her fate. Her blood would be on her hands.

What listeners say about The Girl They Took

The Girl They Took

This suspense thriller is definitely a ride with twists and turns and an ending you won’t see coming. It was hard to put this one down and it was definitely an easy listen. The author doesn’t run you around in circles, beautifully written. The narration was nice easy to listen to and definitely brought this story to life.

Pay what ever you can to get this great book

Oh wow, I enjoyed the book and just had to add it to my audio book collection because the queen of suspense is back with another gripping instalment in the Tees Winett, series. So glad I did because I enjoyed it even more, even though I knew the out come. Leslie is a very talented author that has the reader hooked from the very first page and this book was no exception, I also had no clue how the story was going to end. The tension built up nicely with every word. The story is told by multiple characters from Tess as she tries to find the kidnapped child, to the kidnappers as they try to work out how to retrieve there ransom money and from the grief stricken parents as they try to comply with the kidnappers demands and terms, all make for some great characters and an nail biting investigation.
Tess is used to being called reckless and a lose cannon, so she is surprised when she is the lone FBI agent called in to investigate a child abduction case, especially as her background is in serial killer cases. The child's father is the reason she is called in, as she has faced him many times across a court room. Now he needs her reckless behaviour to help find his missing daughter. The kidnapping was well planned but something about it is off and just what is the state district attorney not telling her? Can she meet the kidnappers demands and get his daughter back or is something else going on and will she and computer special analyst Donovan be able to uncover it in time? And before any body gets hurt?
I love the narrator and am glad she is the narrator for this series, what a great team the author and narrator make. She puts so much emotion into an all ready emotionally charged book that you experience the book rather than listen to it.
I was given this free review copy book at my request and have voluntarily left this review

I didn’t finish the book. I could not take another word of the narrator and the book wasn’t that interesting anyway.

Good procedure material but did not like the voice of the mother. easy to follow story line.

I found this story to be very interesting and I had to listen straight through. I just had to find out what was going to happen to Paige, her parents and stepfather and even the people on the wrong side of the law! It kept me guessing how the author was going to have the criminals be able to get what they wanted. I would love to read a follow up to this book because it ended on such a twist you won't believe and I want to read more about Special Agent Tess Wynette cases!
I received a free code from Audiobooks Unleashed to listen to this book on Audible. This review is my own honest opinion.

the girl they took

loved this book! keeps you on the edge of your seat. Twists and turns till the end!


I have read/listened to all the previous Tess Winnett books and The Girl They Took is without a doubt the best yet. This story takes Tess in a different direction from serial killer cases she has worked in the past, however, while the direction is different, Tess is her same old no-holds-barred elf when it comes to pursuing the perp(s) and trying to resolve the case. Not only is the action on-stop in this story, but there are also several competing interests that will keep you wondering whose interests will be served.

One note of caution, if you grab a copy and settle in to read/listen to this book, maybe don’t start if it is after 8:00pm, unless you don’t mind having a very late night. Putting this book down is next to impossible given the way the characters and the story grab you. Once again Gwendolyn Druyor’s narration brings not only the story to life but brings each character to life as well.

Loved It great plot. great narration by Druyor Love the authors book and the narration added to this story .
Given audio for my voluntary review

Love the Tess Winnett series and this one was just as spectacular. Artfully read by Gwendolyn Druyor. Big fan of Leslie Wolfe!