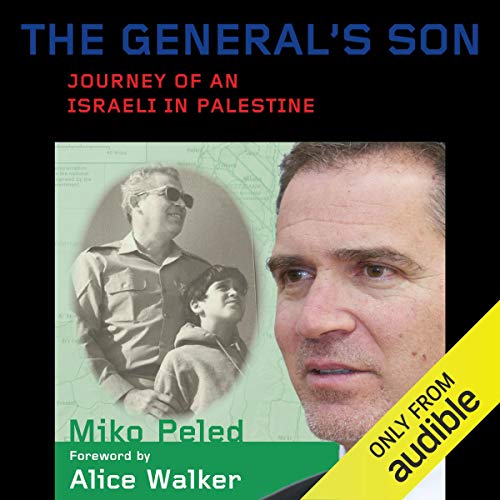 In 1997, a tragedy struck the family of Israeli-American Miko Peled: His beloved niece Smadar was killed by a suicide bomber in Jerusalem. That tragedy propelled Peled onto a journey of discovery. It pushed him to re-examine many of the beliefs he had grown up with, as the son and grandson of leading figures in Israel's political-military elite, and transformed him into a courageous and visionary activist in the struggle for human rights and a hopeful, lasting peace between Israelis and Palestinians.

The journey that Peled traces in this groundbreaking memoir echoed the trajectory taken 40 years earlier by his father, renowned Israeli general Matti Peled. In The General's Son, Miko Peled tells us about growing up in Jerusalem in the heart of the group that ruled the then-young country, Israel. He takes us with him through his service in the country's military and his subsequent global travels...and then, after his niece's killing, back into the heart of Israel's conflict with the Palestinians. The book provides a compelling and intimate window into the fears that haunt both peoples - but also into the real courage of all those who, like Miko Peled, have been pursuing a steadfast grassroots struggle for equality for all the residents of the Holy Land.

What listeners say about The General's Son

A breath of fresh air

A wonderful opportunity to hear about the Israel/Palestine conflict from an Israeli Jew, who believes in the absolute rights of the Palestinians whilst also loving his country, but not its policies. It is an emotional journey, from a man whose father was a very respected General in the Israeli army, and held similar views. Much respect to both father and son.

I found this very informative of the tensions in the country that we call Israel and of the efforts of those of different backgroubds and cultures doing their all for peace.

Great book with excellent narration. Be warned, some parts are not easy to listen to.

I think this book is incredibly moving and brutally honest. I have a huge amount of respect for Miko and his family. It is far easier to go with the flow and support your countries actions rather than to stand up and oppose acts of oppression. I loved this book.

Peled will make you think deeply about the Israel-Palestine conflict. I would recommend this to anyone interested in the issues. There are moments where I did not always agree with the author, but that makes for good reading. He tends to gloss over some details that bear fleshing out. For example, he spends a lot of energy on explaining Egypt's military presence in the Sinai Peninsula as provocation of the Six Day War, but glosses over Syria and Jordan's subsequent attacks which led to occupation of the Golan Heights and the West Bank. For those unfamiliar with the details of the events, a little more explanation would have been helpful. Overall, the book is thought-provoking and powerful. Peled's personal story is honest, fascinating, and full of heart. The performance is good, but there are some editing issues and some mispronunciations. Otherwise, I enjoyed hearing the story in the author's voice.

Thank you for sharing your stories and insights. As a peace activist who frequented Palestine and recently been denied entry by the Israelis without justification, everything you mentioned resonated. I look forward to meeting you in LA or SD.

Miko peled is an inspiration

you must listen to the whole thing, fantastic story everyone should read to better understand a complex issue

Incredible story if one has any desire to understand the truth about Palestine. Loved every minute of it and wished it could have continued.

Every single American needs to read this book, or in this case, listen to it. We need to stop giving Israel money. Our tax dollars are funding these atrocities.

An eye opener, heart wrenching and a must read for anyone who is interested in ending injustices anywhere in the world


Why has one of the key military figures who made Israeli history, General Matti Peled, decided - after the 1967 war - to devote the rest of his life advocating for the Palestinian people's human rights and civil rights, and their right to self-determination as an autonomous nation? The answers are revealed by his son, Miko, with clarity and details, some of which are shocking.

To me, this book presents a reliable and informed narrative about the controversial "creation" of modern Israel, why it is more akin to a colonial enterprise modeled on anachronistic European colonial powers, where the Indigenous population is vilified and crushed by a military occupation, with crimes against humanity, amid the world obscene silence.

Miko Peled introduces us to the maddening ambiguity of a conflict which explores the question - is modern Israel the only democracy in the Middle-East?

The truth is a bitter pill to swallow, but the contents that emerge from a clear conscious are sweet and delectable.

It is so important for everyone to read this book.
Miko Peled is my new hero.

Great point of view from Israeli about the future

Listen to the opinion of an Israeli about the future of Israeli and Palestinian. It could be the only way