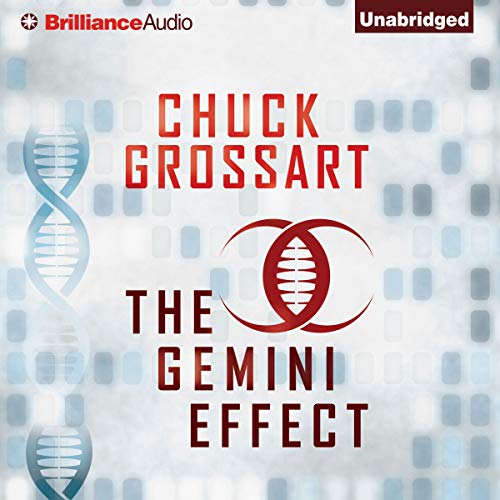 By: Chuck Grossart
Narrated by: Phil Gigante
Try for £0.00

A single raindrop opens a Pandora's box of horrors when the spawn of perverse genetic research performed during World War II - refined by Cold War enemies and perfected by nature - are unleashed on an unsuspecting world. By dawn only a dead city remains, eerily quiet and still except for the mutant beasts who hide from the light, multiply, and await the shadows of day's end.

Ordered to investigate the unfolding crisis, biowarfare specialist Carolyn Ridenour barely escapes the creatures' nocturnal onslaught, saved in the nick of time by Colonel Garrett Hoffmann, who has lost hundreds of his troops to the mutant army that neither bombs nor bullets can break.

As Carolyn and Garrett race to stop the plague, a battered and broken US government is preparing to release the fury of America's nuclear arsenal on its own soil.

What listeners say about The Gemini Effect

My words have failed me. It's like this story takes every pop science and Cold War plot and just mixes it all together. Anyone one of these plots would make a fine story by its self, all together...

Well my suspension of disbelief died in the first chapter. The level of coincidence needed to make this all happen, it's utter fiction. But it's fiction that dances around in clown shoes. It's a direct to DVD movie with serious actors reading a ham fisted script.

10 out of 10 napkins needed to stop the groaning I produced for this story. The barista at my local Starbucks now looks at me funny.

Really enjoyed the urgency that was apparent throughout. Great multiple viewpoints from key characters gave me a rounded story as the situation(s) unfolded.

Really impressed with the narrator's different voices. Only downside was Carolyn, her attempt with constant smart ar$e quips wore a little thin.

But the rest of the characters I really enjoyed.

The detail in gore was good and satiated the horror geek in me.

light read not much on details. may get the next one if im board. not worth full price though

What made the experience of listening to The Gemini Effect the most enjoyable?

Yes. The Russian sleepers were a bit far fetched but overall a good story that keep me listening

The different characters all made good contributions to the story

Which character – as performed by Phil Gigante – was your favourite?

Not sure they were all good

An interesting and different novel

A well paced and unusual plot line, part political thriller, part dystopian with a chunk of biological warfare.
The narrator did a perfect job and enhanced the story with good character definition.
I hope there is a second part coming soon!

I was very surprised. I liked this book a lot. the narrator had a good variety of voices, very believable too, even for females voices. the story was great, loved it - sometimes a bit over the top, but highly entertaining.

bad b budget book.. In a bad way

I had to force myself to finish this book. The characters have no depth. I wasn't sure if it was the book itself or narration where at points every character sounded like a version of John Wayne.. But after a bit realized it was poor writing and poor narration. The ending came as if the author was rushing to finish this book. Would have been somewhat better if I cared about the characters. Instead I didn't care if any or all of them died. Like a bad b budget movie but written not acted.

Narrator does a decent job with what he has to work with, but what starts out as a sci-fi special ends in an apocalyptic graveyard. The best part of the book is the insidious antagonist Jesse, but even she falls short of making the novel memorable. Sorry, Chuck. There's just not enough substance to make this novel worth the purchase price. A good first effort, however.

Much agree with the majority of viewers. This started off well but falls apart pretty quickly. Too bad.

not based on any facts. too fake for me. too left wing and hard to get in to.

Not worth the listen. Kept waiting for it to get better. But it just got worse. Don't waste the time and money on it.
The creatures were ok but then to add the stupidity of the president and
so called control didn't make sense. Was hard to even stomach the last few chapters.

I can't wait for more from Chuck Grossart! What a great way to start! He's writing ranks up there with King, Kilborn, Sigler and Crouch! Keep up the great work!!!!

What did you love best about The Gemini Effect?

It's an entirely new spin on the apocalypse genre, which I enjoy.

Carolyn, because she is smart and brave.

He has a very pleasing voice, and easily differentiates between characters.

Yes, I wish I had the time to listen all in one sitting.

I am glad that the events portrayed in this story are fiction. It's an absolutely terrifying scenario!

WISHING WAS NOTHING MORE THAN AN EXCUSE

FOR POOR PLANNING
This hits the ground running and keeps running and keeps running. No time for character development and no time for a plot. The writer shows his ability to read a map and that is it. It is a shame, cause it could have been good. A Nazi experiment gone wrong leading to zombie rats, dogs, humans, you name it. I love books with references to Nazi, Russians, military weapons, and mutated rats, but I guess I need a little more, like an actual story.

Narrator has one female voice, used for all females and not much difference in his man voices.