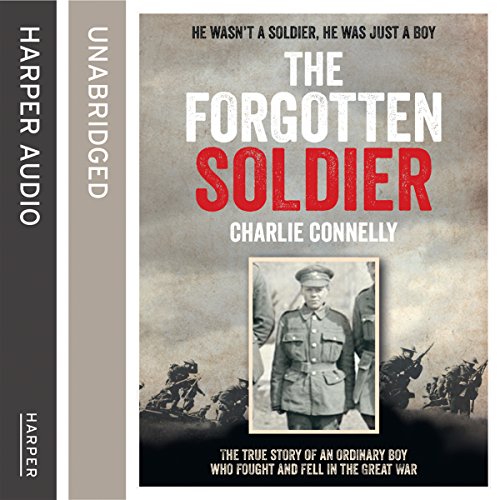 By: Charlie Connelly
Narrated by: Adrian Palmer
Try for £0.00

Best-selling author Charlie Connelly returns with a First World War memoir of his great uncle, Edward Connelly, who was an ordinary boy sent to fight in a war the likes of which the world had never seen. But this is not just his story; it is the story of all the young forgotten soldiers who fought and bravely died for their country.

The Forgotten Soldier tells the story of Private Edward Connelly, aged 19, killed in the First World War a week before the Armistice and immediately forgotten, even, it seems, by his own family.

Edward died on exactly the same day, and as part of the same military offensive, as Wilfred Owen. They died only a few miles apart and yet there cannot be a bigger contrast between their legacies.

Edward had been born into poverty in west London on the eve of the 20th century, had a job washing railway carriages, was conscripted into the army at the age of 18, and sent to the Western Front from where he would never return. He lies buried miles from home in a small military cemetery on the outskirts of an obscure town close to the French border in western Belgium. No-one has ever visited him.

Like thousands of other young boys, Edward's life and death were forgotten. By delving into and uncovering letters, poems and war diaries to reconstruct his great uncle's brief life and needless death; Charlie fills in the blanks of Edward's life with the experiences of similar young men giving a voice to the voiceless.

Edward Connelly's tragic story comes to represent all the young men who went off to the Great War and never came home. This is a book about the unsung heroes, the ordinary men who did their duty with utmost courage, and who deserve to be remembered.

What listeners say about The Forgotten Soldier

Best book I've had this year

Where does The Forgotten Soldier rank among all the audiobooks you’ve listened to so far?

Top five. It is a really great read and I kept trying to find time to listen to it.

the combination of first hand accounts and the authors own journey. I know a fair bit about the first world war and this area of Belgium but I learnt so much from the book.

Have you listened to any of Adrian Palmer’s other performances? How does this one compare?

First time I've had him as a reader and I liked it.

The ending. I won't go into as I don't want to ruin it! Just brilliant.

Buy this book! It is so well written and so easy to relate to. Purchasing a printed copy for my mum and for me as well I liked it so much.

The narration initially irritated me with long pauses but I got over it. As the book will tell you, the story of one person but relates to so many of these poor lads that unfortunately are forgotten now. I really enjoyed the way the tale unfolds and concludes and I will certainly listen to this book again

First of all the narrator was very impressive he was well spoken from start to finish. The story was very educational, it is always interesting to hear another soldier's experiences of the great war. Everyone had their own story to tell on returning home. And this small part of history was very educational and sad at the same time. God bless the fallen, you'll never be forgotten.

I came across this title quite by chance, I am so glad I did. A moving account of the ordinary soldier of the Great War. Like the narrative says most people would have had similar in their family history, hopefully not forgotten. Excellently narrated. Listen and be moved by stories of a long departed veterans. Remember them.

Really enjoyed the book, lots of diary entries that gave you huge insight into what the soldiers went through.
Kept me hooked to discover what the author could/would find out about his great uncle. Inspired me to delve into my great grandfathers military history and follow his footsteps across the battlefields of the western front.

A fantastic journey of one man's discovery journey of his great uncle. particularly apt for the Remembrance season.

This was a very good audiobook and the narrator was perfectly chosen for it. I have a great uncle who was killed at Vimy Ridge - his body was never found - not unlike the principal character in this book, and my grandfather lost his arm at the Lens in 1917. I've long been very interested in the First World War and I made my own visit to the battlefields of the First World War in May 2009, likely a similar time of year when the author made his trip.

The author recounts in a very similar to one that has gone through mine many times, albeit mine would be from a Canadian perspective. I don't nit pick on historical accuracy but generally I think he was right on the mark. This is about a personal sojourn, and piecing together the story of a young soldier's experiences through diaries and letters of those who also served at the front, for those of us 90+ years in the future.

At times it was very emotional - like his visit to Ypres and the Menin Gate - because it so closely mirrored my own; and at other times it was interesting, absorbing you in a story that is not new to you, but still fascinating.

So much has been written about the First World War, and so little is new. This isn't new - there are many similar accounts out there. But it is brilliantly told, wonderfully narrated and a very enjoyable and moving listen.