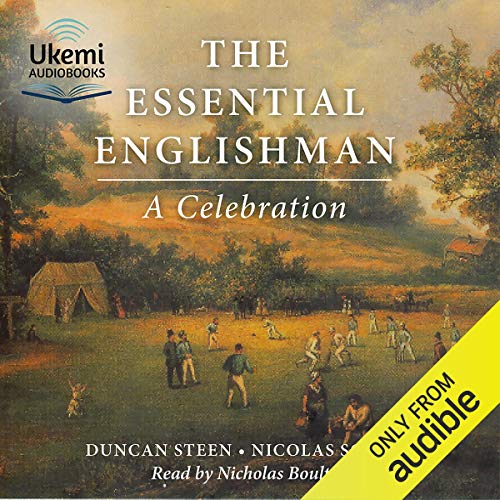 By: Duncan Steen,Nicolas Soames
Narrated by: Nicholas Boulton
Try for £0.00

There is no watertight excuse for this book. It strolls impertinently over ground that has been carefully mapped by the qualified authorities and elegantly appreciated by many devoted amateurs. Its purview is ludicrously broad - nothing less than an exhibition of the Englishman in his more characteristic manifestations through the ages.

It is, wriggle out of it as we would, a hopelessly, damnably patriotic book. However, it is our opinion that the evils of nationalism, cultural hostility, race hatred and fear of social change are best countered by an open regard for the values of one's own society and a cheerful celebration of its virtues - and, on this basis, an honest recognition of its failures and weaknesses.

The Essential Englishman is a fascinating portrait that seeks to define at least some of the Englishman's attitudes, to celebrate his successes, admire his strengths, to glance with understanding at his weaknesses and also to reflect the way that others see him. Recent dramatic political changes make it even more timely for the millennial Englishman to be able to gain, through looking back at history, a quirky if affectionate view at who and what he is.

The picture that emerges is rich in contradictions. The archetypal Englishman, it seems, adores animals yet has a passion for fox hunting; he has founded empires but has an inherent mistrust for anything foreign; he is suspicious of government yet trusts his (unwritten) Constitution implicitly. And while the English possess a profound scepticism about the value of creative endeavour, England has consistently given the world some of its greatest poets, writers, musicians and artists.

Authors Duncan Steen and Nicolas Soames have called evidence for the defence (and occasionally for the prosecution) from more than a thousand years of English literature, history and historical anecdote while witnesses range from Shakespeare to Bernard Shaw, from Dr Johnson to D. H. Lawrence - and a range of foreigners who are bemused yet often view their subjects with a whimsical goodwill.

By turns hilarious, sad, heroic, eccentric, maddening and oddly inspiring, here is the true Englishman - at school, in love, in battle, at prayer, at sport, abroad, or at home in the country. This entertaining and informative book is essential listening for everyone in or out of England, and especially as it forges a new identity within the geographic (if not political) environs of Europe.

What listeners say about The Essential Englishman


This celebration of what has characterised an Englishman over the centuries is unique. The book was first published in 1989 and the fact that it doesn’t pretend to be an academic investigation gives it a straight-forward, slightly retro and charming air. What needs to be remembered (and is quite difficult to remember this in 2017) is that 1989 was pre-Internet. Today someone planning such a book would probably find the quotations online and just cobble them together. When The Essential Englishman was published, Duncan Steen had had a career as an antiquarian bookseller and the vast range of references come from the authors’ heads and hearts, which makes for a rich listening experience.

The authors clearly enjoyed the venture and their exuberance is infectious, matched by Nicholas Boulton’s performance with his wealth of intonation and voices from Churchill to a yearning Betjeman, a busy Boswell, the Northumberland voice of Bewick, or a serious Milton and a host of bluff politicians and aristocrats. The whole is an elegantly written account, or more accurately a fast-paced romp, through the centuries with a staggering wealth of anecdote and quotation from a vast range of clearly but unobtrusively identified sources from novelists, poets, diarists, politicians, reformers, philosophers, travellers, colonialists and men of religion. Arranged in chapters - Englishmen at school, in love, in church, at sport etc – the text and extracts can be amusingly partisan or even caricature, but nevertheless they open hundreds of little windows onto past mores and ways of thinking and behaving.

They made me smile a lot – and I really liked that cricket was invented to give the Englishman an idea of Eternity!