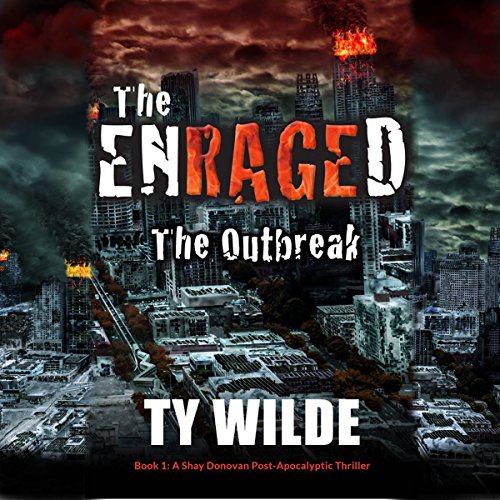 The Enraged: The Outbreak

The Enraged: The Outbreak

What would you do if your world was suddenly thrown into chaos? Surrounded by death and destruction, would you be able to adapt and survive?

This thrilling new novel tells the story of a soccer mom turned soldier. Shay Donovan is separated from her family during an outbreak where millions of infected humans become enraged, destroying in their path and killing anyone they see. Shay finds herself in a brutal fight for her life in a desperate attempt to find her husband and two young daughters.

This novel, is much different than other zombie stories. Shay is an average American house wife, finds herself alone during an outbreak where those who are infected become enraged. Different from the zombies in The Walking Dead, these zombies can run, jump and climb. Shay is saved from certain death by a stranger and joins a group of survivors, L.A. to the mountains where they think they'll be safe.

But, they can't run and they can't hide as hordes of flesh-eaters hunt down the remaining survivors. Petrified of guns and violence, Shay is forced to step out of her comfort zone as she desperately searches for her family realizing that if she doesn't kill the zombies, the zombies will kill her. Shay finds herself in a world of kill or be killed and if she's going to survive, she must become a killer.

The novel also tells the story of Shay's husband, JT, a normal guy, and his friend Porter who is a Navy SEAL, as they attempt to escape the zombies with three little girls. Because these zombies can run, the men are forced to fight the flesh eaters as they seek to find refuge before winter sets in. The zombies aren't the only enemy, as other humans and Mother Nature herself make several attempts at their lives as the world literally crumbles around them.

I do love a good zombie story and I did really quite enjoy this one. The characters were well written and the plot moved along at a good pace.

I also think the narrators did a good job with both the production and voices.
Well worth a listen.

Did not reach its potential.

Would you be willing to try another book from Ty Wilde? Why or why not?

Yes the author has talent......... you can not have a success with every effort.

Do you think The Enraged: The Outbreak needs a follow-up book? Why or why not?

If you could sum up The Enraged: The Outbreak in three words, what would they be?

What was one of the most memorable moments of The Enraged: The Outbreak?

When Shay's sister's corpse turns into a zombie while she's driving down the road and attacks her, forcing her to throw her from the car where she's then driven over and left in the middle of the road.

I enjoyed Shay's continued commitment to her faith, turning to God in prayer in the middle of the crisis. Although the world was turning into zombie-land, an unbelievable and over-the-top situation, this was beautiful and added a nice touch of realism to the character, making her easily relatable.

Can't wait for the next book to come out will definitely want to hear the rest of the story. This book was given to me for free at my request and I provided this voluntary review.

I have a lot of zombie apocalypse books (a lot I love Z A books ) but I swear Shay and her husband JT and dumbest two people I have ever read about. Her attitude about guns and killing people have no fit for the zombie apocalypse unbelievable she let her sister be killed because she couldn’t pick up a gun. I should’ve, stopped reading then and her husband’s best friend is a Special Forces you think he would’ve learned something from him. This definitely was one of the worst zombie apocalypse stories I have read and I have no interest in reading the next book.... Sorry :-(

I wasn't a big fan of zombie type books, but they are growing on me. Great details and I love the MC. Was a little rocky for her at the beginning, but she is a woman on a mission.

This was my first audiobook by these narrators, and I think they did fairly well with pacing and the characters. This is a duet narration.

I'd be happy to hear what happens in the next book.

You'll be disappointed the zombies didn't eat her

Its not that she's evil, it's just that she's really really annoying. this author has a great deal of trouble of developing characters and leaves the reader ambivalent. Save your money.
Dr A

Fresh new take with great characters. Action packed and fast paced on the edge of your seat action.

A good,gruesome end of the world type book.A man made plague is let loose.People starts to attack and kill other people.No one is safe.I liked it.Richard Rieman and Madeline Mrozek were fine narrators.I was given this book by the narrator,author or publisher free for an honest review

I felt this book had potential but just didn’t quite make it. The characters were difficult to relate to and didn’t have realistic reactions imo. Pretty much the only reason I finished the book is Richard Rieman is an excellent narrator and I really love his work. Overall I was underwhelmed.

As a huge post apocalyptic reader, this book was a great read. Yet the old story of men taking advantage of women, blah blah, some man being the hero seems like pages from yet another series....

So, I am really torn with how I feel about this book. I liked the concept for the zombies. They aren't the slow Walking Dead type. They are more the 28 Days Later zombies that move fast and are ferocious. To me, that is MUCH scarier than the slow shambling ones. That being said, the main character, Shay, is frustrating as hell. Sometimes she seems capable and strong, but other times she seems clueless and afraid. I struggled with how the author handled her character. The narration was very well done, which helped pull me through the story in spite of my frustrations with Shay's character. All in all, I did still enjoy the book, so I would be open to more should this become a series.