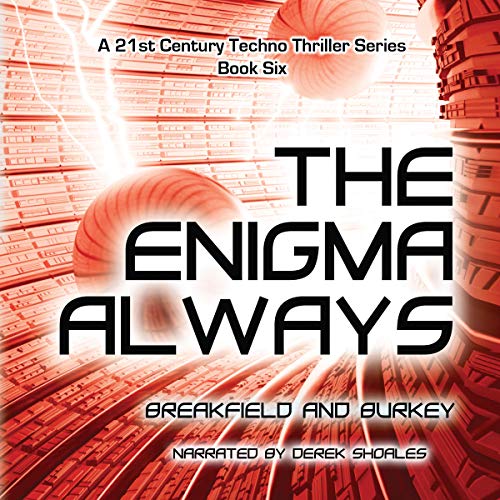 Dr. Xavier Pekoni, a rich evil scientist, is working on his underground Fountain of Youth project. Using nanotechnology and DNA mapping, he is desperately close to extending life 10-fold, which has driven him to extreme research methods.

The R-Group is called in by government agencies to locate Pekoni, verify his unethical practices, and stop him at all costs.

Jacob distancing himself from the R-Group due to personal demons, becomes unwittingly entangled with Zara, the villainous femme fatale leader of the Dteam.
Will he provide the missing coding sequences for the Dteam to capture personal data from health records all over the world?

EZ and Quip, supported by the CATS team are thrust into the forefront of the cyber battle. The feisty redhead, EZ, leads the team along with ICABOD against an evil force seeking to harness his supercomputer technology to further drive Pekoni’s agenda.

Will the diminished resources of the R-Group fail to penetrate Pekoni’s laboratory and shut it down? What will happen to the team if that occurs?

Award-winning authors of The Enigma Series, Breakfield and Burkey, take listeners on an accelerated adventure with old and new characters to tell the tale of human DNA changes gone wrong in Book Six, The Enigma Always.

What listeners say about The Enigma Always

Delivers a action filled romp of a story!

The Enigma Chronicles is an exciting, action packed, fun series of novels that follows the adventures-and misadventures of the noble, capable and very human R team. The award winning authors, Charles V Breakfield and Roxanne E Burkey bring a continuation to the saga of favorite heroes and all new conflict with the 6th book in the series "The Enigma Always." The authors waste no time setting up a complex tale of stolen diamonds, cloning, computer hacking, betrayal and deceit. Using snappy, if not predictive dialogue, the drama sets off at a brisk pace and picks up where the major characters left off. With sharp style and interconnecting story-lines, Breakfield and Burkey bring the R team up against Dr. Xavier Pekoni; a deeply passionate, yet unscrupulous genius whose goal of making human a reality supersedes all moral boundaries. That is just the tip of the proverbial iceberg. The deeply disturbed doctor has so much more chaos coming our heroes way! Dealing with demons of the past and coping with personal problems leave our brave members of the R team scattered and fractured and questioning their abilities to defeat the deeply villainous Dr. Pekoni. The quandary of human cloning is hardly a new concept, yet The Enigma Always still manages to deliver an intriguing and compelling take with an informative approach. The twists and turns of this story mesh nicely with the human element of the books strong and interesting characters. Buzz, Petra, Mercedes, Julie and Quip are characters one would expect to find on an action movie or show. For sure, the people are fairly defined in their roles and don't break out of the box too much. The good guys are very good and charming, the bad guys are devious and ruthless, the sex is always good, etc., but the unfolding of the plot is well thought out and streamlined. The Enigma Always brings about an action filled ride that hooks the reader until the end and looking forward to what happens next to Jacob, EZ and the other members of the heroic R team.

The sixth book in the series and sixth time being kept wrapped in the adventure. Is a fountain of you actually possible and probable. Commander Po is connecting the possibilities when suddenly the project takes a terrible twist. The heroes and villains are on the trail and once again the R-group is on the race to ensuring balance. Great Narration once agin by Derek of great Breakfield & Burkey story. Sometimes I wonder what’s it like inside all their heads, then I say, No not going there my own is crazy enough haha

4.5 Stars. There are 5 books before this one, and I hadn't read or listened to any of the prior 5. I was able to enjoy this story without hearing the others; however, it probably would have been smarter to have listened to the earlier books. Nevertheless, the author did a wonderful job of filling in the back story from the prior books, without overloading the new reader with unnecessary details. This story captures the attention of the listener. There is suspense, intrigue, villainous behavior, redemption, romance, and characters that are very intelligent and likeable. Most of the accents sounded very authentic, but the Australian accent needed some work. Other than that, the recording quality was excellent. The narrator does a wonderful job of keeping the characters distinguishable and interesting. All in all, it was a wonderful listen!

The R-Group faces their most complicated job yet. They must locate a Dr. Pekoni whose work focuses on expanding the life of humans via their DNA. His unethical use of a supercomputer and ultimate goals force the R-Group to step in and wage cyberwar against Pekoni. Petra and Jacob are still coming to terms with their previous mission and subsequent separation. The bonds of friendship, love, and family are even stronger in this novel forcing some to step out of their comfort level to face their fears and defeat the evil doers. There are several storylines going at the same time yet they all intertwine in a meticulously and deviously planned way. Charles Breakfield and Roxanne Burkey continue their riveting Enigma series with this latest novel. As usual, they have their listeners on the edge of their seats as they await each outcome. Breakfield and Burkey methodically take the listener through every emotion while also challenging the listener to consider the ethical questions these books bring to light without having to ask them … in this book, is a fountain of youth that allows humans up to 1,000 years of life ethical, problematic, how would it affect the world overall and what other sort of problems would this promote? Breakfield and Burkey continue to develop their characters putting them through some problems normal people go through – such as self-doubt, misunderstandings, love, fear and more while also struggling to do their job. Derek Shoales as the narrator of this series is awesome! I love listening to him, he moves the story along with his interpretation of what he thinks each character sounds like as well as injecting the appropriate emotions into the story. To me, these three people have made the Enigma Series number 1 in my mind! I can say without a doubt, this is a series that has it all … intrigue, mystery, romance, and danger! There were no issues with the quality or production of this audiobook. Everything was clear and paced appropriately. Audiobook was provided for review by the author/narrator/publisher. Please find this complete review and many others at my review blog. [If this review helped, please press YES. Thanks!]

So. For now, I'm skipping my review of book five and moving right to book six. Seriously, book five really messed with my head, so I can't stop to contemplate my review. However, in this story, so MUCH happens! Some relationships get sort of repaired, some former enemies become true allies, and their alliances with former bad sorts were explained and the reasons were celebrated. I think my favorite character in this story was Buzz, especially since I've truly despised him in previous stories. He is such a real person in this story, he's hard not to like. Thankfully, he has Jacob's back, as it were. This quest has been my favorite so far. There is just so much going on! Loved every second!