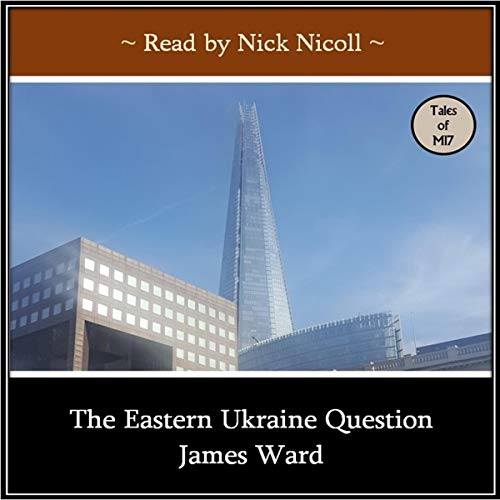 A cabal of Russian oligarchs instigates unrest in the Far East of Russia as the first stage of an attempt to unseat Vladimir Putin. Britain offers covert support in the form of five MI7 agents. The disturbances mirror those in Eastern Ukraine and, if pushed far enough, might persuade the Kremlin to retract its territorial interests in Donetsk, Luhansk, and Zaporizhia.

However, once the five operatives are shipped east, events take an unexpected turn. One by one, they begin to disappear.

Enter Grey Department’s John Mordred, by grudging consensus, MI7’s best agent. Young, idiosyncratic, and a linguistic genius, Mordred prefers diplomacy to battle, doing the right thing to defending the realm. Yet he won’t necessarily duck a confrontation. Especially when the lives of his coagents are at stake. Which - given the job description - they usually are....

The Eastern Ukraine Question was authored in 2014, at the same time as the events that form its backdrop.

What listeners say about The Eastern Ukraine Question

What an odd and, to me, unsatisfactory book. I have to assume it is meant to be a spoof spy novel. If I am right, it is simply not funny enough and John Mordred not interesting enough. There is an attempt to make him quirky but he just comes across as a fish out of water and an innocent abroad in the world. He is ineffectual, prone to falling in love with every woman he sees and buffeted about by the events surrounding him. He Is supposedly much valued by his spy masters but it is impossible to see why on this showing, apart from his facility for languages. Perhaps that is a sign that this is a spoof, an extended dig at the expense of the spy world? It started off promisingly as though it were going to be a decent if unremarkable thriller, with Mordred being sent for a mission which goes wrong. In the second half it degenerates into a series of odd alliances with people changing sides and allegiance. There is a seemingly interminable football match whose progress is described ad nauseam. The heavies are pantomime villains. The dialogue is strained. The action stops occasionally for a recap by the characters about the political background. Quite early on I lost interest in who was on which side. Suddenly there was a set piece showdown which fizzled out and we were back to John Mordred and his irritating sisters. If it is not spoof then it is just an uninteresting spy novel. If I want wry intelligent humour about the world of intelligence, I will stick with Len Deighton. If I want a more modern hard-edged humour I will stick with the peerless Mick Herron. A word on the reader. Unfortunately, all his men sounded the same (apart from the Scot) and there was no attempt to make the women sound like women. That made the dialogue very difficult to follow.

The Eastern Ukraine Question: John Mordred, Book 1. The style of writing is slightly familiar though I can't recall which book, it is written in that British upper class false modesty manner, but is a good read all the same. Entertaining and easy to listen to. Narration is excellent and accents very clear. I was given a free copy of this audio book at my own request, and voluntarily leave this review.

This is a well crafted Audio book with a great variety of characters that tries to mirror the current news in Europe. The Narrator does a good job with the material and makes the book more interesting. This book was given to me for free at my request and I provided this voluntary review.