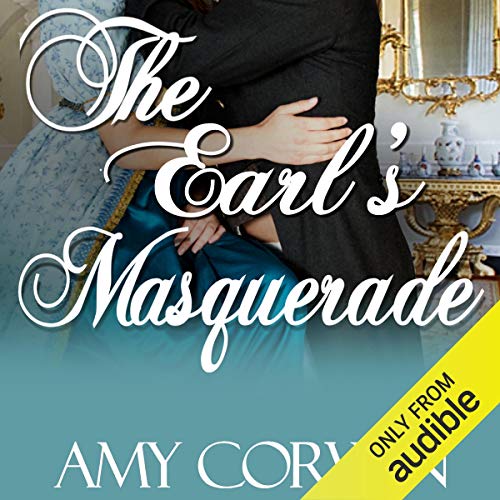 Grieving after the death of his younger brother, Hugh Castle, the Earl of Monnow, finds evidence to suggest it was not an accident, but a failed attempt to kill him. He vows revenge, planning to take advantage of the rumor that he is also dead to uncover the murderer.

But Hugh doesn't count on meeting another desperate adventurer, Helen Archer. She has lost the fabled Peckham Necklace at Hugh's home, Ormsby, and risks censure if she doesn't find it. So together, Helen and Hugh hatch the perfect plan. They will masquerade as servants to gain access to Hugh's grand house and accomplish their missions in secret.

Unfortunately, it is more limiting to work as servants than they thought, and their plans soon go awry. Increasingly attracted to Helen, Hugh finds it difficult to protect her from the unknown danger stalking the grand halls of Ormsby, and ultimately, he must decide if his heart's desire is truly revenge, or love.

What listeners say about The Earl's Masquerade

Edward is the jewel here!

Sadly the Archers don't make an appearance but the winner of this show was Edward! A brilliant and funny lad who adds much to the enjoyment of this story. The lead characters are nice enough, not half as sharp as Sarah & William from the previous book, but they are likeable enough and the storyline is decent. Not every couple can have great amounya od chutzpah. Still, Edward takes the cake!

I struggled for 2 days to try and finish this book. The narrator is really bad. dragging her words n monotone made it too difficult. Story might have been a great one.

A very enjoyable read. Mystery and (clean) romance with some very humorous parts that kept a smile on my face. Lots of hidden identities ultimately leading to a perfect conclusion. Very enjoyable narration with easily discernible characters.

Ruth was fantastic, as usual in performing this book. The story, Meh. too slow at the start and just didn't grow. I struggled finishing this book

I loved the story and the narrator. I can’t wait to read the next. It was a fun read.

what a delightful story. good characters and a good plot & narrator was a great.

I really enjoyed this book. In fact, I've enjoyed all of Amy Corwin's books I've read or listened to. You've got mystery, murder, attraction, an eccentric aunt, an erstwhile boy, a charming Earl and a lady in search of something lost. What more could you ask for? Oh, and don't forget about love. Can't wait to listen to the next book.

I love these stories......sometimes it's very hard to figure out the mystery with the story.

I discovered Georgette Heyer in the eighth grade and have been looking for tales like hers ever since. Sadly, most Regency novels are pretty awful. This on the other hand is really quite good. The situation is pretty far-fetched but let's be honest - we don't read this stuff for realism. Never mind, the heroine and her earl find reason to masquerade as servants and of course complications ensue. The characters are likeable, the plotting is well done, if fairly predictable, and everything wraps up neatly. The dialogue is a bit flat, lacking the wit of the best Regencies.

The narration is simply "okay", somewhat lifeless. I considered only two stars but bumped it up to three because ther is nothing grating about it to annoy me the way some readers of romances do. Not syrupy or overly "breathy", and none of the men sound like they are about to shape-shift into something vile.

I'll probably get more by this author for when I'm in the mood for something pleasant and not particularly challenging.

There is very little romance actually, mostly just running around and trying to solve a mystery and introducing secondary characters.

Helen lost the Peckham necklace, Edward wants to join the Navy and Hugh wants to find who sabotaged his boat. When these 3 meet up they will form an unlikely family! Another great read!!