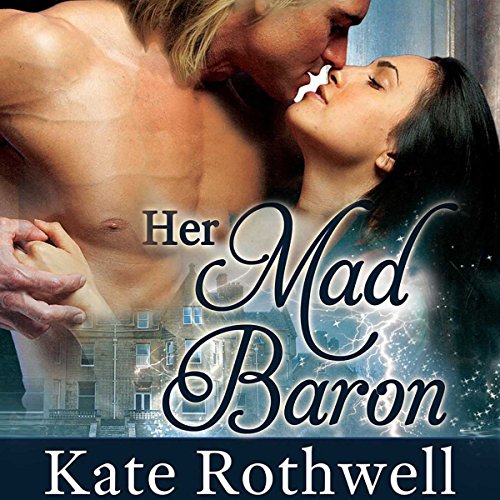 Nathaniel, the new Baron Felston, awakes from a fever to discover he's a prisoner on his own estate. At first, certain he's gone insane, Nathaniel learns potent opiates are the cause of his strange vision. But, barricaded in a small room, he can't outwit his mysterious jailer.

Determined to steal back one of her father's swords, Florrie Cadero gets more than she bargained for when she breaks into the baron's mansion. The dashing, drugged man in the locked room soon sweeps her into his story - and his bed. When she discovers they're trapped together, she devises a clever escape. Addicted to his captor's drugs and bent on revenge, Nathaniel seeks out the feisty thief who freed him. Florrie, now a shopgirl, has foresworn her life of adventure. But Nathaniel's offer of employment intrigues her. Together they must break his addiction and expose the villain who would destroy his life.

Originally published as The Mad Baron by Summer Devon. This version includes the first chapter of The Powder of Love.

What made the experience of listening to Her Mad Baron the most enjoyable?

Not only was the story steeped with emotional intrigue and inner battles the main characters had to face, it reflected the "emotional unattachment, distance" often seen between parents and children of that time period. Name and reputation were everything... and far more important that personal happiness or love.

What was one of the most memorable moments of Her Mad Baron?

I was touched by the mention of the harsh training Nathaniel had to endure as a child by his uncle in his effort to makehim a strong (proper, probably emotionally detatched) adult, and how deeply those actions affected his adulthood and relationship reactions. I can connect with the inner fear he experienced as a result of those actions. While researching my own family history I've uncovered many similar, harsh, emotionless relationships between parent and child. The abuse and harshness was a reality that broke my heart, but I know that not only emotional, but physical scars were left. Only a true, deep, calm reassuring love can eventually overcome such fears..

Bobby Hudson did a magnificient job narrating this book and bringing the characters to life! Very talented narrator for audio books. I adore audiobooks when the narrator is so talented. I admit that it is difficult for me to get enthused over narrators without a good cadence or voice inflection such as some of the early computer narrations. This one was absolutely wonderful! Kudos to Bobby Hudson for a fabuously talented job drawing the reader into the story by making Ms. Rothwells wonderful characters come to life.

I admit I had not listened to or read many other books by Ms. Rothwell before this, only shorter ones, but I have definately added her as one of my favorite authors and have already purchased more of her audio books to dive into. I'd easily recommend this book/audiobook, to friends by telling them how much I enjoyed this experience! : )

This is a very interesting story. It had a very strong heroine. Plenty of adventure and love. I loved it!

If you could sum up Her Mad Baron in three words, what would they be?

I love Kate Rothwell's books because they are so unique and interesting. If you're tired of the same old Victorian romance and looking for something memorable and fresh, try Her Mad Baron, a sexy and witty romp.

When the heroine is breaking into the castle.

this was a good story to help get you through hot chores on a lazy Saturday. I appreciate a strong confident character.