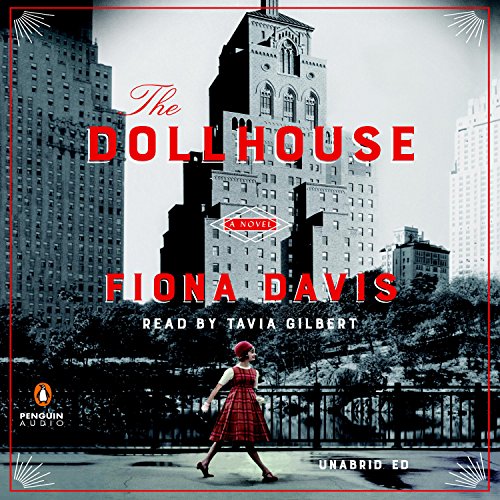 By: Fiona Davis
Narrated by: Tavia Gilbert
Try for £0.00

Enter the lush world of 1950s New York City, where a generation of aspiring models, secretaries, and editors live side by side in the glamorous Barbizon Hotel for Women while attempting to claw their way to fairy-tale success in this debut novel from the national best-selling author of The Chelsea Girls.

“Rich both in twists and period detail, this tale of big-city ambition is impossible to put down.” (People)

When she arrives at the famed Barbizon Hotel in 1952, secretarial school enrollment in hand, Darby McLaughlin is everything her modeling agency hall mates aren't: plain, self-conscious, homesick, and utterly convinced she doesn't belong - a notion the models do nothing to disabuse. Yet when Darby befriends Esme, a Barbizon maid, she's introduced to an entirely new side of New York City: seedy downtown jazz clubs where the music is as addictive as the heroin that's used there, the startling sounds of bebop, and even the possibility of romance.

Over half a century later, the Barbizon's gone condo, and most of its long-ago guests are forgotten. But rumors of Darby's involvement in a deadly skirmish with a hotel maid back in 1952 haunt the halls of the building as surely as the melancholy music that floats from the elderly woman's rent-controlled apartment. It's a combination too intoxicating for journalist Rose Lewin, Darby's upstairs neighbor, to resist - not to mention the perfect distraction from her own imploding personal life. Yet as Rose's obsession deepens, the ethics of her investigation become increasingly murky, and neither woman will remain unchanged when the shocking truth is finally revealed.

“Rich both in twists and period detail, this tale of big-city ambition is impossible to put down.” (People)

“The Dollhouse is a thrilling peek through a window into another world - one that readers will savor for a long time.”(Associated Press)

What listeners say about The Dollhouse

I read/listen to 2-3 books a week, so I have sort of developed a way to categorize books after finishing them:

I feel like this one falls into the 'buy it on sale' category. Interesting history, but not an experienced author and it showed. There were a few plot points that I felt weren't explained (can't elaborate without spoiling), and times that felt very 'Lifetime' for me, meaning silly/trivial misunderstandings creating the main obstacles for the characters. There were also parts that seemed to have no purpose - no character development, furthering of story, etc.
Would be a fine listen if you have a long drive - but wait until it's on sale.

The Dollhouse began with a fascinating story and was intrigued with the narration going between the two time periods involved in the story. The narrator was excellent.
As the story neared the final third of the book it became trite and predictable.

This story really needed more believable characters and plotlines. Quite a few times I felt myself thinking, no real person would actually say that, do that, react that way, etc. It just felt contrived and very corny. I was able to listen until the end but I was definitely not very absorbed in the story.

Would you ever listen to anything by Fiona Davis again?

The narration was a little bit corny to go along with the story itself - it's hard to tell which was contributing more to the effect.

What character would you cut from The Dollhouse?

The description makes it sound a lot more exciting than it is.

I was very disappointed in this story that seemed promising but played out like a bad Lifetime move, perky Nancy Drew, YA romance blend. The characters were one dimensional and I was disappointed in the lack of history and detail about the actual Barbizon and women's lives in the city at the time. The narrator was fine, but her overly perky performance only added to the effect of a bad lifetime movie.

Listenable but got progressively more ridiculous

First I had to get past the voice performer. Tavia Gilbert does excellent and distinct character voices, but the two main characters she performs (Rose in the present and Darby in '52) were a tiny bit overwrought. But I hung in there figuring I'd get used to it, and I did. All the other characters were performed really well.

Then the story itself gets progressively more unbelievable as the book progresses. I might have been more inclined to suspend disbelief if I had liked the two main characters. I feel like I should have liked them but instead found them a little insipid. Way too many tangled romances going on, way too much naïve "country bumpkinness," way too much of women who have zero self-confidence and kind of despise themselves.

The book had enough going for it to keep me listening (I like the structure of a person in the present trying to solve a mystery in the past--and you get both POVs) and I won't return it, but it was ok at best. The publisher calls this a "stunning debut." In no universe could this be considered "stunning." Granted, I think there are people far less critical than I who will really enjoy it, but "stunning" is stunning hyperbole!

The story was thin and predictable enough. It was even worse as the overly melodramatic reader was unbelievably annoying and terrible at portraying multiple characters.

I love how this book looks at life in 1950’s New York City at the Barbizon Hotel for Women and the Gibbs Secretarial School as week as 2016 NYC where the hotel has been renovated and women are much more accepted and diversified in their careers. As we all know, it has been a major change! I enjoyed the author’s writing and vivid descriptions. She (and the narrator) made 1950’s NYC and the characters come alive in my mind! I’ll be checking out Fiona Davis’ other book.

a really great book to escape into
enjoyed this one so much that I stayed in and curled up with it. highly recommend

Would you try another book from Fiona Davis and/or Tavia Gilbert?

It was Tavia's narration of Be Frank With Me that steered me toward this book. While Tavia herself is delightfully talented, I doubt I would pick up anything else by Fiona Davis.

Predictable. You knew exactly where this story was going from the very beginning. I sat through it anyway hoping for some redeeming quality or twist to shine through. But no such luck.

Do you think The Dollhouse needs a follow-up book? Why or why not?

No. This story was very neat and tidy. It was predictable and there are no loose ends. It felt very much like Fiona attended a writers workshop and this was the end product.

The story wasn't abysmal, but it was lacking the depth of character I prefer. I think perhaps this might be suited for a teenager's summer reading list and not for those of us who prefer imagery and the intensity of details.