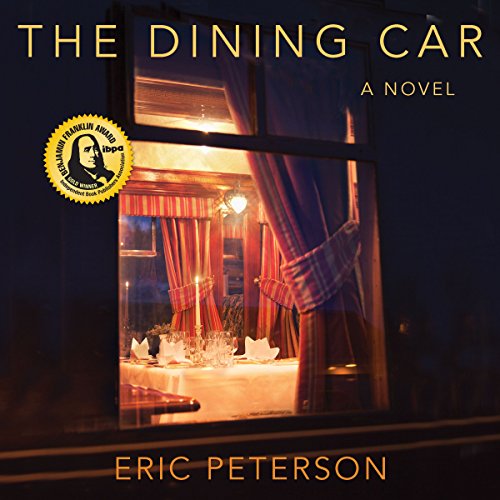 In his second novel, author Eric Peterson dishes up a riotous spectacle of self-absorbed chefs, backstabbing politicians, and devious publishing magnates, set against a backdrop of haute cuisine, presidential politics, and an endless supply of top-shelf liquor and wine.

Fresh from a public humiliation and in search of his true calling, former college football star Jack Marshall enlists as bartender and steward aboard Horace Button's vintage private railroad car, the "Pioneer Mother", which is transporting the legendary food writer and social critic across the country in opulent style.

Decked out in a white jacket, mixing perfect cocktails, Jack is immersed in a style of living - and dining - he'd assumed was extinct. While striving to appease the eccentric, finicky Horace and Wanda, the Pioneer Mother's enigmatic chef, Jack falls under the spell of Giselle Lebeau, a gorgeous celebrity chef whose designs on him test his self-control and his loyalty.

But when tragedy rocks Horace's insulated white-linen world, Jack must take charge of a simmering stew of quirky yet powerful personalities - all while staying in Wanda's good graces and keeping an eye on their newest passenger.

A story of service, serendipity, and second chances, The Dining Car is more than delectable - it's a marvelous, exuberant work of fiction.

Would you listen to The Dining Car again? Why?

Yes! what a delightful story! Crisp, refreshing and sprinkled with plenty of humor! The author has woven a wonderful and colorful story and the narrator has done a superb job of giving life to each individual character, whether male or female. All you have to do is sit back , close your eyes, and revel in the story! If I could, I would give this book 10 stars!!! How about a second novel or a movie!!

Horace Button. What a cranky boozer that you just can't help but know there is a gentler soul underneath all that bravado!

Oh my, there are too many scenes!!. I guess it would be when Horace first meets his niece. He made quite the public and embarrassing spectacle of himself!

If you could take any character from The Dining Car out to dinner, who would it be and why?

Wanda. I feel we really didn't get to know her as well as I would have liked. Besides, she is a fantastic chef!!

Just go out and get this audible version now!!! You will enjoy it immensely!!

What made the experience of listening to The Dining Car the most enjoyable?

Interesting story filled with an array of colorful, well-developed characters, excellent writing, and lots of humor, all brought wonderfully to life by Graham Hamilton's narration. He nails each and every character--and there are many--with an impressive plethora of voices and accents and compels the listener to keep on listening.