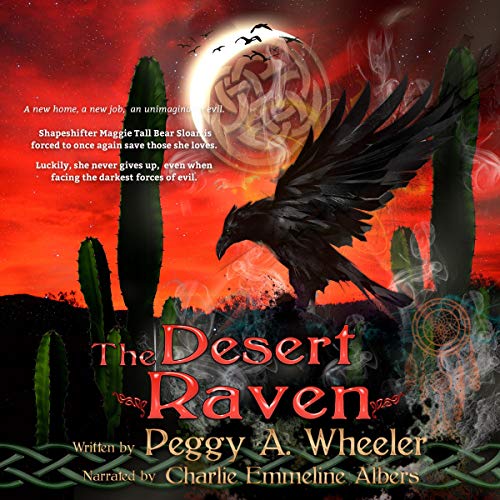 By: Peggy A. Wheeler
Narrated by: Charlie Emmeline Albers
Try for £0.00

Maggie Tall Bear Sloan, half Irish, half Yurok, and 100 percent gutsy, is a retired criminologist who shape-shifts into the Pukkekwerek, the Yurok nation’s monster-killing raven. After she brings down a cannibalistic child murderer possessed by a manitou, Maggie, and her lover, Jake Lubbock, a former sheriff, move from the mountains in Northern California to a desert town in Southern California. Maggie and Jake settle into their new community with one goal: an enjoyable retirement. She buys a pub, Jake writes a book, they both join the town's law enforcement reserves, spending Sundays with family. All is well for Maggie and Jake until the local sheriff shows them photos of a dentist, his wife, and teenage son, roasted over separate fires on spits, their flesh cannibalized. The police dub the murderer, “The Aunt Lorrie’s Salt Killer", because the murderer’s calling card is a container of the salt balanced on the victims’ corpses. Maggie suspects the Salt Killer may be the Chenoo, an ice-demon from Passamaquoddy and Micmac lore. The sheriff calls on Maggie and Jake to lead a task force to investigate, and that’s when things get strange. To complicate things, Sally, a ghost and Maggie’s closest friend, materializes to warn Maggie of an impending and unavoidable tragedy: Someone close to Maggie will die.

What listeners say about The Desert Raven

This might have been better if it had a different narrator. Now I'm not saying she was a bad narrator just not right for this book. Maggie sounded like she grew up and lived in Ireland. I preferred the narrator from the first book.
As for the story itself I was disappointed I loved the first book. Argh I keep back spacing over what I want to say. I hate spoilers no matter what I've tried to say gives spoilers.
Anyway for this one no I probably won't listen again.
This audio book was given to me for free at my request from the publisher or author or narrator and I provided this unbiased voluntary review.

Did not live up to expectations

The story would have been better and easier to listen to but the narrator killed it for me. This is my honest unbiased review.