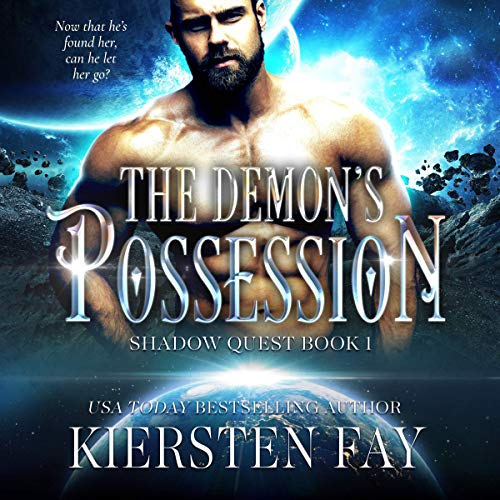 By: Kiersten Fay
Narrated by: Henry Jones
Try for £0.00

As captain of the merchant ship Marada, Sebastian has only one goal: keep his family and his crew safe while they deliver a curious parcel to the ruthless pirate Ethanule. But when a bewitching woman mysteriously appears on his ship, he finds it impossible to focus on the job...and to keep his hands off her. Could she be his long-awaited mate?

Analia has known only one life: servitude and enslavement. In a bid for freedom, she escapes onto a craft led by a fearsome demon captain. If she is to maintain her freedom, she must gain Sebastian's trust while concealing her true nature.

Together, they contend with the hazards of open space, but what no one knows is her secrets are more dangerous than anything they have encountered before.

The Demon's Possession is the first installment in the best-selling paranormal romance series Shadow Quest.

What listeners say about The Demon's Possession

Found this book while browsing and glad I did...♥︎

Glad I found this series as I loved this book and hopefully the rest are just as good .. thank you!!

I have very mixed feelings regarding this audiobook. I liked the story and characters. I would probably recommend people read the book. It was a nice mix of sci-fi, fantasy and paranormal romance. It was an interesting new world and a fairly new story. It had enough unique elements to it to make it stand out from so many other romance books I've read.

The problem with this audiobook is the quality. I wasn't very impressed with this narrator and he unfortunately also narrates the sequel. He mostly just read the book. There was very little inflection in his voice or differentiation between characters. This audiobook was also horribly edited. There were several lines that repeated 2 or 3 times. This did seem to improve as the book went on. The narrator also mispronounced several words, which was annoying. There were several times when the wrong word was obviously used. I don't know if that was the fault of the narrator or the author. A thorough re-editing of this audiobook would greatly improve it. All-in-all, I liked this audiobook and will read more by this author. I would recommend this story to other romance lovers, but if obvious editing mistakes annoy you read the book.

There were two things that made this a 3 star read: First and foremost, I found the dialog sophomoric. Pretty much throughout the book it read as a YA, sexual content notwithstanding. The second thing was that the narrator simply didn't have the vocal range to adequately read all parts. In fact, his voice lent to the YA vibe
I quit at around the 3/4 mark, and won't read a followup, however the writing was decent, and I liked the story premise. I probably should have just read it.

Took a little getting use to the Narrators voice but the story was good. I would recommend this book if you like Demons.

A well written, steamy science fiction thriller. This book was referred by a friend who thought that I might enjoy it.
Well, I did. It was exciting, dangerous and fun. Great writing and wonderful narration combine to transport the listener to a different universe.

New author to me and so far I really enjoyed the story plot and the narrator did a fabulous job. I recommend this for you if you enjoy reading or listening to demons and romances.

I am always reading one book at night and listening to another while working during the day. I probably read/listen to 15 to 20 books a month. I was about to stop reading because I was tired of the typical basic storyline. Then I seen this book and decided to give it one more try. Boy and I excited that I did. This is not your normal book. It has a storyline and plot of its own. It does not follow the same criteria that every other book out there does. I love it and can’t wait to read the next one. The narrator is lovely to listen too. From time to time it
Was hard to tell what character was speaking but it only happened a few time’s. I would love to listen to more books from this narrator.

The leading man actually cares for the leading lady and respects her choices. It was a breath of fresh air to be honest. The main heroine was strong and not 2S2L like these types of novels can be. great storyline and as a bit of a feminist I really was pleasantly surprised at how rarely it did those dumb romance novel tropes that tend to make the woman seem like some fantasy bimbo.

loved it could not stop listening. cant wait for the next one in the set

The narrator was spot on even with the female voices. This book has everything action; love; past challenges and twists to the story that you don’t see coming. I can’t wait to see what the next book brings I highly recommend this book

Good not great. Worth the listen.

A different narrator could've made this better. This one was automated and sounded like his nose was stuffed. He didn't put any variation on different characters voices, including women. It wasn't awful to listen to him, but kind of a chore.

I really like the heroine up until the last 45 minutes where she turned into a complete f@$^*ng idiot!! She makes good choices throughout most of the book and then it ends with her making the worst ones to "save her friends " who will be killed anyways and were already tortured.