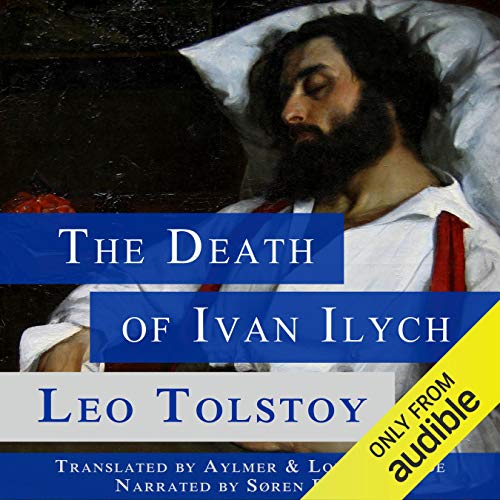 The Death of Ivan Ilych

Leo Tolstoy (1828-1910), author of War and Peace and Anna Karenina, was foremost among the great Russian novelists of the 19th century, and is widely considered one of the greatest writers of prose fiction in world history.

In his perceptive and moving depiction of Ivan Ilych, a worldly careerist facing his own mortality in the midst of a self-absorbed family and indifferent colleagues, Tolstoy provides one of literature's greatest and most memorable reflections on the meaning of the good life and on life as preparation for death.

This edition features the classic Oxford translation of Aylmer and Louise Maude, of whom Tolstoy himself said, "Better translators, both for knowledge of the two languages and for penetration into the very meaning of the matter translated, could not be invented."

What listeners say about The Death of Ivan Ilych

The performance was rather poor and the sound was problematic. Look for other editions of this book.

I needed to read this for a college assignment. I ended up really enjoying it. It truly is a masterpiece and I feel the narrator presented it well without distracting from the work itself. Would recommend.

Being completely new to Tolstoy, I was blown away by this story, and was left feeling thoroughly understood by its writer-- and yet more misunderstanding of myself than ever before. I found it to be a fantastic supplement after recently finishing Mere Christianity by C.S. Lewis; as I wrote when reviewing that title, I would recommend this book highly to my fellow followers of Christ, even more highly to those who do not follow Him, and most highly of all to those on the fence about the whole thing.

Whoever made this audiobook has no idea what they’re doing. Better to leave the slight background hiss than make it go silent here and there in the middle of hisses due to inept postproduction. I can’t stand listen to it.

An incomparable descent into the soul of a dying man. Tolstoy once again crafted a masterpiece.

perfect, Tolstoy is the Saint of peace, an Angel

Tolstoy travels beyond the realm of Literature & into the light of pure awakening & unborn brilliant goodness. . . Dhammadasa

Profoundly deep and though provoking. A must read. Could be life changing for many people.

Death is a subject normally avoided. However, Tolstoy’s story of Ivan’s life and death was captivating. Tolstoy is one of the world’s best storyteller’s!

Great story, listened straight through. The narrator did a terrific job. There were a couple of places were there was skipping on the audio and some interference, but I was still able to hear everything.

What was one of the most memorable moments of The Death of Ivan Ilych?

Ivan is utterly common in the way he fears death, and reflects on a life of pursuing comfort that ultimately has left him with no sense of meaning.

A great narrator should disappear completely, allowing the listener to experience the story. Soren repeatedly, jarringly, reminded me he was reading with strained intonations and unnatural-sounding dialogue. The quality of the recording was sub par as well, with a kind of distant static present throughout.

More people should reflect on death. Afterall, it was Heidegger that aid to live life more authentically, one should spend more time I'm graveyards.