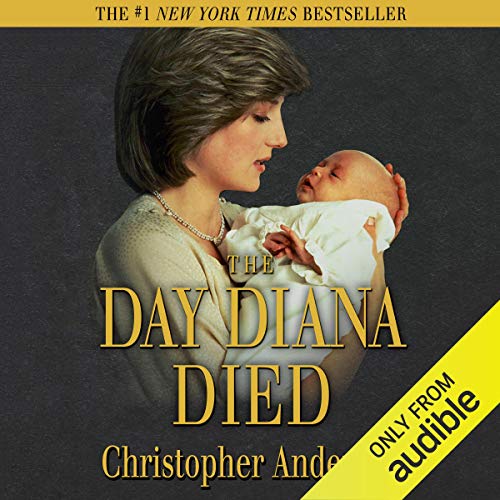 By: Christopher Andersen
Narrated by: Polly Lee
Try for £0.00

Where were you the day Diana died? Like the assassination of John F. Kennedy, the tragic death of the Princess of Wales on August 31, 1997, is one of the defining benchmarks in history - an event that touched each of us so profoundly we will never forget the moment we heard the news.

Twenty years after the Paris car crash that ended Diana's life at age 36, the story of her remarkable life and tragic death still have the power to mesmerize. Following her storybook wedding to Prince Charles, she had evolved from "Shy Di" into the planet's most photographed, written-about, and talked-about woman - indeed, the most famous person in the world.

For all Diana's global fame, much of the human drama that swirled around her death remained veiled in mystery and intrigue. Here, in the manner of his other 17 New York Times best sellers, Christopher Andersen draws upon important sources - many of whom are agreeing to speak for the first time - to re-create in vivid and often startling detail the events leading up to that fateful night in Paris. Among the many revelations:

Diana was, in every sense of the word, larger than life - a force of nature that, as the Royal Family learned, could be neither dismissed nor ignored. A bittersweet saga of triumph, love, and loss, The Day Diana Died captures those last days when Diana's star never shone brighter - and evokes the beauty, grace, heartache, and compassion that made Diana one of the most compelling figures of our time.

"The book that sparked a media frenzy." (The Washington Post)

What listeners say about The Day Diana Died

Good but not good

Well we all know the story...but there were some interesting bits in it that I did not know about. The most annoying part of the book was the narrator. She spoke with a posh voice and every time she was saying quoted words from a non royal she’d put on this semi common London accent-drove me mad!

The accents the reader uses when anyone speaks who is external to the straight narration in this novel are so unbearable. Think Dick van Dyke in Mary Poppins vs Anne Hathaway in One Day and you’ll just about get half way to how distractingly ridiculous they are.
Shame as there was a lot of interest in the novel, though the fabrication/ padding unnecessary (growing out of pyjamas etc ....)

Good book, let down by narrator.

Although this book is obviously well researched,the narration is dreadful, particularly the nurse in the hospital who sounds like Me Bean. Very distracting.

The Sad Events of Diana's Passing

This was my second book by this author, "The Day John Died" being my first. Like that book, this is extremely well researched, informative, shocking, sad and hard to put down. This book skillfully handled even the most details with sensitivity. I read this book using immersion reading while listening to the audio book. The narration handled the subject matter well and the pronunciation of the French names beautifully. While speculation is minimal, this book sticks to the facts. Hard to put down.

Seemed almost like peering through Diana's personal window. At times felt I shouldn't be looking. Overall a very sad reflection on the monarchy and her family.

This book provided great details about the life and death of Diana. I really enjoyed listening to this book. The story was done very tastefully and satisfied my curiosity about many of the details involving her death. The world lost a very exceptional person.

I remember my brother coming to my bedroom door to tell me that Diana had been badly injured in a car accident in Paris...I immediately turned on my tv to get an update and the Fell asleep...I woke up around 5am to the news that she had died....what a shock !....Well told story... brought back many sad emotionslos for me.

The last two hours were the highlight of the book, offering details regarding Diana's death that were not well known outside the UK. Otherwise, the rest was rather familiar. A bit too much emphasis on her early naiveté, author could have expounded more on her passion for humanitarian causes, her "magic" that made billions shed tears when she died. Petty things like her feud with Fergie felt like cheap gossip you read in the tabloids...author could have skipped those parts, Fergie already exploited that story.

I’m glad I ignored the bad reviews about the narration. While I didn’t necessarily disagree with them, the narration wasn’t so bad as to put me off the book. The narrator has a good speaking voice, but when she tried to do “voices” or accents, she sounded
a bit silly. Voices/accents are fine for fiction, but if you’re narrating a biography or an account of an event, just speak it straight. Still a great listen, though.

I think the terrible nasal American accent first assaulted me however the unimaginable butchering of the French accent topped it.
Sorry but I had to stop listening before my poor ears rang any louder.

This is an ok revisiting of that sad time when Princess Diana died. Most of the material will be well known to most people, but there are a few interesting bits of new info thrown in here and there.

While narrator Polly Lee has a pleasant, gentle voice, her mispronunciations are as grating as her vocalizations of assorted bystanders. (Placido Domingo's first name is pronounced PLA' cee do, not Pla CEE' do; the name of Diana's childhood home, Althorp, is pronounced AL' thrup, another example of the difference between the spelling and the pronunciation of many British proper names. It's difficult to understand why Ms. Lee doesn't know this.) In lending the Latin term "annus horribilis" a distinctly French tone, we see that she did not study Latin in school and didn't bother to check with someone who did. Then there are the inexplicable slip-ups such as "aminated" for animated, "fingering" for lingering. Most peculiar. Worst of all are her vocalizations of EVERYBODY who contributed comments on the tragedy. Deep-throated glottal stretches do not = male voices, or Margaret Thatcher's either. And I do hope that Bill Clinton can laugh if he ever hears her version of his Arkansas accent.