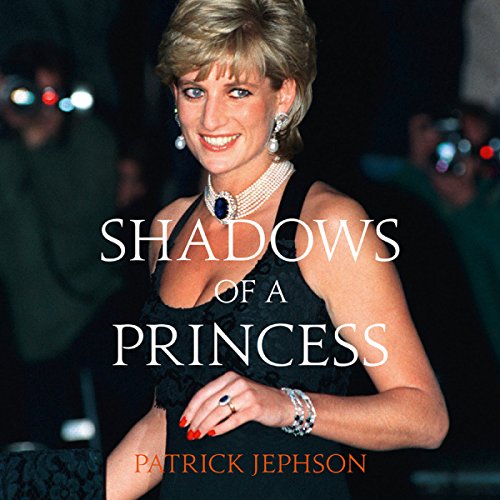 Shadows of a Princess

Reissued for the 20th anniversary of Diana's death, this sensational best seller is an explosive account of her life, from the man who was by her side throughout its most turbulent period.

In 1981 Lady Diana Spencer was seen by many as a lifeline for the outdated Windsor line. But Diana didn't follow the script. Instead she brought a revolution.

Patrick Jephson was Diana's closest aide and adviser during her years of greatest public fame and deepest personal crisis. He witnessed the disintegration of her marriage to Prince Charles and the negotiation of the royal divorce.

Rooted in unique firsthand experience, Shadows of a Princess is an authoritative, balanced account of one of the world's most famous and tragic women.

"The most indelible, authentic word-portrait ever painted of the People's Princess." ( The Daily Mail)
"Never has so senior a servant of the Royal Family decided to reveal his secrets and rarely has one witnessed such turbulent times." ( The Times)
"Jephson's revelations are important. They are a stark corrective to the baroque fantasies constructed around the Princess immediately after her death." ( Evening Standard)

What listeners say about Shadows of a Princess

Story of a person who is like anyone else

I read few books about Princess Diana as I wanted to understand her as a royal and as a person. If it is your first book about Princess Diana, you should read few others too by different authors. Each book I read portray her from different perspectives and this one, in particular, shows her kinda "bad" side. What I am trying to say is that be prepared or willing to read other books about her as well or do not read any. She is a quite complicated person, or she is just pure Narcissistic personality, or she is a snob. Reading other books will help you understand for yourself who she was.

A brilliant book, written beautifully and so honest. It was a joy to listen to the author reading it. I loved it.

When I heard the opening scenario of the book it put me right off. I decided to push on through as I believed that Jephson had an authentic and valid insight into the true character and life of the Princess during his service with her. I'm glad I did. This all needed saying to offset the many sycophantic offerings about Diana on the market.
Sadly Diana was messed up and broken. Her reckless and often cruel behaviour testifies to this: but equally messed up is Prince Charles and the whole palace system. I believe that pre-existing character flaws in Diana's personality were inflamed and grew to monstrous pro portions by the foul treatment she received from Charles and the Palace when they had the care of her. This was a great dereliction of duty on their part. I hope that Jephson, who writes and narrates this with his tongue firmly in his cheek didn't suffer too badly as a result of writing this expose'.

A boring story told in the most boring manner. This man has his head firmly stuck up somewhere it shouldn't be. He has the audacity to criticise other biographies of the Princess of Wales. I've read a few and frankly they were infinitely better written and better narrated than this rubbish. What a horrid little man Patrick Jephson is. I CATEGORICALLY DO NOT RECOMMEND THIS BOOK, IT'S UNBELIEVABLY BORING

Fascinating book with the clear ring of truth

I thought this book might be interesting after I saw Patrick Jephson interviewed on a TV program. His account in this book makes sense of the brilliant, complex and emotionally injured person we all caught glimpses of. It left me feeling immensely sad and with much more compassion than before . Definitely worth investing the time to understand this chapter of our history.

I liked the candour of the author - it’s the closest I think we will ever get to a portrait of the real Diana - I don’t believe the Queen of Hearts stuff that is peddled - I believe she was a complex human being with faults and good points - she was undoubtedly controlled by her somewhat unpredictable emotions.

Have you ever read a book that makes you want to just sit down with the author and really talk? This account makes me want to spend a long evening with Patrick Jephson and philosophize about what might have been, had his boss made different choices.

Do not expect a gushy recounting of the lurid details of Diana's private life. Rather, this is a firsthand look of what she was like as a working member of the royal family in the turbulent years surrounding her separation and divorce. As her equerry and later private secretary, Jephson gives a tantalizing look at what it is like to run the day to day details of the life of the most famous woman in the world.

His occasional tendency to wander into mind numbing detail and drawn out reflection is the book's only fault. However he receives all forgiveness in my eyes for his ability to be perfectly candid about the Princess. Here is complete honesty about her strengths and weaknesses in equal measure from first hand observation, not supposition or armchair psychology.

After listening, one feels like they understand Diana...and those close to her...in a new way. Jephson offers no excuse for her often bewildering behavior, but he also accurately portrays the unique and extreme challenges that she faced so that her actions are placed in context. This is probably the most balanced account out there of the complex Princess.

I enjoyed reading the book, and listening to it read by the author was even better. A new chapter at the end is a pleasant surprise and welcome addition as the original edition ended far too abruptly. If you want to draw your own conclusions about what the princess was really like, without having an author cast her in a premade role of angel or devil, this is the book for you!

Yes, he tells the story wonderfully.

What was one of the most memorable moments of Shadows of a Princess?

She should have been Queen

Could not put this down. One of the rare occasions when the author narrates, and it couldn’t have been better-done by a professional. Jephson’s nuanced account of the Famous Princess, takes you inside the Palace walls and straight into the inner workings of day-to-day life of Diana, Princess of Wales. The author takes a long hard look her, and reveals her compassion for others, and alternately, her desperate need for attention. More importantly, he takes us straight into her life, as if he were reading her journal, and he it’s a journal he often scripted for her. Until she goes off on her own self-destructive path, and he finally walks away.
I wish he had been hired by Megan and Harry, and could write that story...

Story appears to be against the beautiful person Diana was

Will not finish this book and will get my money back to purchase the real story of Diana in her own words!

So the book was sorta interesting. But the author should’ve never done the narration. He speaks in a very slooooowwwww monotone that puts one to sleep.