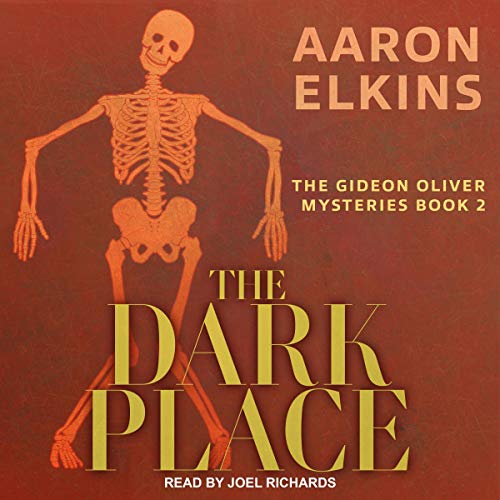 By: Aaron Elkins
Narrated by: Joel Richards
Try for £0.00

Gideon Oliver earns his moniker "The Skeleton Detective" in this riveting entry to the Edgar Award-winning mystery series "that never disappoints" (The Philadelphia Inquirer).

Deep in the primeval rainforest of Washington state's Olympic Peninsula, the skeletal remains of a murdered man are discovered. And a strange, unsettling tale begins to unfold, for forensic anthropologist Gideon Oliver determines that the murder weapon was a primitive bone spear of a type not seen for the last 10,000 years. And whoever - or whatever - hurled it did so with seemingly superhuman force. Bigfoot "sightings" immediately crop up, but Gideon is not buying them.

But something is continuing to kill people, and Gideon, helped by forest ranger Julie Tendler and FBI special agent John Lau, plunges into the dark heart of an unexplored wilderness to uncover the bizarre, astonishing explanation.

What listeners say about The Dark Place

Would like to hear more anthro and less romance

When reading a new author I like to begin with the earliest book and come forward - as I did with Elkin and a Dark Place, his second Gideon Oliver book (because I couldn't locate the first book). Admittedly it was only his second book and it was written more than 30 years ago but I found the anthropology shallow- as in Anthro 101 - and the over-abundance of romance distracting. I almost quit but stayed with it to the last. Will give Elkin and Gideon another try hoping his later books are heavier on anthro. Almost as good as Kathy Reichs ~ at least in this book ~ he was not. Not even close.

I was disappointed. The premise was weak. The writing was unimaginative. The writing around the protagonist felt like wish fulfillment on the part of the author.

I really enjoyed this story. I live in Sequim and of course love to read about my area. This is the 3rd book in this series that I have read after randomly choosing two other titles, I thought I may as well start at the beginning and read through the series. I love a good mystery.


I purchased the Audiobook and was extremely impressed with the narrator. He was easy to listen to. I loved that it was set in the Pacific Northwest and can relate to the environment having grown up there. The story line was very interesting and had plenty of suspense to keep you on your toes. I definitely loved the ending. I’m looking forward to reading the next book in the series

I still like this one even after a number of years. I'd forgotten the romance novel stuff, but I was more than happy to reread all of the anthro. It was nice hearing about University of Wisconsin and Gideon's friends in anthropology and the FBI. The mystery was solid with good writing and problem solving.
Joel Richards did a nice job of narrating.

As much as I wanted to like this,
it fell short of focused study of
ancient Indian tradition and
scholarly attention.