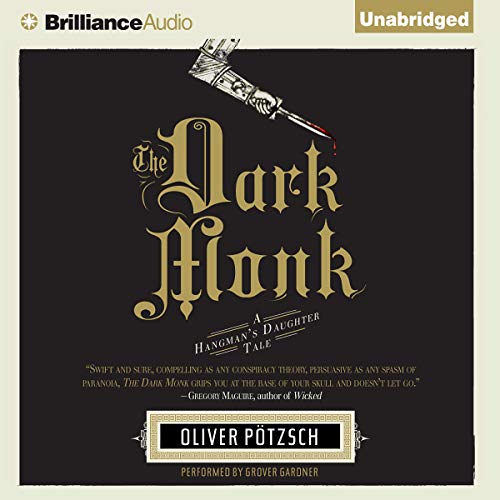 It is 1648, a small village in the Alps: In the thick of a blizzard,a town priest discovers he’s been poisoned. As numbness creeps up his body, he summons the last of his strength and scratches a sign in the frost that will lead the town hangman, his daughter, and the town physician in pursuit of a treasure of the Knights Templar. But the priest’s murderer is already on their trail, and he’s not the only one after the legendary fortune: a dark monk is not far behind,and a band of thieves is roving the countryside, attacking solitary travelers and spreading panic. The race is on, and the stakes are high.

Delivering on the promise of his first book, Oliver Pötzsch takes readers on a whirlwind tour through the occult hiding places of Bavaria’s ancient monasteries, bringing to life the compassionate hangman - who’s destined to join the ranks of literature’s most beloved characters.

What listeners say about The Dark Monk

Initially the American voice grates because it's not a German accent but you soon get used to it. Narrated well with different voices by one narrator and read with drama. It's great for when you don't want to listen with full attention, you can miss bits and keep on going with the story. It has charming touches and its epilogue offers a voice guided tour of Bavaria.

Yet another great story in this series.

I had never heard of this author until a month and a half ago. I've now read 3 of the series and can't get enough. The mixture of historical facts with the authors immense imagination and his families ancient history all make for a fantastic read/listen that keeps you on the edge of your seat.

I really liked The Hangman’s Daughter, so I was hoping the sequel, The Dark Monk, would be just as good. Well, I actually liked the sequel more than the original book (by just a bit). The author, Oliver Pötzsch, is very good at pacing the narrative so it moves along quickly and never lags or falters. Either Pötzsch has a talented editor or he is graced with a marvelous gift for narrative. Admittedly, there are perhaps just a few too many cliff-hangers, but then you are carried along with the flow of the narrative and don’t realize that until later assuming you think about what you’ve read (or heard). I’m not sure the books are meant to do anything but entertain, but they give you a glimpse of life in 17th century Germany (and by implication much of Europe as well). Jakob Kuisl is the Executioner of Schongau, and he is the lens through which you view the interesting if brutal life of the time. The Hangman’s Daughter series is unique; it’s history mystery at its very best. As for Audible’s narrator, Grover Gardner, I can think of no one today whose voice and narrative skills would be better. His elocution and pronunciation are just right, and the voice seems appropriate to his subject.

The Real Discovery of Penicillin!

I liked "The Dark Monk" better than its predecessor, "The Hangman's Daughter." It tells a better story, and it has fewer horrific descriptions of Midieval torture. (Yes, I know that this story technically takes place during the Reformation, but the people and villages depicted here still seem locked deep in the Middle Ages.) I also liked it better because of Pötzsch's increased inclusion of herbology in this story. Here, Pötzsch speculates about the original discovery of Penicillin, attributing it to one of his characters. Such speculation makes some sense: Practicing herbalists may, indeed, have quietly discovered the antibiotic properties of certain molds prior to Alexander Flemming's official discovery of Penicillium rubens in 1928. With "The Hangman's Daughter," Pötzsch built a tale around one of his real 17th-century forebears: a veritable village executioner. Whodathunk that anyone could make a hero out of someone who tortures and murders for a living? I, personally, find this character difficult to believe -- an executioner with a gentle heart and the gift of healing? However, if you can swallow that premise, then you might like "The Dark Monk," in which the executioner, his daughter, and her lover solve another mystery. And what a mystery they solve: the location and nature of the lost Templar treasure! The narrator, Grover Gardner, also does a better job with this audiobook than he did with "The Hangman's Daughter," using a wider variety of voices to distinguish the characters. He doesn't have very good accents in his repertory, but he makes attempts, as necessary. I hesitate to say this -- because "The Hangman's Daughter" contains a lot of harrowing scenes of cruelty -- but you will probably enjoy "The Dark Monk" better if you have listened to "The Hangman's Daughter" first. You stand forewarned.

I like the series, but wish that more time had been used to round out the tale. Alot of the plot smacks of the fantasical - too much so for a book that's supposed to be an historical novel. I really want to like to like it more than I actually do.

this book was great. I thought even better than the first. the daughter plays a bigger role and she's a totally awesome strong woman. loved it, will listen to it again and again

Another fantastic historical thriller from the 1660s in Germany. Oliver Potzsch is quickly becoming a new favorite of mine. I think I may have liked this one even more than the first in the series. There was a 50% off sale at Audible, so I bought the last three in the series and look quite forward to reading/listening to them. I thought the characters had depth and the story kept my interest. It was read by Grover Gardner who did a fine job with the narration. Love this narrator! Story 5 stars. Narration 5 stars.

'The Dark Monk' is the the scariest antagonist in this exciting 1660 mystery series so far! He means business. The dark monk is killing for god, well, also maybe a bit for his own sake, to tell the truth. Templar secrets are involved! It means a hot time is in store for Schongau's hangman, Jakob Kuisl, and his daughter, Magdalena...

A great book & well worth the credit..

I bought the first book on a fluke and loved every minute. Since then, I've listened to the whole series, and passionately awaiting the next issue.

I also like the timeframe and backdrop for the story. I look forward to more from Oliver....

My review of the first book in this series criticized the narrator as being somewhat flat and monotonous but that is not the case with this book. The story is pretty good but the narration is great! I wouldn't call this an "edge of your seat" mystery but it is definitely interesting enough to keep you hooked.

Perhaps it is due to the translation, but the writing is bland. If my German was better, I would have liked to hear the story in its original language. Maybe it would have been better.