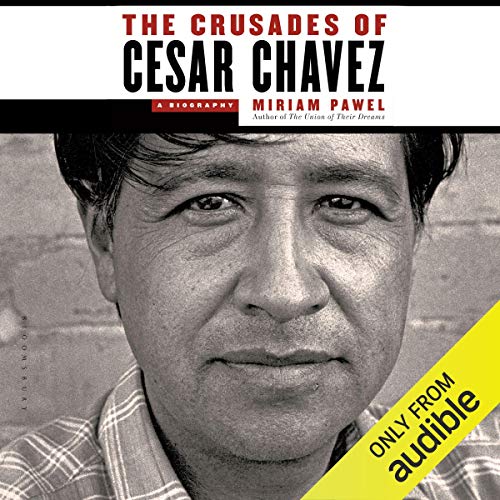 The Crusades of Cesar Chavez

Cesar Chavez founded a labor union, launched a movement, and inspired a generation. He rose from migrant worker to national icon, becoming one of the great charismatic leaders of the 20th century. Two decades after his death, Chavez remains the most significant Latino leader in US history. Yet his life story has been told only in hagiography - until now.

In the first comprehensive biography of Chavez, Miriam Pawel offers a searching yet empathetic portrayal. Chavez emerges here as a visionary figure with tragic flaws; a brilliant strategist who sometimes stumbled; and a canny, streetwise organizer whose pragmatism was often at odds with his elusive, soaring dreams. He was an experimental thinker with eclectic passions - an avid, self-educated historian and a disciple of Gandhian non-violent protest.

Drawing on thousands of documents and scores of interviews, this superbly written life deepens our understanding of one of Chavez's most salient qualities: his profound humanity. Pawel traces Chavez's remarkable career as he conceived strategies that empowered the poor and vanquished California's powerful agriculture industry, and his later shift from inspirational leadership to a cult of personality, with tragic consequences for the union he had built. The Crusades of Cesar Chavez reveals how this most unlikely American hero ignited one of the great social movements of our time.

What listeners say about The Crusades of Cesar Chavez

This book is incredible, a barely believable story about one of the most charismatic and strange figures in the recent history of the USA. Unfortunately the reading was not good at all, I am very tolerant of audiobook readings, I go with the flow generally, but this was one of the worst I have listened to, words mispronounced and not just once but the same word mispronounced several times in different ways; and making dramatic pauses in a sentence is fine but to do it in completely random places in the sentence is not.

What did you love best about The Crusades of Cesar Chavez?

It showed his development as a leader in an honest way, so that future leaders can use his life like a case study on effective leadership, and see the "lid" that kept him from growing outside of California. The book worked hard to cut through the hero worship and honestly show the real man.

He is obviously a Spanish speaker, and narrated in a way that made Chavez sound real. I had to speed his voice up to 1.5x to make it sound right to me, because he speaks very slowly, but overall, he has a compassionate, funny, emotionally on key voice.

I don’t normally write a review, my one and only issue with the audiobook is the Narrator Jackson Gutierrez, I truly believe a better narrator could been found. Other then that this is an amazing work and truly eye opening.

Great insight into a great leader

Great narration at a good pace. I was really fascinated about the in depth and unbiased look into this amazing man. This is probably the most comprehensive look into the life of Cesar Chavez out there.

A well documented biography of Cesar Chávez. While the story was enjoyable, the only drawback was the profanity. Understand that the author is trying to use original material, but my thought is that there is no need for so much vulgar language to give the story its authenticity.