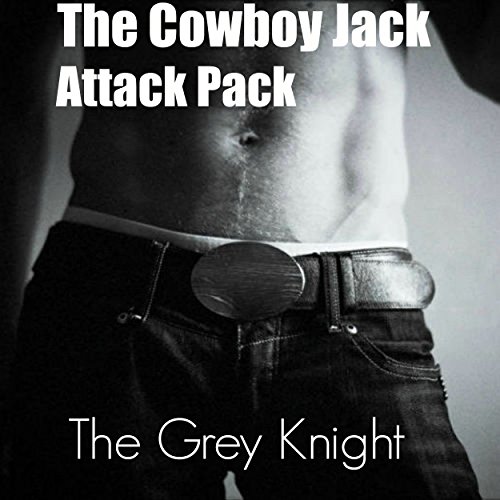 The very best of first-person cowboy erotica, where I say exactly what I'm going to do to you. No matter if it's riding lessons or teaching you the ropes (lassos), you'll be turned on, turned up, and ready to play. Oh yes, you will, oh yes, you will.

What listeners say about The Cowboy Jack Attack Pack

If you could sum up The Cowboy Jack Attack Pack in three words, what would they be?

What other book might you compare The Cowboy Jack Attack Pack to and why?

Which character – as performed by The Grey Knight – was your favorite?

I don't want to give away any spoilers, but what you end up doing with the rope in "Rodeo" made me laugh out loud.

We all need more Cowboy Jack. The author has said he needs to be in just the right frame of mind to do these stories, so if we're lucky, that circumstance will come around again and again.

Would you listen to The Cowboy Jack Attack Pack again? Why?

Now cowboys aren't typically my thing (being European and all), but I have to admit Cowboy Jack does have a certain kind of charm. He's always rearing to go wit impeccable manners. Maybe something about the voice that does it too :P

I like that each chapter is a new little story/fantasy. That way, I can pop one on, lie down and let Jack do his job (so to say).

Have you listened to any of The Grey Knight’s other performances before? How does this one compare?

Cowboy Jack - a dirty cowboy at his best

I really love the performance of the author/narrator. It feels real to a much larger extent than normal erotica audiobooks. I can place myself in the story and it feels like a person, not so much a fictional character. I think this sort of narration is the way to go forward in audiobooks.

cowboy jack is in my dreams!

so thrilling and exciting had me on edge for the longest time truly a joy to listen to without a doubt! cowboy jack will be transfixed into my dreams!

Cowboy Jack is one of my favourite of The Grey Knight's personas - he's sassy, sexy and oh, so naughty! TGK's voice melts into the kind of drawl that's designed to send goosebumps across one's flesh. The way Cowboy Jack flirts is both charming and adorable - I listen to all these with a grin on my face. And he's always so polite even as he's encouraging the nameless woman into all sorts of shenanigans. All the little asides as he talks to Penelope (his horse) or himself (oh, Rodeo!) are the cherry on top. You can't go wrong with this collection. More Cowboy Jack, please!

Cowboy Jack is awesome! The Grey Knight brings to life a devilishly charming cowboy who likes pretty ladies, and the result is not only sexy but playful and funny. It's told as what he's doing to YOU, so you can't help but put yourself into the story, and get lost in his sensual voice, and his sounds (that low sexy laugh! Be still, my flip-flopping tummy!). It's a really raunchy read, buuuuuut sometimes that's just what you need. Also isn't that what you ask for in erotica? I know personally I'm looking forward to diving into my sheets with his next book.

I am absolutely in lust with Cowboy Jack. I just had to buy this audiobook so that I could have it on the go - I love how bad he is. This is one book I can listen to over and over again!