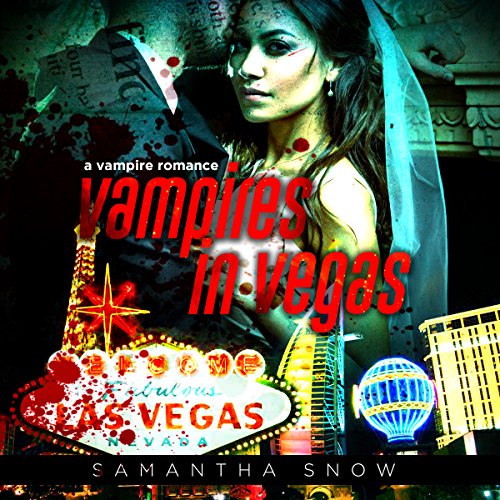 Shy librarian Ella McCormack was well aware that what happened in Vegas, stayed there but she never thought it would happen like this.

When a bachelorette party in Sin City got a little bit rowdy, Ella found herself cornered by a bunch of overly pushy men. Coming to her rescue was an impossibly handsome man named Reagan Morgan. A man that Ella found herself immediately infatuated with.

But Ella had no idea that Reagan was a vampire. One of many that reside in Las Vegas.

And by the time she found out, it was already be too late.

This is a unique spin on the average vampire romance. Set in Las Vegas you can expect thrills, spills, and naughty scenes galore. What happens in this book, stays in this book so get listening right now!

What listeners say about Vampires in Vegas

What made the experience of listening to Vampires in Vegas the most enjoyable?

Everything about this story was just so good so exciting. A girl who had been held back by her own insecurities and a jealous friend, finally has her day. She meets and falls in love with a handsome vampire and they change each other's lives. His vampire clan also try to separate them and that part of the narrative is nerve racking and had my heart rate going up. J Scott Bennett's performance really enhanced my pleasure in the story, especially the scene in the chamber with the vampire council. This is a wonderful love story well written and beautifully performed and deserved the 5 stars I gave it.

Off late I have noticed that paranormal romances change or enhance the basic nature of vampires. Sometimes they sparkle Sometimes they walk about in the day. And so on.

Samantha Snow has, refreshingly, gone back to the basics. Her vampire characters are strong immortal creatures of the night with a deadly allergy to the sun. They function mostly separately to humans and consider humans beneath them.

Shy, quiet librarian Ella and alpha vampire Reagan's pairing goes pretty much as expected. Their story, though not the best I've heard in this genre, ticks most of the boxes on what is expected, is easy to listen to and has the necessary HEA. J. Scott Bennett has provided a good narration.

What was one of the most memorable moments of Vampires in Vegas?

A timid woman coming into her own when she finds her true love is a handsome vampire. Some of this book are little repetitive but keep listening to the end . There might be a nice surprise.

This Was A Good Vampire Story

Would you consider the audio edition of Vampires in Vegas to be better than the print version?

I did not read the print but I always think audio is better.

What was one of the most memorable moments of Vampires in Vegas?

When they were preparing to kill the two lovers and the simpering enforcer said perhaps there is another way to end this. i was prepared to hate him because he seemed to enjoy torturing people but when he said this I changed my mind.

All of the emotions, drama, and action were given a voice that you, as a reader, have to supply in a print book.

I got this book via audiobook boom. I would listen to another book by this author if it is in the same catagory.

The story was interesting and kept my attention all the way to the end. I was surprised that this is not a dark romance. Reagan is quite the gentleman and actually protects Ella from some shady humans that were dragging her out against her will.

The narration was well done and brought the book to life.

Ella made some odd decisions around her "best" friend and the other bridesmaids. Honestly, you have to be stupid to accept any medication or drinks from people that don't really like you!!!

I found myself disliking several secondary characters. My favorite character was Reagan. He was very old fashioned and believed in true love.

The story picks up towards the end and there are some twists to keep it interesting.

This is a fast paced, entertaining but predictable story. The sex scenes were well written, the story flowed nicely and the characters were interesting but I found it lacked complexity, without as much sex it would have made a good YA story. What made it enjoyable for me was the excellent narration in the audiobook, J Scott Bennett brought the characters to life, imbuing them with more emotions and dimension than is apparent in the writing alone. 5 star for the narration and 3 for the story. I received that audiobook as a gift.

Ella goes to Vegas for her friend's bachelorette party. While in Vegas, she meets Reagan, a vampire after he rescues her. Eventually he reveals himself to her as a vampire. The vampire council get involved and were going to kill Ella until Reagan steps in. I had a really hard time getting into this book. At some point, I will listen again and, at that time, will update my review.

J Scott Bennett did an OK job with the narration although he made Ella and her friends sound so much older than their mid-20's. I received this free copy audiobook at my request and have voluntarily left this review.

A lighter view of vampire. A little reminiscent of twilight, though I liked this better. Not as much angst or stupidity.
The narrator brought the story to life.
This audiobook was given to me for free at my request from the publisher or author or narrator and I provided this voluntary review.

Okay Vampire Story, but Not My Favorite

I was provided this audiobook at no charge by the author, publisher and/or narrator in exchange for an unbiased review via Audiobook Boom. It took a while to get into this story because the female characters are so annoying, and I understand why for the story, but they still annoyed me. I loved the Vampire character and the small introduction to the vampire world in the story, and wanted more. I feel like the writer spent too much time building up the annoying characters and not enough on the Vampires and their world. The audiobook is just over 5 hours and so once you are introduced to the Vampires and their world, the story is rushed and over too soon. I loved the narration and how it was from 3rd person so a single male narrator could perform the entire book. I would have just preferred more from the male Vampires side than the annoying female characters side.

This is a great book; this is a great book written by Samantha Snow and narrated by J. Scott Bennett. Shy librarian Ella McCormack was well aware that what happened in Vegas, stayed there but she never thought it would happen like this. When a bachelorette party in Sin City got a little bit rowdy, Ella found herself cornered by a bunch of overly pushy men. Coming to her rescue was an impossibly handsome man named Reagan Morgan. A man that Ella found herself immediately infatuated with. But Ella had no idea that Reagan was a vampire. One of many that reside in Las Vegas. And by the time she found out, it was already be too late.This is a great set with a wonderful story and well developed characters. The story flowed very well and was very enjoyable. This book will keep you reading long into the night and you will not want to put this book down until you finish. This was such a great read and full of surprises.The narrator J. Scott Bennett did a wonderful job with this book. She did a great job with the different voices of each character in this book. It was very easy to listen to and I didn’t want to stop listening until the end. If you are looking for a great book with well-developed characters then you need to listen to this book. I am looking forward to listening to the next book by this author and narrator. I voluntarily reviewed an advanced reader’s copy of this book. The free book held no determination on my personal review.

A decent story with good narration

I thought this book was fair. I think the story and characters are predictable and the setting has been used quite a bit in similar books. The main issue for me is that I just didn't like either main character. I didn't hate the story but I didn't love it either. It's an overall fair audio book. The narrator was good though. I was voluntarily provided this free review copy audiobook by the author, narrator, or publisher.

I really enjoyed this story. A bachelorette getaway in Vegas turns out to be a life altering adventure for Ella, who has been talked into coming along. Ella considers herself a boring plain jane. She soon meets handsome Reagan and he doesn't think of her as plain at all. Sparks fly between the two while friction builds between Ella and her "friends". The narrator did an excellent job with all of the voices/characters.