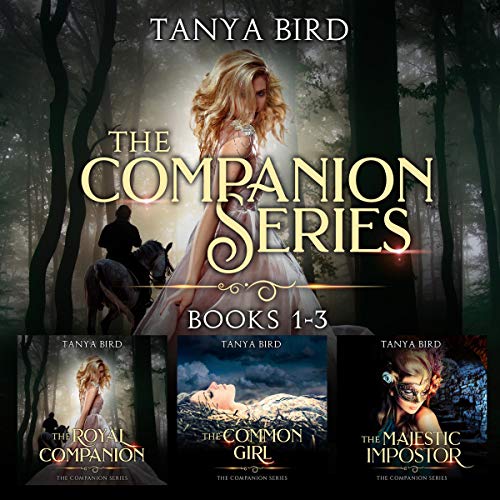 By: Tanya Bird
Narrated by: Elizabeth Klett
Try for £0.00

The Royal Companion (book one)

She is the gift he did not want. He is the prince she is forbidden to love.

Sold to the obnoxious crown prince as a gift for his brother, Aldara travels to Archdale Castle, where she is mentored to become Prince Tyron’s perfect companion. But no amount of lessons can prepare her for the man marked by war.

Tyron has just returned from war. All he wants is privacy to grieve the men who died at the border. When his brother gifts him a companion upon his return, he is forced to embrace a tradition he has so far managed to avoid.

Except, Aldara is not like the others. She walks with her face to the sun. Her laughter makes him forget the lie. But if they ignore the rules that safeguard them, there will be consequences....

Love has never been more dangerous.

Aldara never wanted to be a companion, but the choice was made for her. She never imagined she would grow to love the man who owns her more than her own freedom.

But when her life at Archdale begins to crumble, Tyron sends her back to the safety of her family, where she must find a way to exist without him. As Zoelin continues to tighten its grip on Syrasan, the pair soon discovers there are no safe havens.

A relentless love. An impossible choice.

Prince Tyron is adjusting to life under his brother’s rule. Shifts in power see him sent to Corneo to take control of the West. Amid the throes of war, he learns that the woman who still holds his heart has been keeping a secret. An impulsive decision delivers him into enemy hands with no way out.

Unless she does the unthinkable....

What listeners say about The Companion Series: Books 1-3

amazing book which the narrators bring to life. you will be immersed into a world or companions, love and war . . highly recommended

Story is well written and interesting, but I didn’t like the ending for a couple of reasons. Mainly, I’m just not thrilled about the author’s lack of addressing the wrongness of a major underlying theme and ....

... they don’t even try to end sex trafficking, because that’s exactly what it is. In fact they rationalize it as ok! That it’s the women’s choice - not really. It’s never even attempted to stop it by the end of book 3. Only when it’s done in a way that the kingdom doesn’t get their share of the money do they do anything, and that’s just to regain their cut of the profits. Apparently there are two more books, but with different main characters, but based upon the descriptions, it’s only the last book that questions if this form of slavery is ok. I haven’t listened to those two yet, so I don’t know if they manage to end the Companion system, but it seems unlikely to manage in the length of only one book.

Tanya Bird is a talented storyteller.These books captured my attention from the first page to the last.She takes you on a gripping and at times, heartbreaking journey.