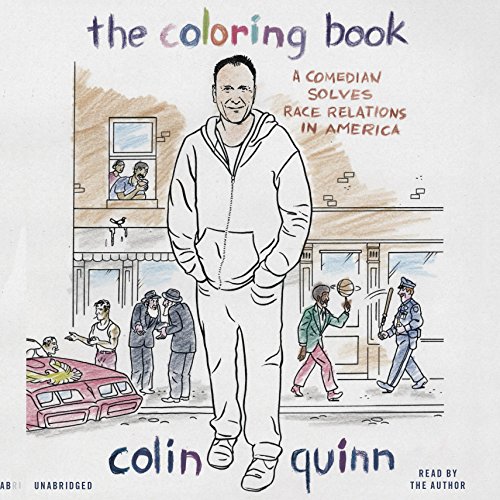 Colin Quinn has noticed a trend during his decades on the road - that Americans' increasing political correctness and sensitivity have forced us to tiptoe around the subjects of race and ethnicity altogether. Colin wants to know: What are we all so afraid of? Every ethnic group has differences, everyone brings something different to the table, and this diversity should be celebrated, not denied. So why has acknowledging these cultural differences become so taboo?

In The Coloring Book, Colin, a native New Yorker, tackles this issue head-on while taking us on a trip through the insane melting pot of 1970s Brooklyn, the many, many dive bars of 1980s Manhattan, the comedy scene of the 1990s, and post-9/11 America. He mixes his incredibly candid and hilarious personal experiences with no-holds-barred observations to definitively decide, at least in his own mind, which stereotypes are funny, which stereotypes are based on truths, which have become totally distorted over time, and which are actually offensive to each group and why.

As it pokes holes in the tapestry of fear that has overtaken discussions about race, The Coloring Book serves as an antidote to our paralysis when it comes to laughing at ourselves...and others.

What listeners say about The Coloring Book

Would you listen to The Coloring Book again? Why?

I've already listened to it twice

What other book might you compare The Coloring Book to, and why?

The Last Chapter and Conclusion

you know the type that thinks he knows ...poor

The author gets it wrong. I'll sum it up. Does not respect black people and is scared of Jewish power in the entertainment business. Don't waste your money. Author is an uninformed idiot and with racist views and doesn't know it

I like the way that Colin presents this is a commentary on political correctness and yet he still frozen several personal anecdotes where this easily could have been his biography.

If you know and understand Colin and if you ever watch tough crowd and enjoyed it you will enjoy this.

I absolutely loved this book. Colin delivered a beautifully written, incisive, hilarious audio-book. So happy he read it because his distinctive speaking voice significantly adds to the experience. It was like hanging out with him without anyone to interrupt. 5 Stars All Around! Only wish it were longer.

Colin Quinn is brilliant and this book shows it. If you loved his one man show then you will love this book! Part memoir, part study of New York City and current events without getting overtly political. Colin Quinn really might be the best man in America to have a discussion about race.

a hilarious take on culture

Collin Quinn is great at telling a story and confronting the truth of cultural relations. I highly recommend this book. it had me laughing from beginning to end.

Colin needs to work in his reading skills, but overall this is a great book! Hilarious stories! He manages to be funny and edgy about race without crossing that dreaded PC line. Great job Colin!

Mandatory reading for all Generation Gleers.

If you look past the terrible book cover, past the god awful book name and actually read this book you will come away extremely happy. The book is funny, it's smart and it's real. Colin is doing the nation a service with this book and I truly feel 88% of our face issues could be solved in just days by making kids in high school read this.

Again super enjoyable read - no matter your politics you will love this. Well unless you're a jerkoff.

I didn't read the description of this book carefully enough. It really is just a stand-up comedy routine which is not my thing. When it said "a comedian takes on race" I thought it might be 70%, comedy and 30% insight. It was more like 99 and 1.

Despite having the grating voice of a 50 year chain smoker gargling with shards of glass, Colin Quinn's (CQ as he prefers to be called affectionately by his dozens of fans) audio performance warms the heart, soothes the soul, and inspires the mind.

After listening intently in my car while driving around the ethnic part of town, I really feel like he helped me to "get it" as the hip, in-the-know types refer to understanding PoC (this abbreviation means 'persons of color') and now, thanks to CQ ;) I aspire to meet some Haitians.

Colin Quinn is not just a Renaissance Man to me, no. After listening to his charming stories about Chinese work ethic and Jamaicans bedding white women, I feel like he's a Renaissance Friend.

When did Colin Quinn get so smart?!

This is just a great book that takes you through Collin Quinn's life growing up in New York. It is by no means PC, but it is intelligent, historic and absolutely hilarious. I can't lie, often feels like it's walking the fine line between racism and social commentary, and at times it feels like it's going to fall off the deep end, but I think that's part of the suspense of the book. The first time listening to this I was subconsciously waiting for Quinn to say something horribly offensive so I could go tweet about it, it didn't happen. It was actually a really delightful story about a time in one of the greatest cities of the world that can only be remembered by stories like this. I think it's a great read, it's probably better as an audiobook than as a physical book. I find that the cadence of Quinn's voice is integral to this story and commentary, and I loved every second of it.

Entertaining and refreshing take on our PC Society

Listened in a day. We need more commentary and guidance like this in today's world of "never offend anyone "

So Much Wrong With This Listen--Bah Humbug

I do like comedy, comedians, and sometimes I go to comedy clubs. My mother and all her family were from Brooklyn. I grew up in NY. So how could I not enjoy this book by a Brooklyn-born Irish comic?

I didn't find Quinn very funny and only got a few chuckles here and there. His delivery was stagnant--dull and monotone with no expression or pauses. After about an hour and a half, his true agenda became obvious. While he did a routine on his beliefs about racial characteristics based on his early experiences as a kid in Brooklyn, he really just wanted to reminisce and brag about his early years and misadventures in Brooklyn, in actuality enlightening us on how degenerate and disgusting he was. For some reason, he apparently believes/d he is/was quite the stud, writer, comedian, poet as he kept repeating this over and over. He also degenerated into sub-foul language (you will see from my other reviews that language has never been an issue for me.)

I guess if I had found his misadventures funny, I might have kept listening. But I didn't. I left at the 3 hour mark. Life is too precious for two more hours wasted on this stuff.