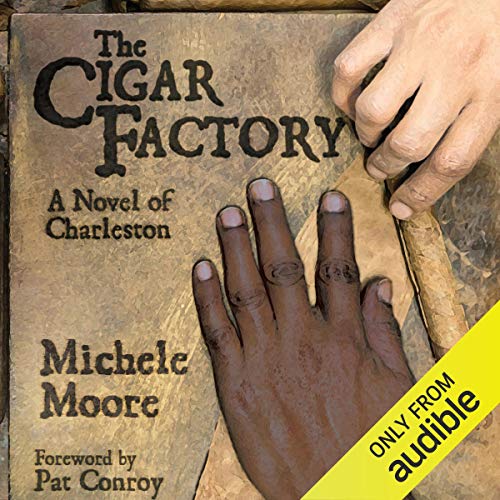 A Novel of Charleston
By: Michele Moore
Narrated by: Robin Miles
Length: 12 hrs and 7 mins
Categories: Fiction, Literary
3 out of 5 stars 3.0 (2 ratings)

"The sun leaned for down bringing shade to the waterfront," begins Michele Moore's entrancing debut novel, harkening back to an era when the legendary fishermen of Charleston's Mosquito Fleet rowed miles offshore for their daily catch.

With evocative dialect and remarkable prose, The Cigar Factory tells the story of two entwined families, both devout Catholics - the white McGonegals and the African American Ravenels - in the storied port city of Charleston, South Carolina, during the World Wars. Moore's novel follows the parallel lives of family matriarchs working on segregated floors of the massive Charleston cigar factory, where white and black workers remain divided and misinformed about the duties and treatment received by each other.

Cassie McGonegal and her niece, Brigid, work upstairs in the factory rolling cigars by hand. Meliah Amey Ravenel works in the basement, where she stems the tobacco. While both white and black workers suffer in the harsh working conditions of the factory and both endure the sexual harassment of the foremen, segregation keeps them from recognizing their common plight until the Tobacco Workers Strike of 1945. Through the experience of a brutal picket line, the two women come to realize how much they stand to gain by joining forces, creating a powerful moment in labor history that gives rise to the civil rights anthem "We Shall Overcome".

Moore's extensive historical research included interviews with her own family members who worked at the cigar factory, adding a layer of nuance and authenticity to her empowering story of families and friendships forged through struggle, loss, and redemption.

What made the experience of listening to The Cigar Factory the most enjoyable?

The uniqueness of the story.

She obviously has a great interest in the subject; her enthusiasm for the characters comes through and her command of the accents and language required is excellent. She also has perfect diction.

The early 1900s seen from a different perspective.

The uniqueness of the subject matter opens the listener's thoughts to a whole new universe and what you thought you knew about racism and the inequality of that time might be challenged...

A Tale of Two Charlestons

Two families sharing common language, workplace and folkways, yet separated by race. "Cigar Factory" illustrates the psychological and social boundaries of poor whites and poor blacks. It portrays the opportunities that would come (and did come) from recognizing a potential ally. I loved seeing into a lost world in this well-researched book.

If Charleston's culture is rooted in its language Robin Miles takes you in deep. I had the feeling she relished the chance to take on the Gullah inflected english for the length of an entire book. Although the story is often dark, her performance is joyful. A virtuoso given a particularly complicated piece. She makes Charleston sing and effortlessly becomes the story.

If you could sum up The Cigar Factory in three words, what would they be?

Have you listened to any of Robin Miles’s other performances before? How does this one compare?

Haven't listened to others, but she,was spot on with her lowcountry accents. I think it made the book so much more enjoyable to listen to her read it rather than sitting down to read it. I loved it!

yes..wont say which parts because I don't want to give it away, but cried several times.

I've lived in CHARLESTON the past 20 years and the story thread is true to the City, I learned a lot!

The dialogue is an experience appreciated! I'll always tell people about it. Thanks to the author!!!😀

Where does The Cigar Factory rank among all the audiobooks you’ve listened to so far?

Among the best. As a frequent visitor to Charleston, with family members who live there, this book was accurate historically and geographically, compelling in its story line and outstanding in the performance

Both Meliah Amey and Cassie were compelling. But one of my husband's relatives, Judge Waring, is my favorite character

What does Robin Miles bring to the story that you wouldn’t experience if you just read the book?

The sounds of old Charleston: I was unaware that gullah was as widely spoken as it was in the early 1900s. Robin thoroughly transported me back in time. It was excellent

The hair stood up on the back of my neck for most of the story...it was that well performed and that believable

I highly recommend this book to anyone

I do not unde6rstand the voice of an Irish immigrant sounding the same as the black Gullah characters.

Bridges that join people and time

Water under the bridge of time shows how far we have come. We still need change, the brave characters, strong men and women with faith and determination took small steps to raise their family to be better than themselves. They were both poor, considered lower class, and felt like they were different, but had many similarities. loved the book. the writing and narration wonderful. I can't wait to go to Charleston, and I may have me a cigar.

Great story, very informative. The author was able to tell the same story from two perspective where the characters intertwined for a great and positive ending.

Which character – as performed by Robin Miles – was your favorite?

My favorite character was Aunt Cassie

It made me angry that the factory owners and managers were so insensitive.

What disappointed you about The Cigar Factory?

I was expecting a riveting story about the deplorable conditions under which these women lived......but the story was painstakinglyy slow.....could not get into it....stopped listening about one third of the way thru....

Would you ever listen to anything by Michele Moore again?

No. the accents were all the same....language was difficult to understand