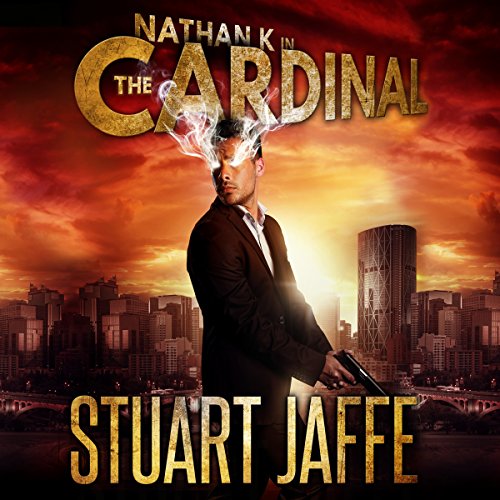 Nathan K - he can hold two souls in his body. If he dies, he loses one yet lives on with the other. As long as he replenishes his second soul, he cannot be killed. Nathan K is immortal.

In the world of the Immortals, none is more feared than The Cardinal - a vicious, insane man with a thirst for destruction. And now, he has turned his eye upon Nathan. For the Cardinal, hunting Nathan may be nothing more than a game, but, for Nathan, it is a life and death pursuit. He will have to rely on trusted friends and questionable enemies as he races to uncover the reason behind the Cardinal's deadly attacks. If he can't find the answers, Nathan won't have any hope of stopping the Cardinal. But when your enemy is insane, the answers could be insane, too.

What listeners say about The Cardinal

love the idea of the story, but not the story

I really like the concept and idea of it, but the language and actual righting of the story didn't seem to fit or was a little cheesy, the main character is extremely naive and goody two shoes to the point of annoyance. The dialogue and language between the characters was off, as if every character in the book had Asperger's and was incapable of expressing any type of emotion, even when specifically expressing an emotion. It's hard to describe.

The Cardinal is a nice addition to the Nathan K Series. Bringing more life into one of the most mysterious and scary characters we've witnessed to date.

I enjoy Mr Jaffe’s books; I have all the Max Porter and all the Nathan K novels so far. Mr Jaffe is one of the VERY few authors I like to hear narrate his own books. If he ever stops writing, he can switch, without missing a beat, to just narrating for a living. I grew up in Florida and currently live in North Carolina, so many of the place names and references are pleasantly familiar. They help me visualize the events in these two series.

The Nathan K series starts with a guy (Nathan) in the wrong place at the wrong time. He is brought into the world of Immortals and trained by a group who want him to perform various tasks and jobs for them. The Immortals are disdainful of normal humans, but Nate wants to help people. This causes conflict between Nate and the various factions of the Immortals. He escapes from the groups trying to control him after having received minimal training and with minimal understanding of the broader Immortal society. He ends up in direct conflict with the Cardinal, who is one of the original members of this society and who is as different from other Immortals as the Immortals are from normal humans.

Both the Max Porter set and the Nathan K set are pretty clean as far as sex scenes and language, something I appreciate. The second and third Nathan K books have some mild nudity/sex described but nothing too explicit and nothing I found offensive. These were in the context of setting up Nate’s involvement with a couple female characters. As a parent, I would not have minded teens sixteen and older reading them.

All in all, these are pleasant light listening for helping to pass the time while driving or doing chores. So far, my intention is to buy all books that may come out in these two series in the future. The main characters are likeable overall, though Nate must struggle to retain his humanity.