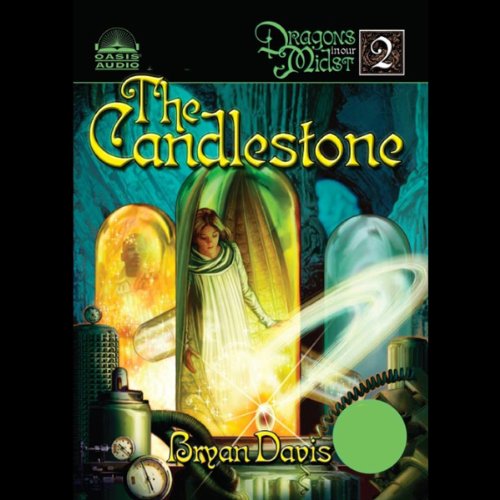 The Candlestone is the second volume in the contemporary fantasy series Dragons in Our Midst by Bryan Davis. This series inspires young people to pursue faith, courage, and love, and to dig deep within to find their God-given strengths, no matter how difficult the circumstances. The first book, Raising Dragons, plunged two teenagers, Billy Bannister and Bonnie Silver, into mind-boggling mysteries, life or death pursuits, and deadly sword-to-sword battles.

In The Candlestone, a mysterious book leads Billy into mortal combat with a powerful dragon slayer. Separated from his friends and finding his dragon traits useless against this enemy, he has to rely on new weapons, a sword and shield he cannot even see. A scientist lures Bonnie to his laboratory with amazing news--her mother is still alive! And he should know; he's her long-lost father. He has learned the secret of long life--dragon blood, and he wants Bonnie to help him with his experiments. But first he must send her to retrieve her mother from the Candlestone, a strange paralyzing gem that absorbs light and with it the strength of dragons and their offspring.

The Candlestone is also a prison that captures people who have been transformed into light energy by Excalibur, King Author's great sword. When Bonnie enters the stone, she learns that many disembodied souls have fallen prey to the gem's powers, but no one has ever escaped. Her only hope is for Billy to overcome the dragon slayer and find a way into the candlestone, and, more importantly, a way out. Billy and Bonnie face their greatest fears, and they learn to use their strengths, both innate and newly found. They battle powerful enemies, ancient fiends from times long past, and the horrors of the blackest of prisons, captivity with the walls of unearthly darkness, the crystalline tomb of The Candlestone.

What listeners say about The Candlestone

didnt want to stop listening until it was done

had to shut my husband up quite often. but then i was sad when it ended

Love this book series!!! I can hardly wait to listen to the next book! Happy listener!

A lot of fun

I haven't had this much fun listening to a story in ages. I'm not a religious person by any stretch. Well, I suppose that's not entirely true, but I do like how this story tells such a fantastic story without it being too dedicated to that religion. I highly recommend it.

The kids act way too proper. The characters say the right thing every time. Not like real teens at all. It is almost like a conversation was recorded, then phasing changed so that everyone said just right thing. Way too over thought. The voices sound lieKen they are sitting around a table reading a script. Which they are, but you usually can’t tell.

Would you ever listen to anything by Bryan Davis again?

Was The Candlestone worth the listening time?

I am returning it with out getting past chapter 8