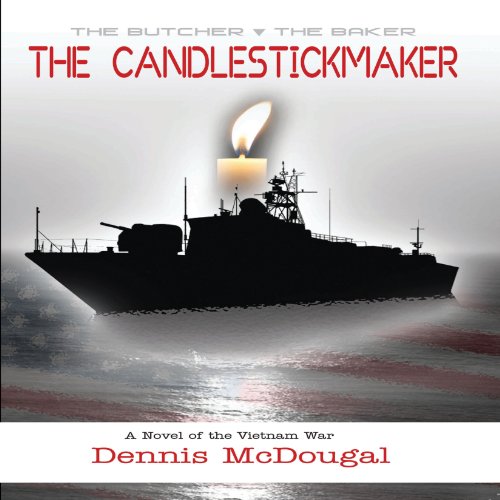 Aboard the spy ship U.S.S. Argosy in the war-tossed waters off the coast of Vietnam, three young American sailors form an unlikely bond. Each has fled an America they were raised to love but somehow no longer understand. When forced to choose whether to face combat or stay and fight the war in the streets, they sign up for a war that reflects the conflict that raged inside each of them. The one thing of which they were certain was that the only people in the world they could depend on were each other.

As their friendship deepens in the bars and brothels from Hong Kong to Subic Bay, Ernie Brigham and his companions slowly become aware of a dark secret aboard the U.S.S. Argosy. Upon their return to the America they left behind, they are changed at best, lost and damaged at worst, but ultimately sobered by a war that never should have been fought.

In the tradition of Tim O'Brien's The Things They Carried, Denis Johnson's Tree of Smoke, and Philip Caputo's A Rumor of War, The Candlestickmaker recalls a Vietnam that seared disenchantment into a post-World War II generation who learned to question authority at all levels. A coming-of-age story bookended by revelations that shatter readers' illusions about patriotism, government, and the nature of modern warfare, The Candlestickmaker takes listeners on a voyage that will guarantee they never read the Mother Goose nursery rhyme to their children in quite the same way again.