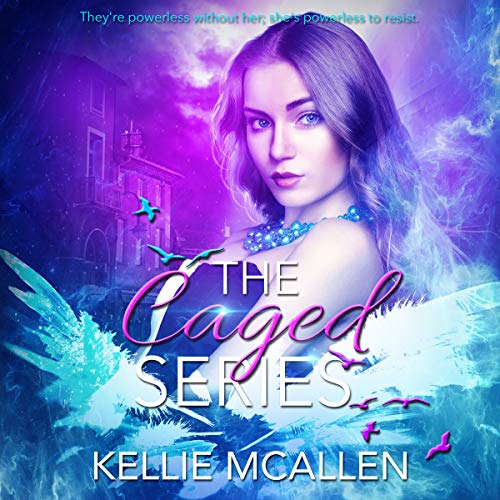 By: Kellie McAllen
Narrated by: Heather Taylor
Try for £0.00

They're powerless without her; she's powerless to resist.

The list of reasons why Lexus Wren is the last girl any guy would be interested in is mercilessly long: Her dad’s in prison for murder, her mom drowns her sorrows every night at Dave’s Dive, and Lexus is just trying to survive the cruelties of high school as a painfully shy bookworm with a bad wardrobe and a collection of nervous habits. Never in a million years did Lexus expect to draw the eyes of two hunky transfer students, Phoenix and Griffin Easton.

The troubled brothers are haunted by their own demons and don’t seem bothered by Lexus’ tarnished reputation. They’re too busy trying to figure out why touching her makes them feel like electricity is frying their insides.

After the truth about their powerful connection is revealed in an explosive confrontation, Lexus discovers that she’s a powerful Catalyst, capable of controlling Conduits like the twins with a single thought. She and the twins are offered a chance to enroll in a school for “Special” students. But Lexus soon learns that her powers are greater than she ever imagined, and the twins aren’t the only ones who crave her touch.

When the teens suspect a conspiracy behind the disappearance of several powerful Specials, including their parents, they must work together with their greatest enemy to uncover the truth. But whom can they trust when the people meant to protect them are also the most likely suspects?

If you like young adult paranormal romance books by authors such as CL Stone, BL Brunnemer, Amy Bartol, or JL Weil, you'll love The Caged Series!

This is a reverse harem paranormal romance series appropriate for ages 13+.

The plot itself is amazing, I really enjoyed the story and the Narrator's voice suited the story really well also.
One thing about the plot that I find unsettling is that by the end of the series the main character has three boyfriends!
Whilst I love love triangle and etc. but all of them becoming her boyfriends (or sharing her as their girlfriend) is just a bit too much if you ask me.

I really enjoy this book! Love the characters and Heather did a great job at narrating.

Another brilliant series to lose yourself in! Can't recommend enough that you read/listen to any of this author's excellent books!

Listened through, teen group romance with xmen vibes thrown in. Not worth the recommendation. Thanks.

Entertaining but not appropriate for target audience

The Caged Series is an entertaining set of books, but it is flawed. The biggest issue is that this is a teen romance that is inappropriate for teen readers because of graphic sex scenes with multiple partners and graphic violence. Some readers and listeners will love these books, but even though the books are aimed at a YA audience, I'd recommend mature audiences only.

The other issue I had with the series was the main character, who is suppose to be the smartest kid in school, speaks with bad grammar.

Regardless of the flaws, the books were interesting enough that I finished the series.

The narrator has a pleasant and clear voice, but she does not do male voices, and she is not very good at differentiating the characters.

I like when my family reads a book aloud and that is what this narrator reminds me of, but news flash — this book isn’t being read to me by family. It’s a paid experience, which means I have a base level expectation that exceeds what my little sister can do.

I’m a little confused as to why Jaxson didn’t get much time with Lexus, but whatever. I’m just glad that monotone New York accented narrator finally finished.

the narrator really needs a new mic and recording setup as sound quality was extremely poor. The narrator also struggles with a very small vocal range which leads to the same voice being used for all the characters which makes keeping up with the characters and story extremely difficult. I will be requesting a refund as soon as possible.

Not sure if the story itself is good.

I couldn't make it passed chapter 2. Narrator sounded so depressed. Not my cup of tea.

The sound on this one seems like it was recorded from a can. Also the story’s didn’t keep my attention. This is the first series I don’t care enough to finish.

I had been handed the author intriguing romantic drama with a flair of rebellion.

The person reading is doing well, but the audio quality is awful. It sounds like she is reading under .water

this story was a no from the second I started playing! the sound quality us poor and the reader does not draw me in at all!!

characters to young for me

I was not able to finish. characters just to young for me. Story would be good if they were not 15 and 16 year olds.

I loved this book so different from what I normally ready. A teen romance. Phoenix the protector,Griffin the lover and Jackson the rebel. Come together perfectly to protect The Shy and timid Lex. Who in the end becomes her own.

I would definitely recommend this book for readers that believe in young love and first loves.