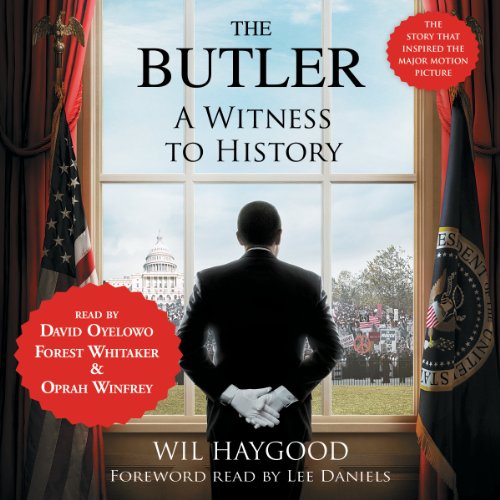 The story that inspired the major motion picture...read by its stars David Oyelowo, Forest Whitaker, and Oprah Winfrey

When acclaimed Washington Post writer Wil Haygood had an early hunch that Obama would win the 2008 election, he thought he'd highlight the singular moment by exploring the life of someone who had come of age when segregation was so embedded in the culture as to make the very thought of a black president inconceivable. He struck gold when he tracked down Eugene Allen, a butler who had served eight presidents, from Harry Truman to Ronald Reagan.

Forest Whitaker narrates the story of this remarkable man who, while serving tea and supervising buffets, was also a witness to history as decisions about America's most momentous events were being made.

With a foreword by the Academy Award-nominated director Lee Daniels, The Butler also includes Wil Haygood's essay exploring the history of black images on celluloid and in Hollywood, read here by David Oyelowo and Oprah Winfrey.

If it was the story of Eugene and not the ad lib from the other narrators.

Would you be willing to try another book from Wil Haygood? Why or why not?

I was expecting a story about Eugene and his experiences, not all the added after the fact.

I loved hearing about Eugene and his wife.

Could have been a little more about Eugene and his experiences rather than about how we now have a black president and look where we are now. Not that I'm against the "look where we are now", it's just that I wanted to hear about events that took place during his time working in the White House. Maybe because I saw the advertisement for the movie, my expectations of the book were higher. It was this advertisement that got me interested in the book.

Someone who is interested in the history of African Americans in cinema.

What could Wil Haygood have done to make this a more enjoyable book for you?

Told more of the story of Eugene Allen.

Did the narrators do a good job differentiating all the characters? How?

I did like the narration in the first hour of the book.

I was very disappointed. I imagined that the film, "The Butler" would be based on this book, so I wanted to hear the book first. In truth, the book is only an advertisement for the film! I have purchased other books from Audible that I wasn't crazy about, but this is the first time that I've ever felt ripped off.

I expected this book to be a biography of Eugene Allen, butler in the White House. The first hour of the book is about the author's attempt to find and interview Mr. Allen, and does include a few stories about Mr. Allen and his wife. A little over one half of the book has nothing to do with Mr. Allen. It is all about the history of African Americans in movie-making history. I did not buy this book to hear about Denzel Washington being nominated for an Oscar, I bought it to hear about the butler, Eugene Allen.

I like to read books before the movies come out, so when I saw that there was a “Butler” book I snatched it up.

I’m disappointed because it turns out that this is not the story of the Butler, but rather the story of the Movie! Did the publisher’s summary say so and I missed the warning? It was just advertizing for the film.

I prefer these kinds of thing as special features in a DVD; I regret this purchase.

It was OK but not what I expected

Would you recommend The Butler to your friends? Why or why not?

I am not sure? I bought the book because I thought I would hear what the butler thought about the different presidents he served under or maybe his take on different events that happened while he was a butler, but that isn't what the book is about. The book is more of a narrative on Africa American history in the United States than about the white house.

I feel as if this book was an expensive advertisement to get people to go see the film and it worked because I want to see the movie.

The most deceiving book I've bought

Would you try another book from Wil Haygood and/or the narrators?

This is just a commercial for the movie. Nothing to this audiobook. Don't waste your money!

Would you ever listen to anything by Wil Haygood again?

Yeah, I will like the movie, but not this commercial.

I have over 500 books in my audible library. This has to rate amongst the worst. The title is a total misrepresentation. It was nothing about the life and times of the butler as described.

It had no coherence and I had no idea what the relevance of most of it was to the title.

A REALLY BAD listen. The only redeeming feature was the narration, (not Forest Whitaker who speaks so slowly I had to put it on 1 1/4 speed).

An appalling waste of two hours of my life. I will never buy anything from this 'author' again. I am asking for my money back.

Well Served by this Book

On November 4, 2008, Barack Obama was elected to his first term as President. Three days later, I read a nice piece in the Washington Post by Wil Haygood. "A Butler Well Served by this Election" was the too brief story of Eugene Allen, a Black butler who served eight presidents, retiring during the Reagan administration. Later, watching the inaugural on television, the camera panned to Allen, and a commentator mentioned he was there as a special guest of the President's. Allen must have had interesting stories, but he was discrete and I thought they had died with him in 2010.

I was thrilled to find "The Butler: A Witness to History" (2013) at the top of the Audible crawl. "Wow," I thought. "A story I always wanted to hear more of, and one of the narrators is Forest Whitaker!" I like his voice so much I'd listen to him reading a refrigerator repair manual. It was the fastest Audible purchase I've made, and I don't regret it.

I thought I would be listening to a lengthier biography of Allen, or perhaps a novelization of the movie, but "The Butler" book is really a companion to the movie. According to this book, the movie "The Butler" is partially fictionalized, and a dramatic conflict was created between Allen and a radicalized son. This book first discusses how Haygood came up with the original story idea, and his lovely interviews with Allen and his wife, Helene. The book discusses Allen's relationships with the presidents he served, but briefly -it's a short book. It also discusses the tragedy Allen honored to vote for Obama, and then his physical struggle to attend the inauguration.

There's also a section on the difficulty bringing "The Butler" to the screen. Oprah Winfrey discusses the history of Blacks in film, as actors, directors and producers. I am familiar with all of the actors she mentioned, but the directors in the 1920's and 30's were new to me.

I'm giving the book a story rating of "3" because, as an Audible, it wandered. I wasn't always sure what point was being raised.

[If you found this review helpful, please let me know by clicking 'helpful'.]

Not a novel, but just a trailer for the movie. Minimally expanded from the original Washington Post article with add-ons from Hollywood.

A look into the black experience

This book is short but I wish there was more information about Eugene Allen and his wife Helene, I feel this book was provided was almost a teaser for the movie. I enjoyed Oprah Winifrey's part about the history of blacks in the entertainment business. I wish this book was longer and an in-depth story of Allen but guess I will have to wait for the movie. The book did convey the feelings of the black people in voting and seeing a black man in the white house. The narrators did an excellent job. I was surprised that it was the Reagan's that invited Allen and his wife as guest to a state dinner. Overall this was an interesting and enjoyable short story.

not what I expected out of a "book"

If it was an actual book about the Butler, instead of the story behind the movie.

Its not a book, but a behind the scenes, how we made the movie. Its a good story, but not a book like what you'd expect. More of a documentary.