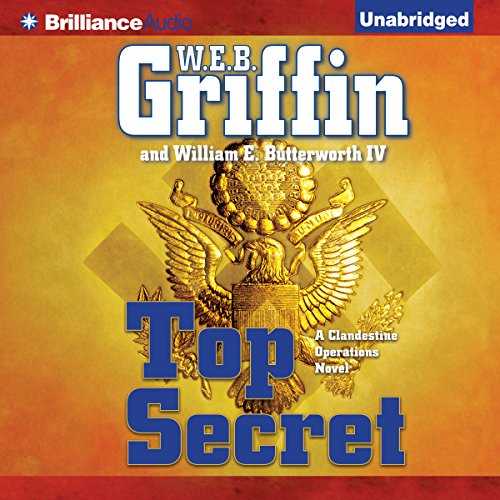 By: W. E. B. Griffin
Narrated by: Alexander Cendese

From the #1 New York Times bestselling author, a brand-new series about the Cold War - and a different breed of warrior.

In the first weeks after World War II, a squeaky-clean new second lieutenant named James D. Cronley Jr. is spotted and recruited for a new enterprise that will eventually be transformed into something called the CIA. One war may have ended, but another one has already begun, against an enemy that is bigger, smarter, and more vicious: The Soviet Union.

The Soviets have hit the ground running, and Cronley's job is to help frustrate them, harass them, and spy on them any way he can. His recruiter thinks he has the potential to become an asset - though, of course, he could also screw up spectacularly. And in his first assignment, it looks like that's exactly what might happen. He's got seven days to extract a vital piece of information from a Soviet agent, but Cronley's managed to rile up his superior officers (he seems to have a talent for it), and if he fails, it could be one of the shortest intelligence careers in history.

There are enemies everywhere - and, as Cronley is about to find out, some of them even wear the same uniform he does.

Would you try another book from W.E.B. Griffin and William E. Butterworth and/or Alexander Cendese?

I don't think so

I love WEB Griffin books. I hated this one. The story was poor and the narration was simply awful. It was hours and hours of listening to a story of what happened in prior books.

This is book one of the Clandestine Operation Series. It appears Griffin is launching this series off the Argentine or Honor Bound Series. Griffin’s sketch of the immediate post-WWII bureaucratic territorial clashes has purpose; it’s an outline of how the demobilized OSS hot-war heroes become CIA cold warriors. The main Character is James D. Cronley Jr. In the book the lead characters have to fight the FBI, the Russians and other to get their job done. Cronley and his men are OSS waiting to be transferred to the newly created CIA. Captain Cronley is in charge of obtaining the German Spies that were in Russia away from being captured by the Russian KBG and turn them into working for the CIA.

General Reinhardt Gehian, Chief of Eastern Front intelligence was a Wehrmacht General, Gehian and his men started to work for the OSS near the end of the war. He later became Chief of West German Intelligence in the 1950s. This is what I like about W.E.B. Griffin books; he places his fictional people into the real history he is writing about.

Cronley has General Gehian and his men in an isolated Bavarian monastery while a new facility is being built for the CIA. The narrative’s ripe with meetings, confrontations, lies, subterfuge rather than fighting and gunplay, a change from the usual Griffin story. The dialogue is classic Griffin. The story is fast-paced, lots of interesting plot twists.

I did not particularly care for the narrator Alexander Cendese. He pronounced some of the Spanish words incorrectly. I am not as familiar with German to know how he did with those words. The majority of Griffins books have been narrated by three great narrators of action books, Scott Brick, Dick Hill and David Colacci. I hope the publisher will return to one of these narrators for future books in this series.

What would have made Top Secret better?

More action would have made the Top Secret plot more interesting.

What could W.E.B. Griffin and William E. Butterworth have done to make this a more enjoyable book for you?

Repeating the the Honor Bound story line was boring, but typical of most of the W.E.B. Griffin books.

Disappointing compared to Dick Hill who performed the Honor Bound and Men at War series.

The book carries forward the Honor Bound story line, which I enjoyed.

The quality of Griffin's books have declined since W.E.B. IV began co-authoring the books. I suspect he writes most the recent W.E.B. Griffin books.

What disappointed you about Top Secret?

Rating is for audio version only. Voice booms, voice characterization is weak, clarity is difficult to catch. Great story otherwise.

Unable & or unwilling to listen

I have been an avid listener of most if not all of Griffin's series of books. Unfortunately, I am unwilling to listen past the 44 minute mark of this one due to the new narrator. I don't mean to be a hater, but the voices he does for various characters are really irritating. The voice for the young woman in the story is best described as "Valley Girl" speak.

Your mileage may vary.

not up to its' predecessors

This is a sequel to the honor bound series. Unfortunately, there are too many inconsistencies to those who read / listened to the previous series. The narration is ok, but not up to the original. All in all, an ok listen, but a bit disappointing

The narrator has obviously never been in the Army

Nope. Pretty much saw everything coming down the pike...

Anytime the characters interacted with one another it was like they were always yelling at each other. Normal everyday conversation doesn't have people speaking with constant intensity. Please...Go back to Scott Brick.

As with most Griffin books, the fact that he feels the need to recap what happened in every other book before in the series gets quite monotonous. I sear, it seems like a large part of it was dedicated to bringing evryone up to speed on what happened from the very beginning.

Plot confusing and voices are distracting.

What disappointed you about Top Secret?

The story is hard to follow and the voices are too distracting.

What was most disappointing about W.E.B. Griffin and William E. Butterworth ’s story?

Would you be willing to try another one of Alexander Cendese’s performances?

Waste of money and time.

No. Should have just read the book !

If you’ve listened to books by W.E.B. Griffin and William E. Butterworth before, how does this one compare?

The book is probably better than I gave it,I just can't get past the narrator !!!!! Need to go back with Dick Hill or Scott Brick !!!

Rerun over a retread over a weak character

What was most disappointing about W.E.B. Griffin and William E. Butterworth ’s story?

Some very large percentage of the book is re-hashing story lines and characters from previous books. Very little that could not have been read in < 50 pages. The amount of profanity is unnecessary and does not add "punch" to the dialog or toughen up the characters.

What aspect of Alexander Cendese’s performance would you have changed?

Given the material to work with, Cendese's performance was not to blame for the low rating.

After mailing in the last two books, I will be hard pressed to purchase any more WEB and son novels.