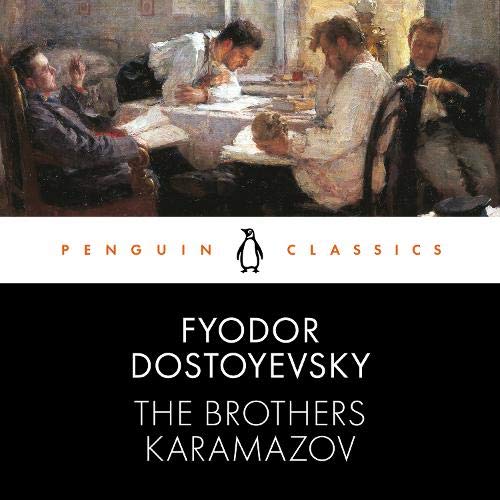 The murder of brutal landowner Fyodor Karamazov changes the lives of his sons irrevocably: Mitya, the sensualist, whose bitter rivalry with his father immediately places him under suspicion for parricide; Ivan, the intellectual, driven to breakdown; the spiritual Alyosha, who tries to heal the family's rifts; and the shadowy figure of their bastard half-brother, Smerdyakov. Dostoyevsky's dark masterwork evokes a world where the lines between innocence and corruption, good and evil, blur and everyone's faith in humanity is tested.

Translated with an introduction and notes by David McDuff.

"The most magnificent novel ever written." (Sigmund Freud)

What listeners say about The Brothers Karamazov

WOW is Luke Thompson’s narration amazing! He’s the most underrated actor ever!!! I don’t know how someone can do so many hours of work and sound consistent through all of it. Please keep going!

The book is of course a masterpiece which I have read four times and gained something on each reading. What stands out here is the reader's superb delivery and range of voices.

Fix an error near the end of chapter 7.

The text repeats and overlaps. I've listened to the section twice and I'm convinced it is an error in editing, not in the audio player.

This is a newer release and didn't have many reviews when I chose it, but after sampling the Luke Thompson narration it seemed promising. Which translation to choose for The Brothers Karamazov is a subject of debate, but the McDuff translation is good and well suited to an audio performance. I had been meaning to go back to this book for years and this made it so much more accessible than any version I had tried. Thank you!

Had really great moments that made it worth it.

Most of the novel is tedious, it's so hard to follow the long winded dialogue between the various characters, sometimes it seems they just mumble on about nothing but maybe I'm just dumb I don't know; BUT THEN, you are all of a sudden smacked in the face by a beautiful and amazing 40 minutes that make you cry and clap at the end. there are about 5 parts of the book that made me cry the literature was so good. Elder zosima memoir, The Grand Inquisitor, alyosha's epiphany after zosimas death, Ivan's conversation with the devil, and the funeral at the end, all made me clap for joy at the end of these parts. The trial was dramatic but the two speeches flew right over my head I couldn't keep up.

the whole novel is worth listening to just to get to these parts. I look forward to watching some YouTube videos/lectures that unpack this one for me a little bit, I most definitely had trouble, just be warned it's a good read and it should keep you all 40 hours but it is not a casual read there is a lot to unpack.

This feels like the most important book I’ll ever read (or listen to), but some of the other narrations don’t do it justice. This guy is fantastic. One of those narrators that puts the character in voice: the depraved (yet somehow the most likable) father, the seamlessly honest youngest brother, the cold and lost middle, and the rash romantic oldest. He hits the notes really well and seemed to enjoy himself.

Fantastic job. Now I have another audible Dostoyevsky gem along with the Anthony Heald Crime and Punishment.

The Brothers Karamozov is a classic that the average reader will most likely struggle through because of its length and its complexity. That being said it is a shame because Dostoyevsky touches on so many areas that the modern reader should ponder. This is where Thompson's narration and McDuff's translation really helps. Thompson's narration is fantastic, brings the book to life, and will definitely help the reader through this book.