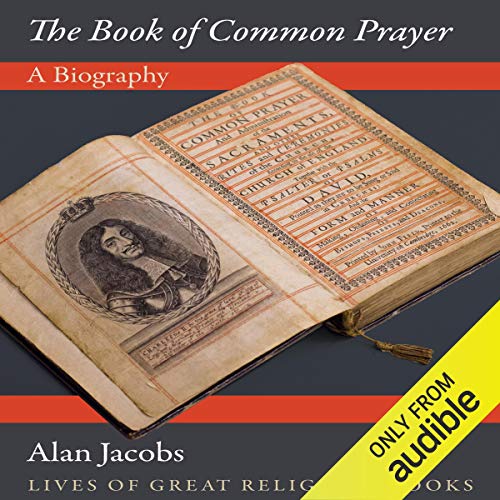 The Book of Common Prayer

By: Alan Jacobs
Narrated by: Robin Bloodworth
Try for £0.00

While many of us are familiar with such famous words as, "Dearly beloved, we are gathered together here. . ." or "Ashes to ashes, dust to dust," we may not know that they originated with The Book of Common Prayer, which first appeared in 1549.

Like the words of the King James Bible and Shakespeare, the language of this prayer book has saturated English culture and letters. Here Alan Jacobs tells its story. Jacobs shows how The Book of Common Prayer - from its beginnings as a means of social and political control in the England of Henry VIII to its worldwide presence today - became a venerable work whose cadences express the heart of religious life for many.

The book's chief maker, Thomas Cranmer, Archbishop of Canterbury, created it as the authoritative manual of Christian worship throughout England. But as Jacobs recounts, the book has had a variable and dramatic career in the complicated history of English church politics, and has been the focus of celebrations, protests, and even jail terms. As time passed, new forms of the book were made to suit the many English-speaking nations: first in Scotland, then in the new United States, and eventually wherever the British Empire extended its arm.

Over time, Cranmer's book was adapted for different preferences and purposes. Jacobs vividly demonstrates how one book became many - and how it has shaped the devotional lives of men and women across the globe.

What listeners say about The Book of Common Prayer

The historicity of the Christian faith and its adherents understanding of its Holy Scriptures' teachings are inexorably bound to the Book of Common Prayer. This account of the Book of Common Prayer's history is written with delightful prose and encapsulates the poetry of the moment. Required reading for anyone who wants to know the foundations of Anglicanism.

What made the experience of listening to The Book of Common Prayer the most enjoyable?

Alan Jacobs is clear, clever, and always interesting. He constantly finds the little detail or turn-of-phrase that makes the history come alive.

Did Robin Bloodworth do a good job differentiating all the characters? How?

This is pure history, without real characterization. The narration was somewhat mechanical, but it wasn't terribly distracting. The narrator didn't improve the experience, but his performance is no reason to avoid this excellent book.

This is a relatively brief history. It's neither scholarly nor comprehensive. It is, however, great fun with some penetrating insights. I used it in a book club at a my church, and it was the perfect fit for that audience.

One note on the audible vs. print versions: In this book, as in his previous ones, Alan Jacobs uses endnotes for substantial and often very interesting side comments. There isn't a very good way to convey these audio form, so they were simply left out of the audiobook. I had the print copy as well, so I just read them after chapter. But you are missing a bit of great content with the audiobook.

So much more to the story than I knew

A titillating taste of the richness that is liturgy. Concise but very informative and easy to follow. Sadly, peppered with annoying mispronunciations. The Latin was atrocious, like the narrator didn't notice he wasn't reading English.

Though reviews may claim of the written version, " Jacobs has an obvious affinity for the prayer book," you cannot tell from the audiobook performance. The narrator sounds both pompous and skeptical regarding the material of the text.

The Book of Common Prayer. It's been through a lot and is still relevant today.

Who would you have cast as narrator instead of Robin Bloodworth?

Kenneth Branagh, Alec Guiness, or perhaps anyone from the actual U.K. with a lick of respect for the subject of the book being read.

Did The Book of Common Prayer inspire you to do anything?

Yes. Read the text myself.

An audible waste of a good text.

This is a really great book for everyone interested in liturgy and it’s history. Realty enjoyed it.

I love Jacobs. I love the BCP. This was informative and thorough, and enjoyable.

a book that influenced other denominations

I'm a long time Episcopalian and have been interested in church history. There are the things I knew about and many I didn't know. Growth of Anglican church in India was a surprises.

Seems like a lot of the same info over and over. Single denomination mostly. What about Disciples? I must of missed it.