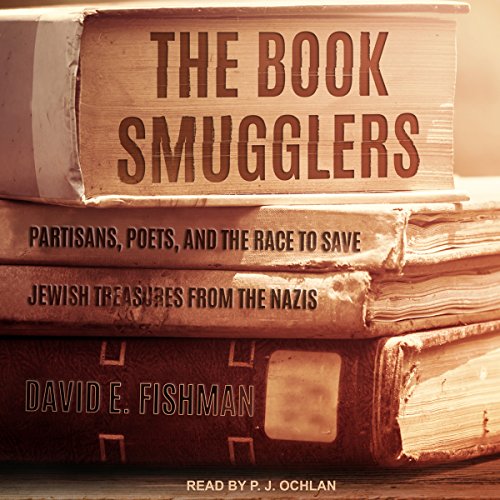 Partisans, Poets, and the Race to Save Jewish Treasures from the Nazis
By: David E. Fishman
Narrated by: P.J. Ochlan
Length: 11 hrs and 34 mins
Categories: History, 20th Century
5 out of 5 stars 5.0 (1 rating)

The Book Smugglers is the nearly unbelievable story of ghetto residents who rescued thousands of rare books and manuscripts - first from the Nazis and then from the Soviets - by hiding them on their bodies, burying them in bunkers, and smuggling them across borders. It is a tale of heroism and resistance, of friendship and romance, and of unwavering devotion-including the readiness to risk one's life - to literature and art.

And it is entirely true. Based on Jewish, German, and Soviet documents, including diaries, letters, memoirs, and the author's interviews with several of the story's participants, The Book Smugglers chronicles the daring activities of a group of poets turned partisans and scholars turned smugglers in Vilna, "The Jerusalem of Lithuania".

Magnificent Obsession to Save Jewish Culture

The Jews of the Vilna ghetto (now Vilnius, Lithuania) during the Nazi occupation had their own group of characters who served as a form of Monuments Men endeavoring to save their culture contained in manuscripts, various documents, religious items, and more from removal to Germany or destruction. The author masterfully tells about the poets and their friends who smuggled items to safe places to be found later only to find that the items had to be smuggled again from the grasp of the Soviet Union. Some of the poetry and lyrics for songs are incorporated into the story of the community. The holdings in the community were among 43 of the top libraries that Germany wanted to include in their master library. The character development and the personal stories make this an excellent book.

This book sheds light on a type of Jewish resistance and optimism during the Nazi occupation. Most people would not think of how important the books and other documents were during the WWII and later timeframe.

Read or listen to The Book Smugglers soon, maybe even read it again.

Big Reasons to Redefine What Belongs to Whom

I highly recommend this book both a timeless, placeless testament to cultural misappropriation and, additionally, to the specific story of tenacity and will during lifetimes of cultural wrongs. If you are not generally a reader of “Holocaust era” memoirs, be advised the lessons of minority cultures and their efforts to preserve their histories and cultures as regimes change, wars pass through, leaders issue foolish and shameful dictates, borders for legal entities alter, and power centers shift are not restricted to Jewish experience. Through the extremes, and this book provides extreme examples, we can create global policies for cultural rights. As an American raised in the diversity of southern California, I cannot comprehend and hope never to comprehend politics of exclusion and genocide. Our miscellanies give depth, interest, strength, and mutual relevance.

This is not a “spy thriller,” but anxiety rivers through the telling. The first few chapters do a gentle, slow launch of the book. As the book proceeds, you’ll hear great poetry, see images crafted with words long ago, sicken from the losses, feel the hope in despair, and understand human desperation to control what you can influence.

There were some personal relationships sentences here and there that I felt should have been under the editor’s Sharpie, but the scope of the scholarship seems to otherwise be significant and strong. At other times, I found personal life applications for some of the homily-style wisdom in these pages.

I listened on Audible. This was a slight disadvantage as I do not have a visual to spell some Yiddish names or phrases in the book. A Kindle/paper copy to accompany Audible might be a good idea, especially for people who are reading this book for school/university/research purposes. The Audible delivery, was, otherwise, without deficit.

An important and trajectory story