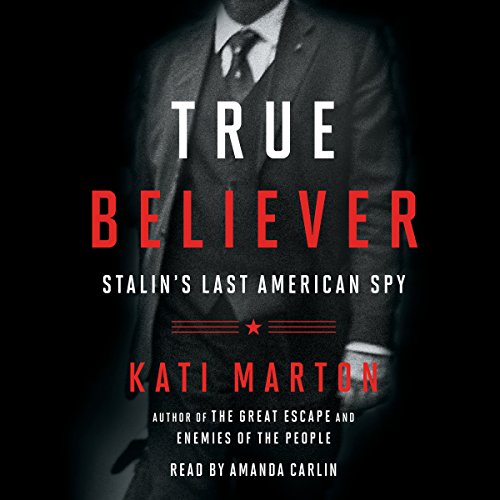 This astonishing real-life spy thriller, filled with danger, misplaced loyalties, betrayal, treachery, and pure evil, with a plot twist worthy of John le Carré, is relevant today as a tale of fanaticism and the lengths it takes us to.

True Believer reveals the life of Noel Field, an American who betrayed his country and crushed his family. Field, once a well-meaning and privileged American, spied for Stalin during the 1930s and '40s. Then a pawn in Stalin's sinister master strategy, Field was kidnapped and tortured by the KGB and forced to testify against his own Communist comrades.

How does an Ivy League-educated, US State Department employee deeply rooted in American culture and history become a hardcore Stalinist? The 1930s, when Noel Field joined the secret underground of the International Communist Movement, were a time of national collapse: 10 million Americans unemployed, rampant racism, retreat from the world just as fascism was gaining ground, and Washington - pre-FDR - parched of fresh ideas. Communism promised the righting of social and political wrongs, and many in Field's generation were seduced by its siren song. Few, however, went as far as Noel Field in betraying their own country.

With a reporter's eye for detail and a historian's grasp of the cataclysmic events of the 20th century, Kati Marton captures Field's riveting quest for a life of meaning that went horribly wrong. True Believer is supported by unprecedented access to Field family correspondence, Soviet secret-police records, and reporting on key players from Alger Hiss, CIA Director Allen Dulles, and World War II spy master "Wild Bill" Donovan to the most sinister of all: Josef Stalin. A story of another time, this is a tale relevant for all times.

What listeners say about True Believer

Another example of the principle that placing my trust in anything or anyone on earth leads to a misspent life and tragedy.

Fantastic book. Couldn't put it down. Marton did a very good job of researching this important and intriguing story.

Written excellent and the narration is delightful. The book starts out slow and at times does not seem to be about the spy. It all comes together very nicely.

It will pull at your heart strings and put a personal perspective that is uncommon. Excellent read/listen.