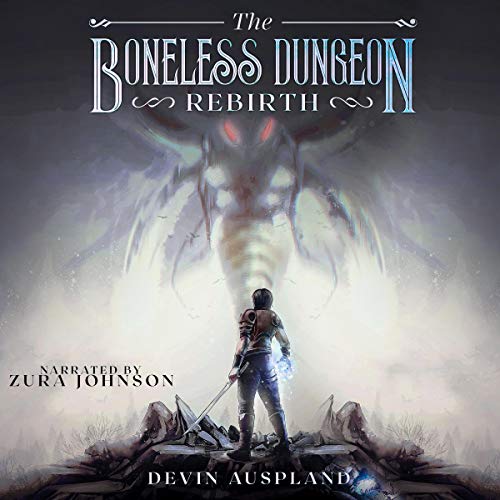 By: Devin Auspland
Narrated by: Zura Johnson
Try for £0.00

In a world of sword and sorcery, Breck died and was reborn as a dungeon core, a specialized living gem in charge of creating and managing a dungeon. Unlike most dungeons, he was handicapped with the inability to create bones, the very building blocks that comprise most living creatures. Breck just wants his life back, his humanity, and will do whatever it takes to achieve his goal. Even if that means killing the hordes of adventurers that want to plunder his depths so that he can gain the power to transcend.

Zach, a new adventurer, is given the quest to find the source of new cosmic energy that has made itself known, the same cosmic energy that creates dungeon cores. It’s the lucky break he’s been waiting for his whole life. But he’ll face opposition that will see him dead before they let him complete his quest.

Despite his inability to create monster’s with bones, can Breck gain enough essence to rank up and become human again or will he be forever trapped as a dungeon? Will Zach be able to live long enough to complete his quest while other guild members are hunting him? What happens when Zach’s and Breck’s paths collide?

Find all this out and more in this exciting GameLit, The Boneless Dungeon: Rebirth.

What listeners say about The Boneless Dungeon: Rebirth

This book has a few new ideas on the dungeon core and hero, but maybe has not enough of them and the characters are not overly interesting. This makes the story progression a bit boring or slow.

It doesn't help that both the dungeon character and hero each have their separate origin story, so by the time one gets to some action, the others beginning exposition starts.

Unfortunately, both are also a bit of a 'Mary Sue', generally good but clueless guys and things just happen to them. Neither have any personally traits that drive them.

I hope this gets better with the next books, but I kinda don't feel like finding out.

I definitely enjoyed this book. I look forward to the next one to see what happens to the dungeon and Zack

I liked the story but felt it could have done with being longer. More time in the dungeon experimenting and growing, and some more personal time between characters.
Narration was good and would like to listen to the second book.

I couldn’t stand the narrator

The book was... okay... but the narrator made it worse. I tried but i couldn’t stand it.

Skip if you are looking for a dungeon core book

Really felt this was a bait and switch. Started off focused on the person pre core, brief transition to core, then after a few chapters started following an uninspiring ‘adventurer’.
This ‘stumbling into success’ hero takes up most of the rest of the book with a few interludes to catch you up on the dungeon.

Seems like the author liked the idea of writing about a dungeon core, or thought it was a good hook to get readers, however it’s really a cliche orphan bumbles to greatness with his misunderstood but super wise mentor that follows him around along his doting girlfriend. The girl btw is literally a porter for him.

Narrator is good, for what she is given.

But your credit is better spent elsewhere.

It's ok. Not great, not bad. Just a little frustrating for someone who's listened to other dungeon core books since you have to wait for him to figure out stuff we already know to do. It would be good as a primer to get people into the dungeon core genre.

This is a unique approach to Dungeon core. It is unless any other I have ever read, and it was great I can't wait for more of the series. It is refreshing to find something totally unique in dungeon cores.

First Time LitRPG book for me

This was my introduction to LitRPG as a book genre, and I have to say that I absolutely love it. This book captured my attention from the first chapter and held it throughout. I really enjoyed it and cannot wait for the next book in the series! The narrator was FANTASTIC! What a great job she did (especially with the Anthronoid character!)

This is a stand alone instant classic for any fan of dungeon core/game lit!

Love it...Great Dungeon Building, interspersed with a bit of road bound adventure. The characters are well fleshed about and the story does not lag. I enjoyed this book thoroughly. I cannot wait for the next book!

I've only recently gotten into dungeon core novels and found this particular story to be a wonderful addition to my growing collection! I enjoyed the split between core and adventurer and felt it added a fun twist to this genre.

Highly recommend! Especially for those new to the genre!

The story was dun and the characters developed overall but there was one thing early on that broke me from the believability of the story. At one point the human MC Zack says that he "sounds like a broken record player." On its own that isn't a bad saying but the world this takes place on is not earth and didn't develope scientifically but nobody asks Zack what a record player is or what the saying means.

*Spoilers*
The last chapter revealed that Zack is from earth so I guess the record player comment could have been foreshadowing, but I don't like how it was implemented
*Spoilers*

A to the point story. I like the characters so far. Story is interesting but also laid back. Can’t wait for book 2