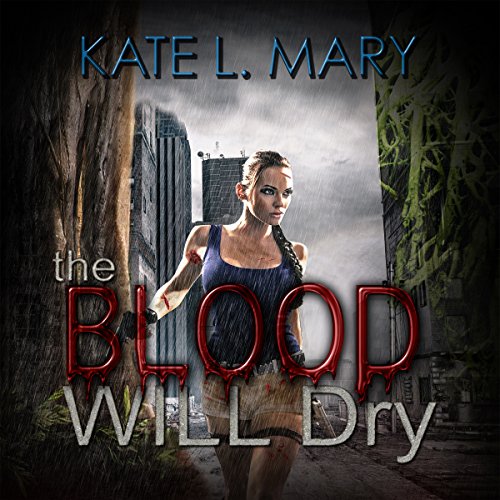 The Blood Will Dry

Five years after an alien invasion, the Earth is unrecognizable. The human race has been decimated and the sun completely blotted out by dark clouds that bring constant rain. All indigenous plant life has been killed off and replaced by vegetation that has proven to be as deadly as it is invasive, and the aliens that have taken over the planet are seemingly invincible.

Living in a crowded building with other survivors, Diana Foster wants nothing more than to forget what she lost the day the aliens arrived. But an incoming platoon brings a familiar face, one that not only opens old wounds, but also forces her to deal with the painful memories she's worked hard to forget. Bryan may not be the same cocky kid he was before the invasion, but his sudden appearance still turns Diana's world upside down in ways she never expected. When he showed up she knew it would mean finally facing her past, but she never thought she’d find a future that was actually worth living.

After years of struggling to find a weakness in the aliens' defenses, Diana stumbles upon a solution just as a new and more deadly threat surfaces. Faced with an attraction she never expected and a battle that most believe can't be won, Diana must work through her painful past as the survivors mount a battle that may determine the fate of mankind. If her plan fails it very well could be the end of humanity, but if works it will mean having a real future, and a chance to allow the blood to dry once and for all.

What listeners say about The Blood Will Dry

Bring your box of tissues, the emotion this book provoked from the first page had me balling my eyes out! The heroine's Diana, story is beyond heart breaking as she relives the day of the attack, and how she has been 'numb' for five years, the arrival of Brian being the catalyst to shock her into facing her loss. I really liked Daisy, Diana's friend and the other half of the 'double d', together they stumble on the answer to their fight, after Diana goes full on 'rodeo' on a bug! This book is an emotional roller-coaster and a great read, and should not be missed!

Five years after an alien invasion, the Earth is unrecognizable. The human race has been decimated and the sun completely blotted out by dark clouds that bring constant rain
amazing book could not stop listening did not get any work done till I finished the book in 1 sitting

Couldn't put it down. This is a must listen. The narrator does a good job of keeping it real. Great Storyline.

This is a straightforward romance-in-the-midst-of-an-alien-invasion story. The narration was well done, with the voice believable and authentic-sounding for the heroine of the story. The aliens and the setting were well described; I could easily imagine what the author was describing. The only reasons why I didn't give the story more stars were because: 1) I didn't find the insta-attraction storyline believable, given the previous history of the two main characters (although it may be more believable for the age the heroine is?); 2) for an enemy that basically walked over humanity for the previous five years, the alien hive was almost too easy to defeat; and 3) it was hard for me to believe that after five years there wasn't a more structured communication system in place across the region - things like ham radios, information couriers, and so on. The resistance seemed to me to be somewhat scattered and I guess I figure something would have been established by the time the story took place. As other reviewers have mentioned, the main character's sidekick sounded like a really interesting person; it's too bad we didn't get to spend more time learning about her story and the development of her romance. I'm not necessarily a huge fan of multi-series romance novels, but I think that if this story had been developed into a duology or trilogy, the author would have easily been able to address each of the points that I've made here (and I think she would have done a great job with it, given her style of writing.).

I REALLY LIKED THIS, AND HOPE WE GET MORE!!

I thought this was a very well crafted world, with good characters...a little sexy time and a whole lot of alien weirdness!! Diana an her husband are young parents, then one day their world literally explodes...Diana is left alone in an alien invaded world and is just doing her best to survive...her and her best friend Daisy are in a secure location...surviving...and a troop of the resistance come through to rest and get cleaned up...he sees him,...her husbands brother and she has to relive that painful day again...but she also finds love!!! I hope we get a book 2!!!

A slow start for this fan

I've been following this author since I discovered her Broken World zombie PA series, which I would rate 5-stars. I was excited to start a new series....but just could not get hooked on the plot or connect with the lead character, Diana Foster.

I'll admit I enjoy a plot-driven story more than a character-driven story, and the first several chapters and scenes are character-driven. Five years after Diana has lost her husband and infant daughter in the alien attack that devastated Earth, she is a loner still grieving her loss. For this reader, Diana's suffering came across as unsympathetic and contrived since virtually everyone on Earth has suffered this same devastating loss. There are several scenes in which Diana avoids her brother-in-law because she's nursing a five-year grudge about how he and his parents treated her and because she can't bear to re-open her painful heartbreak (although IMO Diana is clinging to this grief, making her appear to be a martyr.) When she runs into her dead husband's brother, there is also an insta-attraction which doesn't work for me, given the premise she's still not over her husband. Diana does not genuinely seem invested in fighting the aliens or battling for mankind's future, given the lengthy buildup that casts her as a loner, introvert, withdrawn individual who shares very little with her remaining compatriots.

There was also a significant delay before the author explained the exact nature of the cataclysmic event. It was hard to engage in the story when I was wondering about "what happened".

I'll continue to read this author, but this book wasn't a favorite.

The narrator was professional in her delivery - tone and inflection varied and the pacing was appropriate. She did a nice job differentiating between the characters. I felt she sounded a bit older than I imagined the character to be.

We’re invited to another heart-warming story from one of my favorite authors, Kate L. Mary. This one is a stand-alone dystopian/sci-fi survival tale. Our protagonist, Diana Foster is a young woman coming to grips with the deaths of her husband and daughter in the opening volley of an alien invasion. Five years have passed since that day and the battle with the aliens has not improved since then. The survivor’s attitude towards the aliens has entered a state of lethargy, similar to Diana’s grieving process and feelings of remorse. As the story unfolds, we’ll see the comparison between the survivors dealing with the aliens and Dianas’ coping with her loss. It’s a wonderful story of devotion and strength; and why Kate L. Mary is one of my favorite authors. I was given this free review copy audiobook at my request and have voluntarily left this review.

a very nice well written story .. I loved it .
It was very good and even intense in parts
the narrator did a good job as well
I was given this free review copy audiobook at my request and have voluntarily left this review.

I absolutely love everything she writes!

She is an amazing author. I’ve read many of her books and all within a few months. Love it!

This story is extremely well written and narrated. It starts off sweet and then the invasion starts leaving the main character heartbroken. The story then jumps to five years into the future. Which is when the story gets more interesting as it goes along. This storyline had me intrigued and sweating bullets through out the book. I could not stop listening, I had to finish the book in one sitting. The story will have you on the edge of your set.
Kate L Mary has a fantastic imagination and she definitely has a great talent for telling an amazing story. She creates a unique world with away of making you able to envision the people and scenery.
The narrator does a fantastic job with the characters and voices of each character making it easy to distinguish between the characters. She is fabulous at the different voices. I would definitely recommend listening to this narrator.
I would definitely recommend this audiobook ( the one warning I will advise is hopefully you are now squish. )

Fun alien invasion romance. Cool aliens and poisonous alien plants on the loose! Love the whole dystopian setting for these types of invasion stories! Enjoyed the connection between Diana and Bryan; sweet and I liked the backstory between them. It’s 5 years after the invasion, and society isn’t exactly doing well; they don’t really have a good way to combat the aliens, so casualties have been high. Diana, who is our only POV for this story, suffered a huge loss when the invasion happened. She’s dealing with the loss, but still holds a lot of grief. When a familiar face from before the invasion appears, she’s both happy and unsure because Bryan wasn’t exactly a nice guy to her before the invasion. I wasn’t a fan of how quickly things progress between Diana and Bryan; I felt like there needed to be more of a conversation about the past, but I do like them together. I also wasn’t a fan of how many times it’s mentioned that Diana’s best friend likes to sleep with lots of guys; once would’ve been sufficient or how about not having the stereotypical easy best friend at all. Other than those couple things, the rest of the story is an entertaining alien adventure! Loved Diana’s strength and how she handled things. Fun alien action too!

Listened to the audio on Audible. Narrator did a great job. She fit Diana’s character well and gave a performance that added to the story. Good listen!

The Blood Will Dry is another well-composed sci-fi alien tale by Kate L. Mary. She is one of my favorite authors, never failing to deliver. The characters are well-developed and well rounded with great depth to their personalities. The storyline will suck you in from the very start, as the main character Diana learns to survive in an alien invaded world.

Natalie Duke's performance is outstanding. She does an exceptional job with the characters' voices, emulating their emotions and moods. I enjoyed this audiobook from the start to end, and I highly recommend it. I was given a free copy of this audiobook at my request and have voluntarily left this unbiased review.

I love this author because she combines 2 of my favourite genres, apocalyptica and romance. This book balances the 2 nicely, I was engrossed from start to finish!