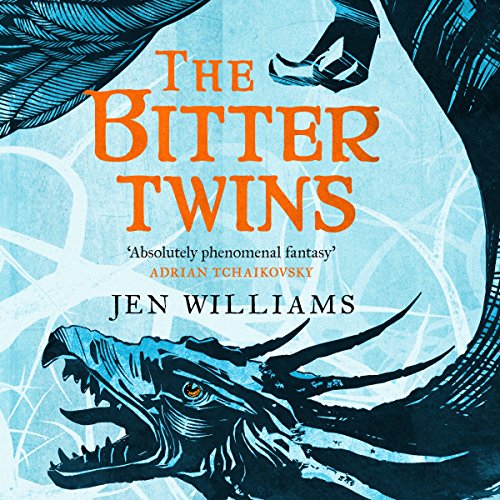 By: Jen Williams
Narrated by: Jot Davies
Try for £0.00

From Jen Williams, highlyacclaimed author of the Copper Cat trilogy and three-time British Fantasy Award finalist, comes the second novel in the electrifying Winnowing Flame trilogy - the sequel to The Ninth Rain. Epic fantasy for fans of Robin Hobb and Adrian Tchaikovsky.

The Ninth Rain has fallen. The Jure'lia are awake. Nothing can be the same again.

Tormalin the Oathless and the fell-witch Noon have their work cut out rallying the first war-beasts to be born in Ebora for three centuries. But these are not the great winged warriors of old. Hatched too soon and with no memory of their past incarnations, these onetime defenders of Sarn can barely stop bickering, let alone face an ancient enemy who grow stronger each day.

The key to uniting them, according to the scholar Vintage, may lie in a part of Sarn no one really believes exists - a distant island, mysteriously connected to the fate of two legendary Eborans who disappeared long ago. But finding it will mean a perilous journey in a time of war while new monsters lie in wait for those left behind.

Join the heroes of The Ninth Rain as they battle a terrible evil, the likes of which Sarn has never known.

"An absolute joy to read...jam-packed with breath-taking inventiveness." (James Oswald)

What listeners say about The Bitter Twins

found it rather dull (spoilers)

I enjoyed the ninth rain well enough but hoped that I would.find like the characters more in this book.

unfortunately I still found them largely annoying to be around and I did not care that much of their plight. The story I think was not paced well and nothing much happens for the first.half.to three quarters.

The final battle.was entertaining enough but it did not salvage my.opinion of this book.

The one character I genuinely was interested in from.tje first one was Agent Lin. But she was killed off needlessly (in my.opinion). I hoped she would.make a comeback in this book but she does not.

The narrator is clearly gifted and threw himself into thr story but I found his scenery-chewing narrating tiresome. I wished he would keep a more consistent tone as it became hard to follow for the more softer spoken dialogue.

I think the next instalment promises to be more interesting with Noon probably confronting the Winnery which would make for a more fulfilling plot.

Getting deeper in the world of Saarn

The second book is as good as the first one. It builds up the world perfectly and we learn more about the history.

Sort of a spoiler alert :
.
.
.
.
.
.
.
.
The storyline is more or less predictable, there isn't really a big surprise or drama, just an excellent story.

strange how a single character can ruin everything. aside from that, the world is paper thin. hints at kingdoms and governments in one or two words but the world has no solidity. there's no server of threat from the invading faction, they don't do anything except steal some clothes.

Excellent 2nd book. 3rd book purchased, downloaded and ready to press play for what I'm hoping to be an explosive final book. I can't wait.

Just as good as book 1 - The Ninth Rain. Excellent cast throughout although Noon is my favourite. An honourable mention to Vintage’s exclamations which are often laugh out loud funny. It keeps up the pace of book 1 with no sagging.

I listened in conjunction with reading the Kindle version because I just had to keep going. You have to know what happens next as you have no idea where Jen Williams is going to take the story making the whole thing a joy from start to finish.

Jot Davis’ narration brings everyone to life with his narration and giving the Eborans a rich Welsh accent is a master stroke. And as for his voice for Helcate - so cute. When I switch to Kindle I have Jot’s voice in my head.

I’m moving straight onto book 3 but I of don’t want to as I really don’t want the story to end.

The second installment of this trilogy brings back the characters you fell in love with in the first book and some how makes you fall in love with them all over again.

While the story flows well enough it relies on facts only applying some of the time and characters acting irrationally. The individual events are well written but the setting is poorly thought out. Reading is high quality.

A great read, carries on the trilogy with no lessening of imagery, the strength of the opposes, and the price they paid in the face of unequal odds.

The book is a good follow up to the first. The story digs deeper into the history of Saarn and of the invaders, instilling the same sense of creeping Lovecraftian doom. The vistas are equally capable of driving anyone mad, the decrepitude of Ebora is equally moldy, and the crawlers are equally eldritch. We get good looks at the queen, the behemoths are not only well explored but full of exciting secrets and surprises etc. Vintage is still Vintage and new characters are developed nicely while some others turn fully villainous. New areas are being explored, including origin island. It's true that the plot isn't as tight and possibly there's too much room for character development that feels like slow pacing.

But the real problems seem to be with the narration. While the narrator's voice is very nice and he's doing the ladies, especially Vintage, very well, he's made some very poor choices. The tall, slim, cultivated, lazy Tor sounds like a giant stupid oaf or possibly Shrek because the narrator lowers his voice to do him. I think the narrator's actual voice would have been so much better because it sounds refined.

There have been times when the narrator is yelling and then whispering. This is very inconvenient and I had to fiddle with the volume a lot especially when listening on speakers at night. I get the idea of immersion but there is such a thing as pretending to whisper or yell without changing volume so much as to make it unusable.

The worst by far are the dragon voices. They all sound like annoyed persons with serious mental development delays. They speak slowly while bellowing horribly even when they're discussing trivial matters. Vostok who is a lady still sounds like a man. Just no.

I can't tell if the pacing was a bit slow or it was the narration. Everything is read rather slowly and solemnly without any good reason. It makes the story hard to follow and feel like it's moving at a glacial pace. This was again a poor choice, the narration should feel quick and engaging, not like a tedious history book. There's no reason to read description and action at a slower pace than dialogue.

It's a shame because the narrator has really nice voice and that accent could be used to spice things up a lot. With different stylistic choices, the narration could have been superb. It's possible the narrator is trying to copy Michael Kramer which is a mistake because Kramer sounds like a boring self important person who loves the sound of their own voice. He may have been good for children who grew up in the 80, when people had a lot more patience than nowadays and slow boring books by Tad Williams were all the rage but today those books and that narration style are not acceptable anymore.

Disappointed after the good first book

Listened to the whole book although started skipping bits towards the end. Storyline was really basic, apparently this massive world wide war, only actually involves about 10 people. Lots of gaping holes in the story. Shame, first book was enjoyable but the transition from a group of travels to the next stage is badly thought out. Won't be buying the third book.