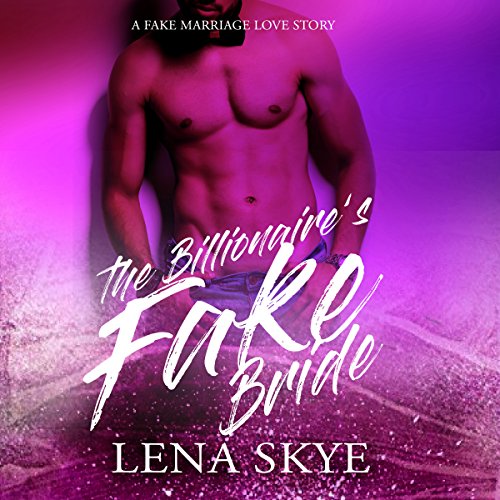 Sasha Evers was a history major from Boston who kept herself to herself and often struggled to make ends a meet.

So when a lucrative opportunity came up to be the pretend temporary bride to a mysterious British man she simply could not turn it down. The money was life-changing.

However, Sasha really had no idea what she was letting herself in for.

The man she was set to be the pretend bride for was a billionaire called Landon Carmichael and this meant her life was about to change more drastically than she could have ever imagined.

Fans of Fifty Shades of Grey will love this light hearted comedic twist on the average billionaire romance theme!

What listeners say about The Billionaire's Fake Bride

I had initially rated this book with 5 stars, but I ended up changing it because no matter how much I loved how it all unfolded, I had to admit there was something irking me: the inconsistency of the pace. The plot unravels with several ramifications that, at first glance, only deter from the main storyline. Or at least the one I deemed main in my head.
But they did enrich a captivating world, so I partly appreciated it. However, I still found myself wishing more exciting things happened. I just felt that not all of the wheels set motion fully got up to speed.However Character and world building were great and I would happily read Lena Skye again.Connor Brown was fantastic to listen to and grabbed my attention from word one.I was voluntarily provided this free review copy audiobook by the author, narrator, or publisher.I received this title for free in exchange for an unbiased review.As always this is my honest opinion

This was an okay listen. I kept looking for some kind of spark but the story kind of fell short. The narration wasn't too bad.

Listen to an audio sample before jumping in

This book, while pleasant, fell short of my expectations. I felt the narrator was very monotone and the dialog was very simple and not very entertaining. That's my opinion and I'm sticking to it.

The narration was outstanding! I loved all his different voices and it brought the story to life. Connor is a fantastic narrator.

The author did a great job with this book. The characters are well developed and likable. The story moves at the perfect pace. I had a hard time putting it down last night! I went to bed several hours passed my bed time because I was enjoying the story so much! I'm definitely going to look for more books written by this talented author.

This is such a heartwarming romance that has your attention all the way to the conclusion. It is a HEA with a wonderful conclusion.

I was provided a copy through AudioBoom for an honest review
This is a first listen for both the author, Lena Skye and narrator, Connor Brown. The story was nice, not edgy in any way for me but nice. The challenge for them to stay as a couple I did not have complete buy in on and why people close to the couple were against it (except Grandma!). The narrator did an excellent job, although I didn’t feel like I was listening to a Brit with the male lead, that didn’t deter the listening in anyway, except when I was reminded he was British. I will definitely look into listen more from both Lena Skye and Connor Brown!

This was just a fun and enjoyable story. A little more lighthearted romance without a major amount of angst. Perfect for those days when you want a good story without constant drama. Don't let the lack of major angst and drama throw you off. While the plot may be a bit predictable it's an entertaining and enjoyable story with enough little bumps and twists to keep the story interesting. It's reminiscent of a Pretty Woman type scenario.

How far would you go to get a little peace and quiet? A little slice of normal? There are actually people in the world who have no idea what celebrity is who. I'm one of them. Which made the story that much more plausible and fun for me.

While there is an attraction between Sasha and Landon that first kiss starts off a chain reaction of desire and want. When the attraction builds a simple business arrangement becomes a much more unexpected and intimate affair.

While there is a little bit of steamy romantic goodness it is not a major part of the story and is no where near (thank god) anything resembling Fifty Shade which is referenced in the synopsis.

Instantly likable cast of characters that are fun and interesting. Sasha, Landon, Nigel and even Sasha's "dream team" were all great characters.

Connor Brown did a great job with the narration as usual. Nice voice that is easy to listen to for long periods of time. The narration is clearly spoken with a nice smooth pace. Enjoyable slight English accents. Great character voices. Even his female voices were good. Gail's voice was grating and annoying but it fit her character, so it was perfect. He was able to bring the characters and story to life. Very enjoyable

Where does The Billionaire's Fake Bride rank among all the audiobooks you’ve listened to so far?

I was given this free review copy audio book at my request and have voluntarily left this review. This book has a really good story line. The characters are funny. Overall good escape story. You won't be disappointed.

The narration didn't match the characters name. Sometimes a little too much emphasis

Lena is very good at setting up her characters and describing them throughout the story. She is very descriptive which can be good but it also makes the book very long at times.

To me the story was a little slow and it either needed something to help add to the storyline or it could have been shorter. There were a couple twists but to me they were predictable so I didn't feel that drawn into the storyline.

Could you see The Billionaire's Fake Bride being made into a movie or a TV series? Who should the stars be?

I can because it's a romance story that is setup perfectly for a movie...girl needs money, she agrees to be a fake bride to a star and they fall in love in the end. It's a classic "chick flick" as many would say since it's what many women would love - to fall in love with a Billionaire/movie star by chance.

I was voluntarily provided this free review copy audiobook by the author, narrator, or publisher for my unbiased review.

I received this audio book free for an honest review. I really liked this story. Lena Skye is great at creating very interesting stories. I thought this was going to be a very superficial story, but it wasn't. Although it was a bit far fetched, it was enjoyable. Who knows, maybe it could happen. The narrator did a great job with the characters.

Connor Brown was great. As this was my first listen of this narrator, I was pleasantly surprised to find that I like his voice. Great Story Funny and sweet. I was voluntarily provided this free review copy audiobook by the author, narrator, or publisher.

Poorly written. This author doesn't know how to construct a good story. This is horrendous, please invest in an editor. Please