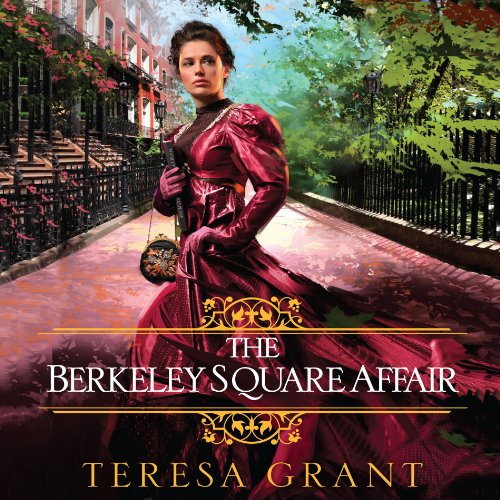 A stolen treasure may hold the secret to a ghastly crime.

Ensconced in the comfort of their elegant home in London's Berkeley Square, Malcolm and Suzanne Rannoch are no longer subject to the perilous life of intrigue they led during the Napoleonic Wars. Once an Intelligence Agent, Malcolm is now a Member of Parliament, and Suzanne is one of the city's most sought-after hostesses. But a late-night visit from a friend who's been robbed may lure them back into the dangerous world they thought they'd left behind.

Playwright Simon Tanner had in his possession what may be a lost version of Hamlet, and the thieves were prepared to kill for it. But the Rannochs suspect there's more at stake than a literary gem - for the play may conceal the identity of a Bonapartist spy - along with secrets that could force Malcolm and Suzanne to abandon their newfound peace and confront their own dark past.

What listeners say about The Berkeley Square Affair

History rather than Georgette Heyer style?

As a bedtime reader I frequently have to pick my way back through a story to get back on track - simply because I have fallen asleep through no fault of the book - I was unable to do this with this book. Either my knowledge of the Napoleonic Wars and the Irish Easter Uprising were insufficient to keep me up to speed with the plot or the author should have explained the background more fully - I'm truly not certain which.

Overall a good book. I had a hard time getting into it and put it aside for a while. I'm glad I gave it another shot.

Don't read this if you haven't been following the series. This book wraps up some plot lines- and opens up a few more. Malcolm and Suzanne have to weather that major issue that's been hanging over their heads. Will they manage it?

All the previous characters are here. This narration was excellent. Except for the trouble I had with the beginning this would have been a 5-star rating.

I only wish the subsequent book was available in audio format.

Great story, a number of surprises

The series is filled with warmth and surprises. This story is interesting and held my attention until the conclusion. It can be read as a stand alone book, but there are references to previous novels. I highly recommend reading this book as well as the others in this series

Love the stories. The Raoul, Malcolm, Colin relationship is pretty implausible but plot twists are good I guess. Good "read".