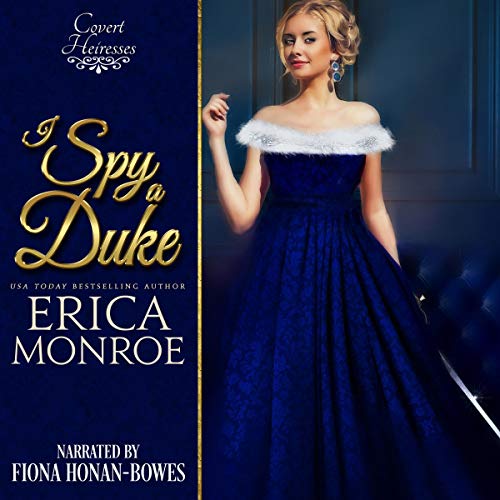 By: Erica Monroe
Narrated by: Fiona Honan-Bowes
Try for £0.00

In the first in an adventurous new series, USA Today best-selling author Erica Monroe introduces the Covert Heiresses: women who by day are the talk of the ton, and by night England's top spies.

When bluestocking Vivian Loren becomes the governess for the wealthy Spencer family, she's hunting for clues about the murder of her brother, not romance. But Vivian didn't count on one thing: James Spencer, the intrepid Duke of Abermont, who has a tortured past of his own.

He needs a wife

As head of Britain's elite intelligence agency, James can't afford the scrutiny the Marriage Mart would bring to his family once the season starts. After discovering Vivian's quest for vengeance has made her a pawn in a treacherous plot of one of Napoleon's most deadly spies, James realizes they can help each other. She'll become his duchess, and he'll keep her safe.

What begins as a marriage of convenience quickly becomes anything but as the enemy spy closes in on them. When both husband and wife have dark secrets, love may be the most dangerous mission of all.

I Spy a Duke is a dark, sexy Regency romance with suspense elements. While it is book one of the Covert Heiresses series, it can be read as a standalone full-length historical romance.

I did enjoy this story but it did seem to lack pace in parts. It started off really well with a tense introduction to James Spencer , Duke of Abermont and his sisters. Then when the governess Vivian was on a secret mission to enable her to discover who had murdered her brother, this was engaging. It was the lead up to the marriage and after that, the pace slowed down. However, the ending was dangerous and exciting. The sisters of the duke seemed very interesting and unusual characters. I liked the relationship between James and Vivian.
The narrator read well and she did vary the speed, particularly at the end to make it more meaningful and exciting. She also deepened her voice for the male characters.

looking forward to the next one in the series

Fiona Honan-Bowes (Narrator - 3 stars - read with a lot of emotion, but very little distinction between character voices)
-----
First time reading a book by this author, and thoroughly enjoyed the intrigue, suspense and mystery of this story. Looking forward to the next book in this series.

I listened all the way through and wonder why it's hard to stop listening once I've begun a story, even when the narration makes me grimace over and over. And when the narration isn't objectionable, the plot goes daft. The narrator has no male voice. When the H and h are having a conversation, there's no distinction in the voices. At times, I thought the H voice even sounded more female than the h.

When a family has been spies for the last 100 years, they just shouldn't act as amateurly as these guys do.

I say listen at your own risk of feeling smarter than all the characters in the book. Also, I recommend listening at 1.20 speed at least and be warned that you won't hear anything that sounds like a male voice.