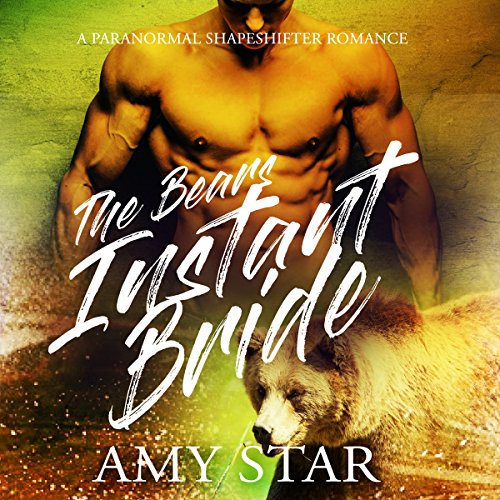 Cara Foster had given up on life. So much so that she signed up to be a mail order bride in order to finally meet a man that wanted a family. Nothing else had ever worked for her, after all.

However, Cara did not expect that a gorgeous man called Holt Carson would instantly propose to her and have her walking down the aisle within a week. And she certainly did not expect a big surprise on their wedding night when she saw Holt naked for the first time and discovered his furry little secret. Can being a mail order bride to a Werebear really work? And just why was Holt so eager to make Cara his bride so quickly? The answers would soon reveal themselves and they would be truly shocking!

What listeners say about The Bear's Instant Bride

I enjoyed the authors characterization of Cara anyone who would pour their love and time into caring for their grandparents deserves a happily ever after. The magical aspects were a little unbelievable but charming. The Narrator brought the book to life she was great.

I’m not usually a fan of these types of books but have to say - really enjoyed it! Loved the subtle humor in it and the narrator, Evelyn Marcail really made it come to life. Easy to listen to. Very clear and friendly. Seriously... a positive experience!!! Buy this and enjoy!!

This book was pretty good. Cara signed up to be a mail order bride and Holt had her walking down the aisle within a week. On her wedding night, she found out about Holt’s secret. What was Holt’s rush?

Evelyn Marcail did a good job with the narration. I received this free copy audiobook at my request and have voluntarily left this review.

The story idea is good. The text needs some serious editing. It reads more like a first draft than a final version. There should have been far more of the characters doing than the narrative explaining. Far to much unnecessary detail was included in the background information. Not enough time was spent developing the relationships.

Grammer and sentance structure is everything

Audiobook review - Look, I'm not the grammar police and I don't normally comment on it when I read and review a book unless it really takes away from the overall enjoyment and this one definitely does that. The author constantly slips in and out of fist and second person. She uses "I" ad nauseum as well as "this", "that" "as if", and "such as" back to back to back, where if I heard it again I was going to scream. There's also major structural issues as well.
Besides all the text issues that could be fixed with a good editor, I had issues with the story. Its basically a PNR mail order bride. The world building is weak and the characters are unremarkable. hard pass!

Definitely not your usual romance. A great blend of modern times and ancient lore. Chemistry and the clash of wills. Enjoy!

I did not finish this book, I only managed to get to Chapter 6. I likely would have gotten farther if hadn’t been listening to the audiobook, but I don’t think my opinion of it would have changed much. I would definitely recommend that people not listen to the audiobook, I honestly found it very disorienting. The narrator would pause too long at places and long sentences would become very short and confusing. The narrator also sounds very lifeless, even robotic. I also feel like there were audio issues, I often heard bits of static and the editing of the audio isn't that good. It's obvious when audio got cut and stitched together.

Onto the book itself, I only got as far as Cara signing up to be a mail order bride and getting proposed to. I really have a hard time relating to Cara’s situation or just the way she’s approaching her life. I understand wanting a husband and kids, but the idea of going on a website and essentially finding a person to marry right away is strange. Cara's friend describes the marriage match-making website as “[A website] for men and women who don’t like waiting around for what they want”, which I think would be great if everyone in the world was honest, but anyone can lie on a profile. There are many people that act differently online than they do in person. And while I understand that they idea is that the two people meet in real life and go from there, it doesn’t sound like the “700 matches” that the site boasts took long to really decide if they truly like each other. If you think creating a profile, answering a few questions, and meeting briefly in person is enough to decide if someone is worth marrying, then that’s terrifying. It also doesn't make sense to me when you have a person that wants a loving husband and kids but doesn't want to put in the effort of taking the time to find the right person. A relationship is not built in a day. Very few people can actually get away with meeting someone, hitting it off instantly, and then getting married very quickly. Definitely not saying it's not possible, but this book makes it feel like it happens often enough to be a trend, at least in the book's universe. And I'm sure plenty of people will say &amp;quot;it's fiction, you're not meant to take it seriously&amp;quot;, but there's nothing hot or sexy about un-realistic expectations about relationships.

Cara herself is just confusing. She’s insecure one moment, but then suddenly not the next. She talks about how she hates the small, star-shaped birthmark on her forehead and how she wished she could have surgery to get it removed, admits that other people (like those with face disfigurements) have it worse, but then continues to complain about it?

I can't say much about Holt since I didn't even get to the part where Cara and Holt meet, but it truly does annoy me that Cara's decision to accept Holt's proposal is pretty much entirely based on 1 compliment from him and from his picture. Yet again, you can't really tell what people are like just based on profiles and pictures. Cara's friend says &quot;[Holt's] got honest, warm-hearted eyes. I can see this clearly in his pics.&quot;