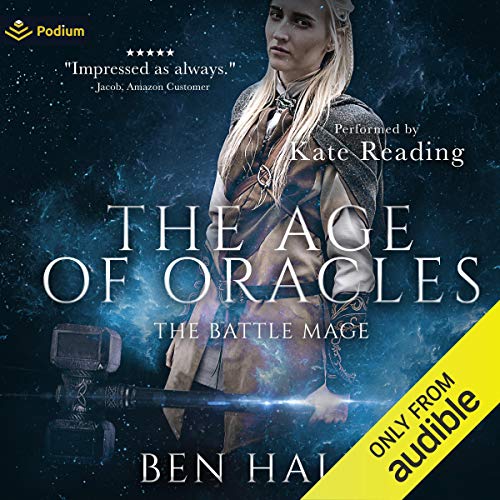 Alydian has shattered her prison and returned to the rebellion, arriving in time to ensure victory at Skykeep. The people now look to her as high oracle, but she is haunted by her escape … and the power she has unlocked. She is not alone in hiding the truth. Her enemies have their secrets, but it’s those of her allies that she should fear.

With the Empire’s might at her command, Teriah gathers her forces for a final battle, but her plan is more sinister. With the aid of a hidden master, she has prepared a devastating plague, one that will bring the rebellion to its knees. Facing her greatest foe, Alydian must discover what she was born to become.

What listeners say about The Battle Mage

Poor ending to the series

What happened in the book? Not a lot. The characters didn't progress. The story didn't go anywhere. We didn't delve into the magical system deeper. I forget what really happened. Very disappointing.

A truly epic story, well told. Full of intrigue, twists and turns, with a beautiful ending.

Mediocre ending to a gripping story

Fantastic narrator and love most of the story. only towards the end there was a lot of cliche and the easy way out, making it feel both rushed and drawn out at the same time.

Again, a good story spoiled by weird affectations of pronunciation by the narrator which were extremely offputting and annoying. The story albeit not overly complex (not required) has good servings of humour and emotion.

I wish I had never started reading this trilogy as I couldn't help but buy the other two books to see how it ended. His characters and plot are so one dimensional and nothing much ever happens. I think I wasted my time staying awake for these books. The narration is grating too.

The end is worth the price of admission!

It’s an awesome conclusion. The trilogy spills easily into the others. I only wish for a reading order, as I’ve been all over the place. There are a lot of books now, so the order matters.

In so many books like this, the author kills off everyone but the main character and his/her love interest. I'm glad this author doesn't do that; there are many heroes that we follow in this book and they're all admirable, and the author manages to keep them alive to live happily ever after. Kudos.

The beginning of a series to rival the Wheel of Time in gripping and non stop action as well as very well thought out plot line. Excellent narration that puts you into the stories so well that, not listening ,nags you into wanting more,more,more and then
DELIVERS MORE.

Took me a while to get into this one but once I did I liked! I loved all of the stories this author wrote. I listened to them out of order and then went back and listened to the ones I read first again. I loved picking up all the Easter eggs I found in the second go round.
This one I tried back when I finished the rest but left it and went to other books then came back and tried it again. I don’t know if it was a change in the narrator but now that I finished the first book I’m all in!

it takes alot for a book to catch me off guard but oh man was I side swiped by that ending. fantastic simply fantasic every book thats tied to this is just as good Ben Hale has out done himself time and time again.

A Beautiful Ending to an Epic Story

The Battle Mage had some twists that surprised me, making the overall plot enjoyable yet left me still wanting for more. Though things are nicely wrapped up at the end, it is the extra little bit after the last chapter that did me in... While this added piece answers a question that was left lingering, it also opened many more.

The narrator has a good range of character choices. The story draws you in. The action points in the book are invigorating.
Loved listening to this!

I love all the mage series from Ben H

this series, as always, did not disappoint in the Leadt.Fantastic writing, fantastic performing Kate reading is one of my favorite narrators! good job guys b