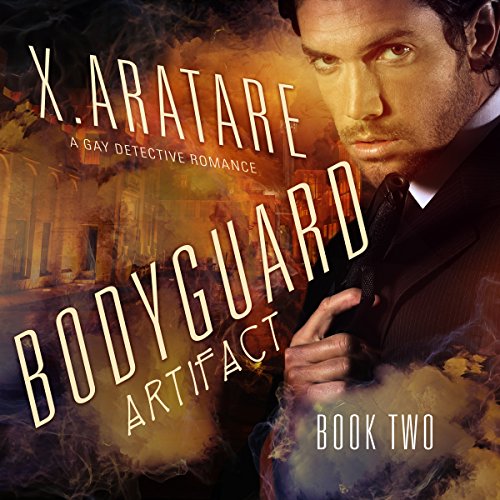 Dane Gareis thought that he would be broken forever - unable to be touched by any man after surviving a terrible assault. But everything changed the moment that Sean Harding became his bodyguard. Though now he faces more danger than ever with the evil Ydrath seeking his life, with Sean by his side and guarding his back he's determined to no longer be ruled by fear.

Sean Harding believed he would always be haunted by the death of his old team on the police force by the mysterious Scarred Man. But now he is ruled by a passion to keep the beautiful and brilliant Dane Gareis safe from the Ydrath at all costs. His past, however, is not so easily escaped.

The danger he and Dane face is connected to the Powder that nearly took his life, but left him with inexplicable powers.

This was an excellent sequel; can’t wait to get to the next book in the series. I do miss the previous narrator but this one was still able to take me into the story. Love this author’s work!

I loved the whole book. I will be relistening to it. Shawn and Dane's love story is amazing. Their bond is strong, believable and enables them to not only stay together but help save the world. And continue protecting it.

Update: I'll leave my original review here but I want to make it clear that I have completely changed my opinion on the narrator. Pauley's style took me a little bit to get used to but he has become someone I quite enjoy listening to now. I think the hardest thing was getting used to that change between the 2 narrators as I mentioned but having listened to him in a couple other books and then going back to this series I find that I no longer have any issues with it. I can't wait for the final book and the series as well as a few of Pauley's other books are on my frequent listen list.


*sigh* why the narrator change? I still like the story, Raythe is awesome, and I will be listening to it again even with the change, but I dislike Pauley's monotone narration. The distinction between character voices is done well enough but there's just something missing from his overall performance. It's also a bit jarring getting used to a whole new set of voices and pronounciation when listening back to back. I really hope it switches back to Chris Patton for the final book.

he did it again

The artifact The bodyguard book 2

LOVE the story HATE the voice

The first book was read by Chris Patten and it's beautiful. He has the most amazing voice and it able to give each character their own voice in a way.

I muscled through this new reader only because I wanted to know what happens next.

The story is wonderful it has all the eerie suspense that a mystery novel needs, but just enough romance and sexual tension that a Romance novel needs. Plus the characters have very real personalities, and such scarring pasts!!!

All in all I wish I had just bought the Kindle version and not the Audible. I just don't enjoy the new voice compared to the old, but it's still a wonderful novel!

The story is pretty good. It's a bit predictable and like all of X's stories ends in a much too abrupt cliffhanger. The narrator though tries for some accents that are so bad they get a bit distracting, particularly the "Spanish" accent for Ferdinand. Also he chooses the most unfortunate way to pronounce Naga that comes dangerously close to a slur at times.

Excited to continue the story

I absolutely love this series of books. This is the 3rd book series that I've listened to by this author and am so far very impressed with their writing style. While I do enjoy this author's erotic stories I also really like the fact that this series has more adventure and thrill than eroticism. The love story is very sensual and heart warming. The story is compelling with very unique elements. This book is also narrated by one of my favorites so that's a plus. The only criticism that I have is that each book is narrated by a different actor.

why Michael Pauley? why?

the narrative for the 1st book was MUCH better. Sorry Michael Pauley, I just cannot. Why ALWAYS so forceful at the end of your sentences? It feels like you are reading a pyramid, sharp and rising. Like you are running out of breath at the end? relax man. I do have to give you props for the improvement in reading dialogue, you do a very fine job with those portions. In other news, X. Aratare is an awesomely creative rockstar! I have broken out of all my normal tropes because of them, I love an author that can make me expand my horizons!