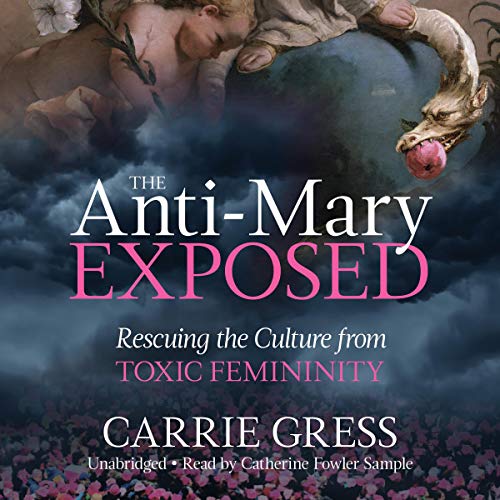 The Anti-Mary Exposed: Rescuing the Culture from Toxic Femininity

In the late ’60s, a small group of elite American women convinced an overwhelming majority of the country that destroying the most fundamental of relationships - mother and child - was necessary for women to have productive and happy lives.

Building off the scriptural foundations of the anti-Christ, Carrie Gress makes an in-depth investigation into the idea of an anti-Mary - as a spirit, not an individual - that has plagued the West since the ’60s. In The Anti-Mary Exposed, you'll learn:

The antidote, of course, is Mary, the Mother of God; the source of the belief that women should be treated with dignity; the beacon of the purity, humility, kindness, and beauty that oppose this sinister force; the perfect model of Christian femininity; and our spiritual mother who leads us to her Son, and to the fulfillment of our heart’s deepest desires.

What listeners say about The Anti-Mary Exposed: Rescuing the Culture from Toxic Femininity

issues of today, very well searched , narrated , and very eye opening i wish all young ladies would read it
in Domino

Benefits of audiobook: cannot throw the book across the room.
Drawbacks of audiobook: the narrator has never actually seen Moana, and doesn't pronounce the names correctly.

I was intrigued by the title of this book and expected it to say something new to help me understand the draw of feminism that I feel in contrast to many traditional Catholics. But the book largely comes across as an arsenal for conservative thinkers to use against "demonic" feminists. There's a point towards the end where she is explaining the birth of the 60's era feminist movement and, while admitting that women were unhappy, suggests that they should have become more conservative rather than fighting for a voice.

Acceptable behavior for women is childbearing and spiritual motherhood. There is NO allowance for womens' vocations outside of the home (despite the author being female and having a prolific writing career). Mentioned as a throwaway are the gains of modern culture such as a woman's right to free herself from domestic abuse. But apparently, by being feminists women (not "true women", btw) are causing unrest in the souls of their husbands so maybe it's all our fault anyway. The advice of this book is to stop seeking satisfaction from anything outside Jesus, Mary, husband and children and I'm the sucker for thinking a Catholic book about feminism would say anything besides.

The best analysis of feminism, over against true femininity, as seen in Mary. Super recommended.

So instead of the Fall, it’s Communism?

Let me first start by saying what I liked, because I truly hate leaving bad reviews. I liked her discussion on Mary and being pro-life. Unfortunately that is about it, as a scholar I found her arguments often quoted people who, one, were not first person sources, two, almost all of her sources were people who wrote commentary, and three, she chose a set time and source for feminism that begins with Communism (this is common among male academics but seldom upheld by female academics unless they are extreme feminist liberals or extreme fundamentalist conservatives). As I felt I had to read this book, I read it all through, and found myself disappointed.

The problem with this in a book is that she is essentially expecting the reader to ignore the history of the Suffragette Movement and lists it as pre-feminism or proto-feminism. She is expecting readers to not know anything about historical figures, whether religious like Helen of Anjou (literally a Saint in the Serbian Orthodox Church) and was born in 1234, or civil and political historical figures like Christine de Pizan born in 1364 who wrote perhaps the first feminist work ever written that countered a male counterpart (Meun) argument that women were seducers and used a common feminist argument that called him a slanderous misogynist, who used vulgar terms and acted inappropriately toward women. Ie Character attack. Given that Meun’s argument was that women cause men to engage in behaviors like rape by being seductive and that men are victims, I think we can safely say that this is a discussion that long predates communism and is one we hear today among meninists and feminists. Arguing otherwise is frankly intellectually dishonest, lacks all integrity, or is very uneducated. When I pick a book with someone with a PhD, like most people I generally assume they are not uneducated, which means she’s changing facts to support her political ideology. This is a sin.

Note, I said political- very little of this book is theology and I frankly would have liked to see more theology. Like I could talk an hour or two about the history of the fall and how it affected male and female relationships throughout different points in history. That is the conversation I expected and would have loved to see.

She talks very little about what a godly relationship should look like between a man and woman, she does not dedicate a chapter to what a godly man looks like, and she discusses more what a godly woman isn’t than what she is. She says only that Godly women are like Mary and talks about who Mary is. Yet Mary, as she is not mentioned very often in the Bible, comes from assumptions in this book. Not a character representation we got from the mystics. This is also, by the way, not the same thing as telling us how to be a Godly female.

But instead it was entirely political. Which I have a huge problem with, because intellectually dishonest pieces that masquerade as religion, create atheists daily. Daily. Daily. I would also like to refer the author to 2 Timothy. Specifically verse 3 and 4. Where we are told to be like a good soldier and to keep our attention on God and not focus on political matters.

Instead, the author chooses to use the time frame of feminism set out by male academics to discredit feminism, so she can push her argument that; modern women are anti-male, all feminists share the same feminist theory, and feminism is a great evil. She makes men victims and she makes men sound a little weak at times. In order to prove that feminism is a great evil she has to limit herself to far left, anti-male, feminists, because moderate feminists do things that very few people would actually object to and she has to ignore historical reasons women had for wanting equality, like “scolding” (the word scold comes from the scold bridle- a practice of putting around a woman’s head an iron birdcage of sorts that either had a spike on a stick that went in her mouth and would pierce her tongue like a knife if she tried to speak or blocked her ability to speak at all, this punishment was prescribed when men did not like what women said and stated they “had a sharp tongue”). But again you are expected to not know anything about inequality during history, how practices like this drastically predated her starting point for feminism, and to blame the poor state of affairs between men and women today to Witchcraft and Communism, rather than the fall. I repeat the last bit: RATHER THAN THE FALL!

And instead, she offers very little other than let men lead and leans toward Fascist ideology. I repeat Fascist ideology which is way worse than Communism. Way more dead people.

Um, I am sorry but, Am I the only human being alive who thinks democracy is a good idea? Who thinks equality is a good idea? And who can recognize that within all these ideologies like feminism and meninism, there are liberal, conservative, and moderate leanings because they involve people and just because some person wants the movement more liberal or more conservative does not mean the theory of an ideology changes? Or that we can label it as all conservative or all liberal?

As a woman, wife, mother, Catholic I find the feminist movement abhorrent, however I never understood how the good of Woman’s Suffrage could be perverted into what it is today. Thanks to this book I now understand! Thank you Carrie for your hard work, dedication and faithfulness

Every Woman Should Read This

Every woman should read this and remember why and what they were made to be.

the truth of feminism revealed!

A big thanks to Dr. Gress for writing this book. People try to bend feminism to make it work for Catholicism but Dr. Gress shows in this book that feminism has destroyed women and families. She points us to the Blessed Virgin as the best example for Catholic women.

Beautiful analysis of the issues plaguing our times, and useful solutions to those problems. This makes a great gift for youth.

I don't know what I thought this book was but it wasn't what I got. No that isn't correct, I thought that I was going to read something about how to be more like Mary and less like the anti-Mary.

Instead this book so far to me is about Democrats and their wrongs. After getting to Chapter 5 it left me thinking, that this book feels like a love letter to conservativism and because it isn't anything like the Democratic party. It feels especially coming off this election season that Republicans devotion to the former President is like them worshipping someone.

In Catholic school and in the Apostle Creed I learned that there is but one God. When did people lose sight of that?

This book is fantastic. I was not expecting to enjoy it as much as I did. The reason I enjoyed this book so much is how much I learned from it. Very informative. Eye-opening, even. This book answered questions I've had about feminism for some time.

So insightful for our times

I will never be able to look at the word "mom" the same because of the value and purpose that Carrie Gress have given to mothers in this book. If you have any doubts about the feminist movement, I highly recommend reading this book immediately!!