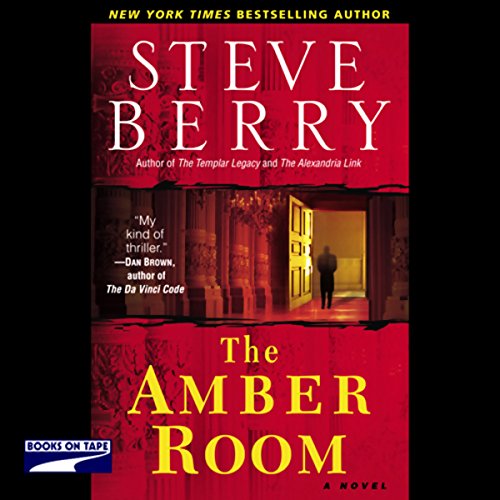 By: Steve Berry
Narrated by: Scott Brick
Try for £0.00

The Amber Room is one of the greatest treasures ever made by man: an entire room forged of exquisite amber, from its four massive walls to its finely crafted furniture. But it is also the subject of one of history's most intriguing mysteries. Originally commissioned in 1701 by Frederick I of Prussia, the room was later perfected in Tsarskoe Selo, the Russian imperial city. In 1941, German troops invaded the Soviet Union, looting everything in their wake and seizing the Amber Room. When the Allies began the bombing of Germany in August 1944, the room was hidden. And despite the best efforts of treasure hunters and art collectors from around the world, it has never been seen again.

Now, two powerful men have set their best operatives loose in pursuit, and the hunt has begun once more....

Life is good for Atlanta judge Rachel Cutler. She loves her job, loves her kids, and remains civil to her ex-husband, Paul. But everything changes when her father, a man who survived the horrors of World War II, dies under strange circumstances and leaves behind clues to a secret he kept his entire life...a secret about something called the Amber Room.

Desperate to know the truth about her father's suspicious dealings, Rachel takes off for Germany, with Paul close behind. Shortly after arriving, they find themselves involved with a cast of shadowy characters who all claim to share their quest. But as they learn more about the history of the treasure they seek, Rachel and Paul realize they're in way over their heads. Locked in a treacherous game with ruthless professional killers and embroiled in a treasure hunt of epic proportions, Rachel and Paul suddenly find themselves on a collision course with the forces of power, evil, and history itself.

A brilliant adventure and a scintillating tale of intrigue, deception, art, and murder, The Amber Room is a classic tale of suspense and the debut of a strong new voice in the international thriller genre.

"Plotted cleverly and written with style and substance. A welcome change from the usual legal-thriller fare from wanna-be Turows." ( Booklist)
"Sexy, illuminating, and confident. The Amber Room is my kind of thriller: a globe-trotting treasure hunt packed with exotic locales, sumptuous art, and ruthless villains. Steve Berry writes with the self-assured style of a veteran." (Dan Brown, author of The Da Vinci Code)

What listeners say about The Amber Room

What made the experience of listening to The Amber Room the most enjoyable?

Another Steve Berry classic. Was a bit sceptical at first, as I've been used to following the Cotton Malone series, but this was no disappointment.
Great storyline, with some interesting historical facts.

While enjoying the storyline and the historical content contained in this book, there were stages when I had to turn the volume down so that I couldn?t hear the narration. I could not accept that a judge, her clerk and a lawyer could act in such na?ve ways as to give vital information to complete strangers. These points of the story lacked credibility for me.
However as I became more involved in the story I did have to search on the internet for more information about The Amber Room to satisfy the curiosity that Steve Berry had generated.
I particularly appreciated the author comments and the interview he gives at the conclusion to the book. I began my enjoyment of Steve Berry?s work with The Templar Legacy and have treated myself to several more of his tales and will not hesitate to continue to source his work, even though there is occasionally some minor item that annoys me!

This is a good listen and has twists and turns that keeps you wanting to spend all day clued to your ipod.
It has a great plot and a fantastic ending,certainly worth listening to again and again........

great reading the story takes you to the heart

A bit slow but once it got going it's good. Amber room is something I've never heard of as well so was very interesting to learn about this.

This is the only download which I have deleted after the first few chapters.
The plot may or may not be based on fact but its' presentation is ludicrous.
Full of comic book characters,cheap sexual titillation, huge amounts of irrelevant padding regarding clothes,furniture,perfumes etc.
The narrator seems to have adopted his European accents from 1940's style war films, at times his accents are comical.
What a waste of time!

Steve Berry is one of my favorite authors because his books are full of little known facts wrapping an engrossing story. This one, however, is just facts in a plodding story that doesn't really capture you until maybe the last hour. I've loved all of his other books. Couldn't wait to be done with this one just so I could listen to one I liked!

I usually listen to audiobooks uncritically; however, this one is so flawed that it fairly yells out for help.
Let me just get this out of the way: many writers have tics, but Berry's is so irritating that it makes ME want to yell out for help. "What had Monica said..." "What was it Churchill said ..." "What had Hitler said ..." Well, good grief, why ask me? Just get on with it and stop asking these posturing questions!
Berry displays such a lack of knowledge of idiomatic and grammatical usage that I want to yank him by the ear and drag him straight to Freshman Composition class. Ever hear of dangling modifiers, Mr. Berry? What was it Strunk and White said ...?
A writer with this many books under his belt should have an editor who knows more about usage than the writer.
What I want to know is, who was the editor of this book? The family dog?
The book has an intriguing premise, but the writing is simply shoddy. The only interesting character is the one who shouts expletives every second or third word. I sympathize with him. Halfway through listening to the book, I wanted to shout the same expletives.

Not a well written book. Truly hated the shallow characters asnd couldn't believe how stupid they were. Still a bit of fun as the story is ok.

Too much vulgarity and sex

This would've been another great Steve Berry novel except for the continual vulgar language and sex scenes
which I found to be extremely unnecessary. I fail to see the need for the language. It had absolutely no bearing on the story and, as a matter of fact, detracted from the story as did the sexual content.

Good grabber at the beginning. Stays strong through the first quarter then... then... Berry maybe went on a trip and phoned the rest in to someone who didn't give a d*mn. Brick is portentous, but then that is his principle talent. Once again Brick reminds me of the background music accompanying a Univision TV drama. You know where the characters are doing one ordinary thing and the instrument noises are fired up to suggest doomsday will break in only instants? His tone always foreshadows impending awfulness is only a frame or two away. But in this case, perhaps Brick's doing his best with the stuff that Berry gave him?

Scott Brick is as good as always

Slow book to start, and not one to download if you're not into a detailed history of art, but the plot thickened nicely and Scott Brick is as talented as always in his narration.

A fun read. Why have I never heard of this Author before? I guess I was under my rock. I thoroughly enjoyed this book. Give this Writer a chance.

a cure for insomniacs

Well written and replete with history. I am excited to see the Amber Room in person.

Well read by Scott Brick and a thoroughly enjoyable read. I particularily like Steve Berry's approach to mixing historical fact with fictional characters and events to make a believable story. His books are quite "formulae" driven but I like them anyway.